Gus handed over the Versys at about 8PM on a rare temperate early April evening. Our test bike was decked in Kawasaki's Candy Lime Green, which was a nice thought after this particularly nasty winter. The weather was perfect, mid-70s, but the sun was going down fast. I had been fighting off a cold or flu all day long, but I thought I’d take a chance on getting in some early evening and night miles before calling it a day.

The Versys is truly a “naked bike” and the tiny shield provides minimal wind protection. Still, I immediately liked the Versys during the downtown freeway-cager-dual. The skinny profile, high seat (33.1"), standard knee-bend, well-positioned mirrors, and quick throttle response puts the rider in a good position to survive urban traffic pitfalls. I headed north of the cities and tooled around a couple of familiar small lake roads.

I compare everything to my V-Strom’s lights and the KLE650 compared well. I’m not a fan of night riding, but if I absolutely had to cover some miles at night the Versys’ lights would make it safe and reasonably comfortable. I kept an eye out for hoofed rats and put in about 60 miles before calling it a night.  The nicely tucked-in signal lights do their job, too. 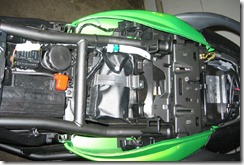 When I pulled into my garage, I took some time to scope out the Versys’ details. The console is ergonomically neat and useful.  The front suspension gives 5.9" of travel and the rear is good for 5.7", pretty similar to adventure touring numbers. The shock has adjustments for the spring preload and rebound damping, as do the forks. The underseat territory exposes easy access to a small tool bag, owners' documents, the battery, fuse holder, and a pair of helmet hooks. There is room under the seat for a decent tool kit. Both levers are adjustable to fit your reach and style of shifting and braking. The rear brake is also conveniently adjustable. After a few moments of fooling with the controls, I had the bike feeling as familiar as my regular ride. The air filter is hidden deep under the tank and plastic, which makes cleaning of that oiled screen device slightly cumbersome. The stainless exhaust/catalyzer is brilliantly contained under the engine, with the output aimed at the ground adding an additional bit of noise suppression that will irritate the loud pipe punks into feats of engineering foolishness. From the side, it looks like the convoluted under-engine exhaust is protected by a bashplate, but it’s just a cosmetic plastic panel hiding the pipe. The exhaust shape does, however, eliminate most of the aftermarket centerstand options. 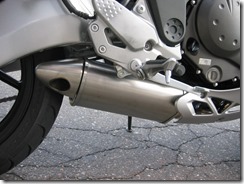 It's hard not to compare the Versys to my V-Strom, so I'll just give in to that fault and make the best of it. The Kawasaki is 28 pounds lighter and has a 5 1/2" shorter wheelbase and a seat height that is 1" taller than the Suzuki. That results in a bike that feels smaller and more nimble. In the garage, standing next to my V-Strom, the Versys looks unnaturally svelte, or the V-Strom looks like something that would invite a verse or two of Sir Mix Alot's "I Like Big Butts." The Versys' narrow profile is perfect for urban commuting, especially if you are lucky enough to live somewhere enlightened enough to allow filtering and lane-splitting.

According to Kawasaki's marketing literature, the Versys (marketing-cutesy-speak for "Versatile System") is a sportbike. The suspension, upright riding position, tall seat height, and styling hint at something else. The KLE650 may be competition for the V-Strom, but the Versys is a different animal. Gus compared it to the early 90's Yamaha 850 TDM, although it might be even closer to the intent of the 900 TDM that Yamaha has kept selling right up to 2009 in Europe and other civilized parts of the world. Kawasaki is not aiming the Versys at the KLR adventurer touring crowd the way Suzuki pointed the V-Strom. This is more of an adventure commuting bike. The roughest road Kawasaki probably intended for the Versys would be cobblestones or practically any St. Paul residential street. The Rest of the World has enjoyed the Versys' ancestor—the KLE500 parallel twin adventure touring bike—since 1991 and, in 2007, Kawasaki replaced and upgraded that versatile vehicle with the 650 which made it to the US in the 2008 lineup.

Kawasaki says, “The Versys was created for pavement riding on back-roads and city roads. As a result, the fuel injection system was . . . fully mapped so the mid-range from 3000-6000 revs would receive a nice and strong response from the throttle.”  I expected a little more bottom end performance, but once I got used to having to rev the motor above my usual shift points I found plenty of performance in the 650 twin. On the highway, 6th gear at 4000rpm = 55mph and 5000 = 70mph. At the end of the shifting cycle, the bike always felt like it could use another gear, but that was partially because I was trying to take it easy during the break-in miles. The mid-sized twin rolls smoothly away from stops at anything over 2000rpm and the power was usable near 1500rpm. If you downshift late, you'll still have plenty of power to pull smoothly through the tightest corners. During my ride, the Versys got 45.5mpg over a wide range of plugging-along-in-town and hauling-ass country road miles. 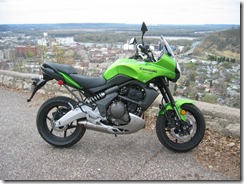 For my test ride, I headed north out of St. Paul into the countryside. The view from the seat is unobstructed by the tiny shield and "clean air" is all that hits your helmet, since the shield is too low to provide coverage or turbulence above mid-section. Taking my favorite two-lanes toward Taylor's Falls, I kept a light hand on the new engine while getting a feel for the bike's handling. Winding my way to Red Wing, I had nothing but fun trying to find the Versys' limits on Wisconsin's county Letter Roads.  Like the late-80's Honda 650 Hawk, the Versys chassis is up for anything the motor can deliver. That adds up to a confidence-inspiring ride providing challenge for experienced riders and fun for newbies. On the way up the viewpoint in Red Wing, I almost touched a toe in the switchbacks. Maybe later in the season, I'll be able to push the bike hard enough to make it work a little, but in April I'm lucky to have moments of mild competence. On the way back from Red Wing, I slipped up and found myself on a fairly hostile gravel road and the Versys handled it at least as well as my V-Strom. I think there is an adventure touring bike barely under the surface of the KLE650's sportbike veneer. 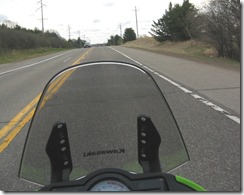 No perfect day goes uncontaminated. By late afternoon, I'd managed to evolve my earlier symptoms into a full blown flu. On a sunny 50oF day, I was shivering from chills, my joints ached, I'd filled the helmet with snot, and I'd coughed and sneezed so often that my face shield was opaque. Even with all of those complaints, the Versys was comfortable. In fact, I think the KLE650's is fitted with the first Japanese factory seat that I think could be described as "competent." I'd put in about 300 miles and 8 hours on the bike with my loaded 'stich courier bag slung across my back for my first "long" ride of the season and my knees still worked, my back was no worse for the wear, and I'd had fun.

In the August issue, Motorcyclist Magazine called the 2008 Versys the "Motorcycle of the Year," which created a blast of late season arguments. When a Versys found its way to the middle of the campground at last year's Boring Rally, it drew a crowd of admirers. Before the recession hit, Kawasaki was bombarded by an email campaign asking the company to bring the Versys to the US. If the economy doesn't do in this effort from Kawasaki, the Versys ought to be a hit. With an MSRP of $7,099, the Versys is priced $400 below Suzuki's popular V-Strom.

Accessory/farkle manufacturers have been busy creating add-ons for the KLE650. Kawasaki/MRA are providing larger windshields and an adjustable top spoiler. GIVI has created tall windshields, luggage, and rear racks. Several companies make aftermarket seats. Zeta offers the XC Deflector handguards with an "optional LED flasher strip." You can buy suspension lowering kits. The usual suspects make hooligan-style exhaust and slip-on systems. For the adventurer touring crowd, Mototoys of Australia makes a stylish bashplate and at least one US farkle supplier is working on a centerstand.

Thank you for this review included with great humorous rants!