What Really Signals the End?

Selling your last and only motorcycle is pretty traumatic. From experience, I can say that it doesn’t feel final. You can always buy another motorcycle. And I could, even if nothing I ever own will never be as tricked-out and personalized as my last two bikes. I owned my 2004 V-Strom 650 and 2008 Yamaha WR250X longer than any other motorcycles in my life. I put more miles on a few other bikes, but those two were as close to being “friends” as inanimate objects can be for me; even more so than my guitars or my favorite microphones. Still, if I found myself recovering from this MG thing and felt confident in my ability to go places and return reasonably safely and reliability, I could find a satisfactory motorcycle, saddle up, and ride off into the sunset. It could happen, but it likely won’t. 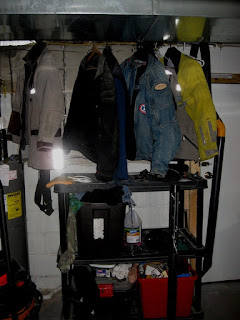 If you’ve followed the train of my thoughts over the years, you know I’m not fond of being owned by stuff. I own a lot of motorcycle stuff, not even close to the least are my two Aerostich Darien suits. Sandwiched between the two Dariens is a non-descript black armored nylon jacket that my wife liked a lot and a Cortech DSX jacket with the now-extinct Minnesota Motorcycle Monthly logo embroidered on the back. I’ve had the grey Darien suit and the Cortech jacket since 2006, the black nylon jacket for at least 30 years, and the HiViz Darien AD1 prototype and off-the-shelf Darien AD1 pants since 2011. I have put more than 100,000 miles on the pair of Dariens, crashed in sharp gravel and survived in the grey suit, had my lack of attention to traffic rescued by the HiViz suit (more than once), and had hundreds of wonderful conversations started in coffee shops and motorcycle events by the embroidery on the Cortech jacket. (Don’t minimize that last one. I am, by nature, a loner and an introverted  wallflower. Possessing a conversation starter is no small thing for me.)

Behind those jackets are the last of 3 full coverage helmets in their storage bags. That small group is left over from a pile of on and off-road helmets I gave away when we left Little Canada in 2015. On the bottom of that shelf is a large plastic storage box that houses spare gloves, cold weather gear, storage bags, tank bags, camping gear, and stwo sets of MC boots: my Gaerne Goretex road boots, and a pair of barely-used Icon Patrol Boots. 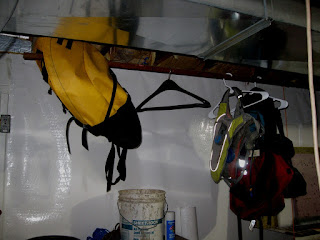 On the other pole, is the Giant Loop saddle bags for the WR, a couple of Camelback water storage packs, an Aerostich courier bag, and a couple other shoulder bags. In the garage is a toolbox full of special motorcycle tools, an Aerostich wheel balancer, a bead breaker, and a box full of farkles, parts, and stuff I never got around to putting on my bikes before I sold them.

This kind of gear will be hard to get rid of because, as I always told my motorcycle safety students, “Buy the best gear you can afford and buy a motorcycle with whatever money is left.” I did that. So, if I sell or give away my gear, going back to motorcycling will be at least a $2,000 entry fee; before I even look for a motorcycle. At my age, fixed income, and overall motivation level, that resembles an insurmountable obstacle.

Back in the 70s, my riding gear was pretty basic: a 3/4 helmet, lineman’s boots, very lightly armored coveralls, Justin roper gloves, and a set of hockey shoulder pads I wore under my nylon jersey and canvas jacket (in cool weather). In the mid-70s, I blew it out and bought a pair of $100 Malcom Smith ISDT boots and within a month, I’d high-sided and crashed practicing for the weekend motocross and, when the bike landed on my heel as I slid face-first toward a pile of busted-up concrete, I ended up with all of the toes on my left foot broken and had to have that boot cut off. I did not spend big money on gear again until I moved to California in 1983 and, thanks to a wet, cold spring I mail-ordered a brand new Aerostich Roadcrafter and ventured into a life in real motorcycle gear; mostly. I admit, during those early years I occasionally went for comfort and just a simple leather jacket and jeans instead of the ‘Stich, but I have been very lucky for most of my life. By the time I left Colorado in 1995, I was a committed AGAT guy and there have been more than a few times when that habit saved my skin, skull, bones, and life.

I have discovered a different kind of emotional attachment to the riding gear than I had for my actual motorcycles. Obviously, I was closer to the gear, pun intended. I never slept on the bike, but there were more than a few sub-freezing nights that I slept in my Darien suits and a few where the Darien backpad and my gloves provided a picnic table sleeping mattress. Through my gear, I got to meet and become friends with Andy Goldfine, Aerostich’s owner and chief designer, and the crew of that great American company. Over the years, I’ve spent at least $3,000 with Aerostich, attended 3 of their Very Boring Rallies, and used RiderWearHouse as an excuse for an afternoon or weekend ride to Duluth too many times to remember. I bought the Gaerne Goretex boots from Ryan Young, in person, at one of the US Trials Championship rounds at Spirt Mountain in Duluth. At least three of the coolest camping trips I ever enjoyed was done on my Yamaha WR250X with the gear stored in my Giant Loop Coyote Saddlebag. I took my grandson for a 3,300 mile motorcycle trip to, through, and back through the Rocky Mountains—and home again—wearing my Darien. I wore that same suit to Alaska and back, for 13,000 miles in 26 days, in 2007. Again, in 2009 I wore that gray Darien across Canada from Sault Ste. Marie to Quebec City to Halifax where I picked up my wife wearing that black nylon jacket, her luggage, and we slogged 100 miles through the worst rainstorm I’ve ever experienced.

Damn, I have some attachments to this stuff, but someone else will get use out of it and my kids won’t have the slightest idea how to find it a home. I’m gonna have to do it.

Email ThisBlogThis!Share to TwitterShare to FacebookShare to Pinterest
Labels: aerostich, agat, all the gear all the time, boots, darien, fast lane biker magazine, geezer with a grudge, icon 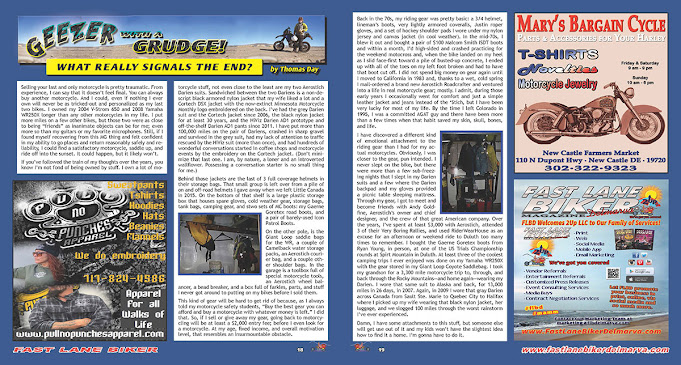