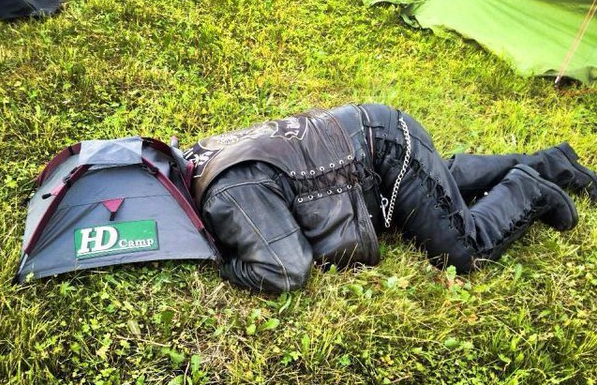 Impress your friend or your imaginary girl friend.

In It for Ourselves

I dropped off my grandson at school on a Thursday fall morning and headed back home, in my trusty, rusting Escort station wagon via I35E. About half-way home, I saw a fast-approaching orange hippomobile in my rear view mirror. The rider wasn't a small guy, either. Gear-wise, the rider was almost as naked as the day he was born; helmet-less and bald, glove-less, half-covered by a two-man tent-sized wind-whipped tee-shirt, loose butt-crack illuminating gangsta jeans, and low-top tennis shoes without socks. The rider was a one-man advertisement for the MSF's Basic Rider Course. Using his considerable weight to weave his 1,000 pound vehicle and flying along at 20mph over the posted speed in moderately heavy traffic, there was no way to avoid imagining how this dude's motorcycling career was going to end. His motorcycle motto was clearly, "Whoever you are, I have always depended on the kindness of strangers." His bike had a lot in common with streetcars, too.

There were three lessons to be learned while being passed by this experiment in high velocity meat distribution: 1) the physics of sound and 2) the errors in common assumptions and 3) far too many motorcyclists are among the most self-centered people on earth.

Obviously, the hippomobile was exhaust silencer-free. In fact, the exhaust noise was so obnoxious that I could hear him when he was nearly out of sight. However, that same deafening blubber was non-existent until the bike was close to parallel with my cage. My windows were rolled up, the radio was on but not loud, and I saw the doofus at least 1/4 mile before I heard him. I listen for a living and I was paying particular attention to this goofball because he looked like a crash-waiting-to-happen from the moment I saw him. As he dodged between the cars around him, clinging desperately to the bars, heaving his belly from side-to-side pretending to be a real motorcyclist, he was violating the peace and quiet of thousands of fellow highway users and every neighborhood within a 1/2 mile of the freeway. However, all that noise was totally useless as a heads-up for anyone he was about to pass. As a life-saving device, his loud pipes only advertised his exit, not his approach.

I was at a friend's going-away party a couple of days earlier and when I was introduced as the author of this column, my new acquaintance said, "You probably hate superbikes, right?" After we talked for a while, he admitted to often "testing" his GSX-R 1100 on Dallas freeways at near top speed and to high speed lane-splitting in a state (like most) where any sort of lane-splitting is illegal. I suggested that a bike like his had no particular purpose in a 60mph world and that he might have more fun on a 250 or 500cc motorcycle on his daily commute. I suggested that, if he wanted to encourage lane-splitting in Texas, he might want to consider less ill-mannered tactics that the ones he'd been using.

He answered by telling me that it didn't matter. His bike had been dead in the garage for engine problems (one too many poorly engineered "upgrades" and the motor had fried). He said he was probably going to give up motorcycling when his first kid was born in a few months. With that change in the subject, I mentioned that my biggest complaint with his "superbike" and most of the hippobikes I bitch about is that they are useless toys, ridden aggressively and offensively until the owners either get hurt or quit riding before they get hurt. This leaves real motorcyclists with a bad reputation and a hostile voting majority looking to limit our access and rights. I don't hate the bikes, but I'm not fond of their stereotypical owners.

I'm not too impressed with people whose riding skills and common sense is so limited that they have to give up motorcycling because of a mild change in responsibilities, either. If you suck too much to ride and parent, I doubt that you were ever good enough to be licensed to ride on public roads. I'd suspect your capacity as a parent, too.

Where I live, I have the pleasure of hearing all sorts of un-silenced motorcycles blasting a boring, straight section of eight-lane freeway. All of those folks impress me with how lame and clueless they are. There is a common assumption among hippobikers that motorcycling's bad reputation mainly comes from crotch-rocketeers blasting through traffic and terrorizing cagers. The fact is that tactic is pretty common among all of the folks who don't care how many people they irritate; superbikers, hippobikers, and douchebags in clubcab pickups and wannabe sports cars. I'm beginning to suspect that if one set of manners is deficient, that deficiency may apply to that person's conduct in general.

South Park did a pretty decent job of describing what's actually being said after one of you noisemakers blasts past. (This is not a rare opinion. A friend, whose son is gay, seriously considered waving a "Fags go home" sign at the noisemakers who polluted her neighborhood at a recent rub-rub-rub rally in Hudson.) Loud pipes don't save lives, but they do something. Juvenile driving tactics don't save time, demonstrate your motorcycling skill, or impress the cage-driving peasants. Anti-social behavior just does one thing: it pisses people off. People who vote, write their government, complain to their local police, and write new laws limiting motorcycle access to public areas.

For most of my life, I've heard guys brag about how much attention they get on their loud, expensive toys. The only attention you're getting is negative. Nobody thinks you are cool, but a large number of people want you banned from public roads.