I’m reading a book by a Frenchman, American Vertigo by Bernard-Henri Lévy, that attempts to follow the path of Alexis d Tocqueville across this country. More accurately, he tries to cover all of Tocqueville’s Democracy in America bases, not necessarily in the order that he touched those places but in the spirit of that journey. One of Lévy’s continual features of amazement is our fixation on our own history. Not only do we spend a lot of time formally and institutionally collecting pieces of history and storing them in expensive buildings, we, individually, collect bits of history and display it as if it had some deep meaning. As individuals, we seem to think our personal history has interest to other people, as if we are all worthy of published and well-read autobiographies. I suspect he is implying that we are a bit self-absorbed.

A few days ago, on my way to a beginner’s MSF class, I passed a motorcycle shop that had some sort of convention going in the parking lot. There were loads of weird looking, and totally, ordinary bikes in the lot and a pretty decent sized crowd wandering around the bikes. So, I had to go back and check it out. Turns out it was the “6th Annual Vintage Japanese Motorcycle Show” and it was more than entertaining. All of the self-historical aspects of American character that Lévy described were on full display in this parking lot.

For me, the most entertaining part of the show was the spectacle of “collected” cheap bikes that were practically throwaways when they were in their prime. Most of these bikes were still in their prime, too. Many of these motorcycles cost a fraction of a month’s income, back when a month’s income was today’s pocket change. Kids would save up their lawn mowing money to buy these little Japanese motorscooters. There was a Yamaha DT1 with less than 100 miles on the odometer. A Honda SL350 with 256 miles of road experience. In fact, most of the bikes were barely broken-in. While most were attempts to recreate a brand new 1970’s replica, some of the bikes demonstrated the “personality” of their owners in either creative or psychotic ways. At least one, not on display but for sale just off to the side of the show, had as split a personality as any weirdo ever depicted on CSI or Homicide. I met the owner, he seemed relatively normal, but his bike made me more than a little wary.

Here’s a quick look at some of the better moments in the 6th Annual Vintage Japanese Motorcycle Show:

I’m trying to establish this blog site as a place to go for motorcycle stuff. If you have comments you’d like to make regarding today’s subject, I’d appreciate it if you’d make them on the blog instead of emailing them to me. I’ll receive whatever you have to say the same way (through my regular email), regardless of how you send your comments. The more hits and comments I have on this blogsite, the more likely it is to get flagged by Google and that means even more hits. And so on. Feel free to pass this on, write bad things about my posture and grooming on the blog site, or add your own take on the state of American motorcycling. Thanks.
Posted by T.W. Day at Monday, May 26, 2008 No comments: 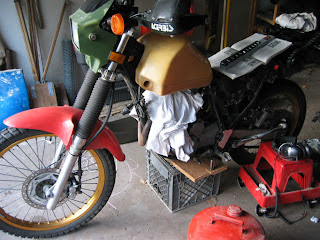 After putting about 3,000 miles on my 2000 Kawasaki Super Sherpa, I decided to do more than just change the oil. I've had an oversized plastic tank since last winter, waiting for my garage to warm up, for the Sherpa. The bike's 1.7gal tank is too small for anything resembling a serious trip. Even with 90mpg, I'm still stopping for gas too often. The valves needed checking. In fact, after pulling the top, I found they were all tight. The fork fluid needs changing. The swingarm needs cleaning and lubing. It needs a new chain. The list goes on for a while. 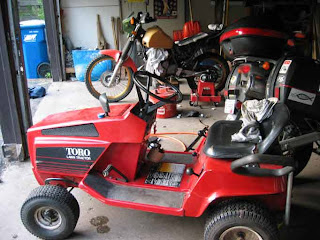 Then my riding mower broke, right after chainging the oil and doing a spring cleaning and lube. The magnetic clutch that engages the blade ripped out its wiring. Now, two pieces of equipment are disassembled in front of my garage and my spring projects are getting out of hand.
Posted by T.W. Day at Friday, May 23, 2008 2 comments:

I don't like to jump on the "Minnesota sucks" bandwagon, because I think driving skills are declining all over the country, but Minnesota is far too accommodating to particularly heinous driving handicaps. Eyesight, for example.

In 40 years of driving, a half-dozen states, and a dozen licensing tests, Minnesota is the only place in the bunch that thinks I see well enough to drive without corrective lenses. Thirty years ago, Texas suggested that I have my left eye removed, if I wanted to drive without glasses, since that eye is practically useless at any distance. Just add an extra mirror to the car, poke out the eye, and they'd have taken off the restriction. I chickened out and went for the glasses. Minnesota is far more accommodating. I've passed this state's vision test twice in the last six years. I failed that same test in Kansas, Texas, Nebraska, California, Colorado, and Indiana. Inspires confidence in our system, doesn't it?
Posted by T.W. Day at Friday, May 23, 2008 No comments:

Good Will Toward All Bikers

A while back, a friend sent this to me and it seemed appropriate today, after an "interesting" confrontation with an H-D owner at a restaurant.

The following quote is from the December, 1920 edition of the H-D Enthusiast Magazine.

"It would be a fine thing for the world if some of this goodwill could be bottled up at Christmas time and dealt out regularly wherever it was needed during the rest of the year. For instance, I'm sure the motorcycle world could stand some of it; for, even though we boast of our "good fellowship" spirit, there still seems to be a tendency among a good many motorcyclist to slight the fellow riding another kind of machine. Motorcyclist are all bound together by a brotherhood tie through their love of the sport, and what difference does it make what make of machine he rides as long as he belongs to the clan?" -- Walter Davidson

Since I first saw a Transalp, in 1987, this bike was high on my list of all time favorites. The Transalp didn't last long in the US, but it's alive and well in the rest of the world. More evidence that we're too dumb to reproduce in the US. The photo on the right is the 2008 model. This, of course, is zillions of times cooler than the coolest bike imported into the US.
The XL600V was a 450 pound, V-twin, 4-stroke, with a semi-Paris-to-Dakar styling that was ahead of its time. It wasn't fast, it didn't have a monster suspension, it wasn't flashy. It was just a solid, reliable, easy to ride bike that could carry you across the country, deserts, mountains, and lousy roads without worry. Every once in a while, a used Transalp appears on the want ads and it always vanishes faster than free money.
Posted by T.W. Day at Friday, May 02, 2008 No comments: