The Star Trib ran an article, sort of parallel to Joe Soucheray's pitiful "goodbye motorcycling" plaintive cry of the wimpy conservative, Rash of Motorcycle Deaths Worries Minnesota Riders, Officials (gotta love the lack of editorial literacy in the Trib's headlines). The gist is "Total fatalities, so far, are up 60 percent over the Department of Public Safety’s tally at this time last year. (The 2012 number later grew once more reports were compiled.)" More to their point, "Since January, more than half of those killed in motorcycle crashes statewide were over the age of 45." Why that surprises anyone is beyond my comprehension.

The one thing I liked about this article was the early sum-up of the season's most typical crashes, "One man, with his wife on board, lost control of his motorcycle on July 4th, killing them both. Another veered off the road on a sharp curve and struck a road sign, dying. A Coon Rapids couple was killed when they crossed the centerline and collided with a pickup." Again, this proves that my intense dislike for the "Start Seeing Motorcycles' campaign is justified. Until we are a small percentage of what is killing motorcyclists, motorcyclists need to quit pointing at other motorists and start learning how to ride or, like Joe, get the hell off of the road.

This is mystifying, "Meanwhile, fewer riders are getting trained. Despite a record number of licensed riders, sign-ups for state safety courses have fallen from their peak in 2008. This season, the Minnesota Motorcycle Safety Center canceled some classes because of low registration." About 1/4 of my teaching season has been cancelled due to low turnout. It's not unusual for August classes to cancel, but early July? 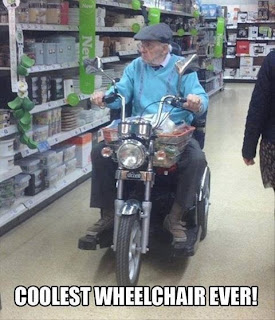 A newbie rider, Harley-shopping guy, Roger Holmes, 59, said it all with his Trib article quote, “It makes you feel good. It makes you feel younger.” Holy crap. One more sucker buying into the marketing bullshit. Dude, you need to have someone take a picture of you and your wife on your hippobike. Put it on your mirror and stare at it every day until you wise up and realize that you not only don't look younger, you look downright silly wallowing around the road on that porker. Exercise will make you feel younger. Eating smart, giving up smoking, drinking less (way less, for you cruiser characters), and reducing the stress in your lives by avoiding stupid impulse buying and idiotic debt will all make you feel younger (and look younger than your dumber Boomer friends).

So-called "motorcycle advocacy groups" are doing everything they can to keep motorcycle deaths high and to kill public roadway access for future motorcyclists in their usual way. This article keeps that trend in place with all sorts of stupid statements. NHTSA has been trying to force some consciousness into state laws by continually chanting the FACT that "helmets cut the risk of a motorcycle fatality by 37 percent. " The let's-kill-motorcycling groups, waste time and energy on fighting helmet laws with all sorts of inconsistent arguments. In this article, I was incredibly disappointed to hear Rider Academy owner/coach, Jed Duncan, say that he opposes helmet laws with the tired and lame argument, “Everybody should be able to choose. At the same time, I wear a helmet every single time I’m on a motorcycle.” If drivers can't "choose" to drive without seatbelts while protected by well-designed vehicles and front/side airbags, what makes motorcyclists special? If you have an answer for that, don't waste it on me. Keep chanting it to your "loud pipes saves anti-social assholes" buddies.

The author of the Trib article actually watched a BRC. One of her comments caught my least favorite part of our classroom song-and-dance, when she described how the MSF program has students watching "short videos of attractive people checking their bikes before a ride." Talk about hyping the motorcycle marketing bullshit about feeling "young" on a bike. About 3 of the people in the entire video series look like our typical calls, but even the least-fit-to-ride old lady imagines herself looking like the Angela-clone on her Harley. This is clearly the influence on the MSF from the organization's sponsors, the manufacturers. If a real safety organization had anything to do with motorcycle training, there would be a section on the aftereffects of crashing. Our version of the old "Highway of Death" programs the pre-political correctness drivers' training programs always ran.

Nothing about this trend is good for motorcycling.
Posted by T.W. Day at Saturday, July 27, 2013