Harley is doing some desperate things to attract under-70 buyers (Who cares if they are riders, too?), but there is a ton of used Harleys out there to compete with. Call it a generational shift, if that makes you feel better, but it’s more than that. For starters, the recovery from every recession in my lifetime has been weaker than the previous crash and 2007 was a huge economic hit for almost everyone. Motorcycles, in the USA, are almost purely recreational vehicles with little practical applicaton.

What’s left of the US industry is targeting women, particularly stupid women, with their “lifestyle imaging” tactics. (It worked for Trump, but we’ll see for how long.) How well it will work for Harley and Polaris remains to be seen, also. It’s not like there is some kind of surge in women riders, taking over from the bucket-list men from a decade 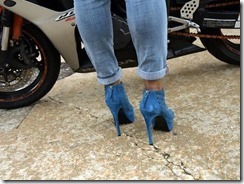 back. Sadly, many of the women I’ve taught in the MSF program are trying to regain their bar-hopping glory days when they could jump on the back of any Harley and get a “ride home” without much effort. The miles and years have taken their toll and, now, they’re forced to buy their own bike for that ride. I have to wonder if they are hoping a mechanic wants a ride home. Outside of electric bikes, motorcycles are far from low-maintenance transportation. I suspect that most new women riders will sour on the whole experience once their bit of garage candy needs tires, belts or chains, or even an oil change not to mention the high price of all that lost skin the first time they dump a bike at highway speeds. That whole “Sex in the City” thing takes a big hit when you grind off a chunk of your face, ass, or whoknowswhat.

The high fuel costs of the early 2000’s aren’t going to save motorcycling, either. Not only do many cars get better fuel economy than motorcycles, but the cost of EVs and used EVs is dropping fast. Nobody in their right mind would buy a $30,000 motorcycle claiming they are doing it for economy or the environment. The industry is going to have to get 1960's creative, if survival is in the cards. It’s not like motorcycles are going away any time soon, but they sure as hell could end up being as marginalized as horses and horse-drawn carriages. It won’t happen soon, but it might be sooner than you think. Cultural evolution happens inversely porportional with diminishing resources. The rate of human knowedge doubling is now once every 12 months and soon to be much faster. That may not be quick enough to save us from being the cause of the 6th extinction, but it will certainly change the way EVERYTHING works in a big hurry. Motorcycles included.
Posted by T.W. Day at Saturday, April 21, 2018 4 comments: 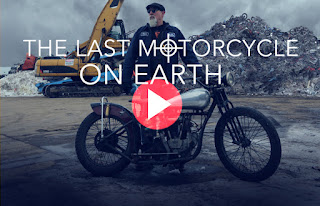 An email asking for support for this ridiculous "cause" made the rounds yesterday. The first time this silly panhandling link hit my email, I replied, "Funny, pretty much the whole movie appears to be about old guys riding older motorcycles. This e-panhandle is making the rounds. "Nobody thought it would happen this quickly," (other than me, but I'm used to being nobody). I've been predicting the end of motorcycles on public roads for two decades. Autonomous cars will accelerate the trend, but motorcycling's general hooliganism and the non-stop lousy safety states are the cause. It doesn't make much of a point that the lead character's motorcycle is barely a noisemaker. Bikers really resist the idea that South Park's "F-Word" is the opinion of motorcyclists by a whole lot of the public, but they're usually wrong and they're wrong again. I'm pretty sure the Constitution doesn't protect anyone's freedom to be a noisy, polluting asshole. I don't know why these old farts are worried, they'll be dead or in wheelchairs before it happens. I wonder if the horse and buggy characters whined this much when their toys were muscled off of the public roads?

"One thing is true. The next couple of generations are not going to be hoarders/collectors of anything substantial. All of the hoards are losing value like crazy; from motorcycles to muscle cars to electric and vintage acoustic guitars to art."


The third, fourth, fifth, and so on times I just hit "delete."

The dystopic future "The Last Motorcycle on Earth" wants to fix is described as, "Gasoline is $20 per gallon. Self-driving cars are everywhere. And motorcycles are outlawed.

"This is the plot of our new dramatic TV series now in production and fundraising on IndieGogo. Starring bike builder and vintage motorcycle collector, Neil 'Morto' Olson and directed by Eric W. Ristau (of The Best Bar in America and Sit Stay Ride) the series asks the questions: 'What happens to motorcycles and vintage automobiles in a world dominated by self-driving cars?' and 'What happens to our motorcycles when petroleum is outlawed, as planned in Britain, Norway, and others?' We're currently raising funds to finish the series through an IndieGogo campaign. Take a look at the trailer and let us know what you think. Thanks for supporting independent motorcycle films!"

Your mileage will probably vary, but I'd just as soon see this project get aborted ASAP.
Posted by T.W. Day at Saturday, April 07, 2018 No comments: