Watch this trailer and get ready for the next "Faster." The movie is TT3D: Closer to the Edge by Guy Martin and like all great motorcycling things, it isn't coming to US theaters any time soon. We're too old, too slow, too timid/conservative, and too lame to even get movies about great motorcycle events, let alone an actual event. Yeah, I'm pissed off. Deal with it. We don't even get the DVD in US format.

This month, I probably crossed a line. We had some real and some fake news reports (it's for the April issue, after all) and one or two didn't get picked up by my editor. However, I remain completely tasteless and until Google starts editing blogs, whatever Minnesota Motorcycle Monthly didn't want will end up here:

Indians Take Indian
Two diverse groups combined their resources to buy the Indian Motorcycle Brand. After tiring of waiting for the current owner of the fabled motorcycle company name to produce something that resembles a ride-able motorcycle, the Cherokee and Comanche Nations saddled up and raided the idle North Carolina facilities, catching the company's management in what one observer called "a mindless, pointless, endless executive planning meeting" and taking control of the facilities in a bloodless coup.

After the events at the Indian plant, Harley Davidson management is on the lookout for anyone wearing bowling shoes as there were rumors that AMF and Brunswick were looking at a copycat attack on what is left of the Harley Davidson Milwaukee facilities. Ex-Buell employees have hinted that they would be willing to join with the bowlers in the takeover.

Zero Helicopters?
Neal Saiki, the founder of Zero Motorcycles has left his own company to compete in the Igor I. Sikorski Human Powered Helicopter Competition. The former Cal Poly, San Louis Obispo aeronautical engineering student, founded Zero Motorcycles Inc. in a Scotts Valley, CA garage in 2006. The company now has 60 employees and a broad line of electric motorcycles. Saiki said, “Founding Zero was exciting, fun and a lot of hard work.  At this point, I think it is well established. I’m extremely proud of the team we’ve assembled to carry Zero into the future. I can now move on to pursuing the dream of building a human powered flying machine."

For Your Dirt Biking Pleasure
Finding a dirt bike is usually hit or miss, but BikeFinds.com makes the search a little easier, regardless of where you live. With search categories for "Mini, Motocross, Trail, Enduro, and Dual Sport," the website allows you to narrow your search to a region, state, or city.

More Motorcycle Airbag Technology
A French firm, the Bering Company, has released a jacket/air-bag intended to moderate motorcyclist injuries. This helium-inflated riding jacket puffs up like an oversized life jacket to minimize the torso's exposure to the forces of velocity and impact. As described in the company's press release, there is a "crash module, attached to the fork of the bike" that uses accelerometers to detect sudden deceleration. If a crash is detected, a microcomputer sends a signal to the jacket to release 21 liters of helium and inflate the jacket.

The New Mexico House of Representatives passed the "Scooter Law Proposal, HB 11" by a 60-0 vote. The bill defines "motor scooters" as bikes with automatic transmissions, motors between 50cc and 150cc, and that are capable of exceeding 30mph. Under-50cc and under-30mph two-wheelers remain classified as mopeds. Scooters under 3.73 kilowatts are also "mopeds." Two-wheeled vehicles powered by 3.73 and 8.95 kilowatt electric motors are classified as "motor scooters." Everything above 150cc or 8.95kW are "motorcycles." The key term of this legislation state allows any licensed driver over age 18 to legally operate a motor scooter with no additional testing or endorsement required.
Posted by T.W. Day at Sunday, March 27, 2011 No comments:

Email ThisBlogThis!Share to TwitterShare to FacebookShare to Pinterest
Labels: all the news that didn't fit, minnesota motorcycle monthly

Panic in the Northlands

A few weeks back, when I was about to collapse with the flu that's floating around the Twin Cities, I went through a flurry of activity getting ready to drive up north to pick up my new WR250X and ride it home before the temperature dropped and the snow hit. Turned out, the guy didn't have the bike ready to sell and he ended up delivering it to me a week and a half later.

During that disease-demented activity flurry I managed to get about half of the gear I'd need to ride the bike in the car. Left the helmet sitting on my shop roller bench. Left one of my gloves on the kitchen table. And managed to load up my Aerostich suit without noticing the pants were missing. I was obviously on the road to a nasty physical crash and a day later I was as sick as I have been in years.

After a week of misery and my first sick day in 9 years, I was almost ready to give the WR a test ride, but I couldn't find my Darien pants. We tore up every storage space, pulled apart the back end of my wife's station wagon, and looked and re-looked in every one of our nine closets. No pants. So, I decided to make a trip to Bob's Cycle to buy something cheap (First Gear, Tourmaster, Icon, Alpinestars, Joe Rocket, or whatever) to get me by until I could convince myself to put out another $300 on another pair of Aerostich pants.

I couldn't do it. The zippers, snaps, material, and design of everything I tried on was so inferior to the Aerostich gear I'd grown used to that I couldn't even convince myself to blow $100 on a temporary pair of pants. I convinced my wife that a winter weekend vacation in . . .  Duluth would be a cool thing to do and off we went to the frozen north for a couple of days in what usually is the coldest month of the year.

I'm not usually a quality-over-quantity kind of guy. If I were hungry, I'd rather have two In-N-Out Burger Double Doubles than a Morton's Porterhouse steak. I buy my clothes, mostly, second hand. I buy my cars and motorcycles, always, second hand. I'd buy used food if I could digest it. But four years ago, I got tossed off of my V-Strom on the Dempster Highway at 50mph into 8" of freshly ground arrowhead-sized rock and slid for a good hundred feet without doing anything more than scratching up the reflective tape on the back of my jacket. It could happen again and, if it does, I want to wearing gear that I know works. No cheap lightweight zippers, no women's purse sized snaps, no parachute nylon, but real heavy duty Cordura held together with oversized zippers and snaps and designed, built, and inspected by people I know and trust.

So, $300 later, I have a 2nd set of Aerostich pants and, yes, we found the first pair in my wife's sewing pile. She'd hauled it down to the basement in November, promising to get the suspenders repaired and back on the hangar "real soon." I fixed them myself and they will stay with the rest of the suit from here out.
Posted by T.W. Day at Saturday, March 26, 2011 No comments:

Email ThisBlogThis!Share to TwitterShare to FacebookShare to Pinterest
Labels: aerostich

When Honda Did Marketing

What could this man of god do with a supermoto?

This is pretty amazing:

And this is a little more professionally recorded:

Email ThisBlogThis!Share to TwitterShare to FacebookShare to Pinterest
Labels: bicycles

Another Great Reason to Ride

Now this is just too hip; the MN state MSF program's bikes for 2011. 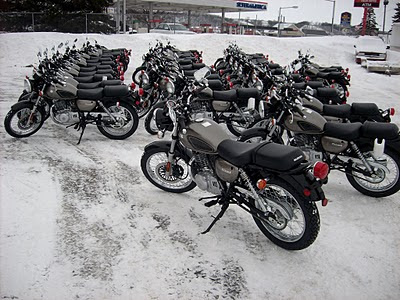