In Pursuit of Quality

The most recent owner/manufacturer of the Norton label claimed that he's only going to be capable of making 2000-4000 bikes a year because "Nortons are essentially going to be handmade . . . you simply can't maintain that level of quality and control with large-scale production."

Funny. Nortons have never been particularly famous for "quality," unless oil puddles, unreliability, and no competitive advantage in power, handling, or any other performance category has become a quality value. The definition of quality this corporate goof is using is one that is mostly centered around cosmetics and no-expense-spared handiwork. That's a definition that only the richest folks can appreciate.
An old manufacturing maxim directs the fruitcakes in marketing and the delusional loonies in sales in the reality, "Quality, price, or delivery. Pick two." Modern American and Brit motorcycle manufacturing blew off the option making that decision and appears to be happy with going for the appearance of quality without caring a lot about price or delivery. That appears to be the tact Norton's new owner is going to take with the long-abused marquee. That kind of business model only works when a sufficient number of customers are dumb enough to cough up buckets of money for a mediocre product. It's probably a pretty good short-term tactic, assuming those rich, dumb customers aren't actually going to ride their new toy.

For the rest of us, the modern manufacturing standard of quality will have to do: a quality product meets its customers' expectations. That's it. Japan practically perfected this standard and changed everything in the world of manufacturing in the process. Before the quality revolution of the 1960's and 70's, middle-class customers expected products from Detroit, American electronics manufacturers, and their appliances to have "personality." Personality means defects, glitches, and high maintenance. Most of us have places we want to go, people we want to meet, deadlines and schedules, and bucket lists. We don't have time for vehicles with personality, so we settle for real quality instead of the cosmetic kind.

If you are going to make that choice, your only option is to go for "large-scale production" products because that's where practical quality usually lives. One of the beauties of large-scale production is large-scale consumer feedback. Even in our age of passive consumers, a noticeable percentage of consumers still make the effort to complain when they get ripped off. That percentage might be less than 1%, but 1% of millions is still a pretty large collection of complaints. 1% of "2000-4000' is easily ignored. NTSHA might ignore 10 irritated Norton owners, but even a federal government agency pays attention to 20,000 complaints.

More importantly, the large manufacturer has the motivation and manpower and talent to squeeze failures down into the six-sigma territory. Although quality is largely taken for granted in modern products, the reason for that expectation is that modern products are largely very reliable. The reason that is true is because designers and manufacturing engineers have the resources and the skills to anticipate and resolve product reliability problems. A group of shade-tree mechanics working for a rich kid who is intent on burning up his trust fund won't be so inclined or gifted.

So, I'll just stick with boring, machine-made, engineer-designed production motorcycles and it won't even cross my mind that I would be happier with a boutique one-of-a-kind handmade bike. Besides, I'd have to decide between having a home or owning a rare piece of art and I'm not that interested in two-wheeled art.
Posted by T.W. Day at Wednesday, September 15, 2010 6 comments:

From an HD press release, "As a result of the decline in retail demand for Harley-Davidson sidecars, which accelerated following the introduction of the Harley-Davidson Tri-Glide family of trikes, Harley-Davidson has made the decision to exit the sidecar business." Sidecars are made at the HD Tomahawk, WI facility and 2011 will be the last year the Company will be in that business. HD has produced sidecars since 1914, but as Boomers abandon motorcycles looking for vehicles that are more appropriate for handicapped parking spaces, Harley is trying to accommodate its customer base.

Cutting costs, eliminating unprofitable divisions and products, while the overall sales picture is depressing, Harley's profits are looking up: upwards of $71 million for the 2nd quarter of 2010. Harley-Davidson isn't the only company using this tactic, but they are using it effectively. Harley has warned its employees that if the union doesn't compromise, the company will move production to other locations.

The company is not worried about having to increase production any time in the near future. CEO Keith Wandell said, “The last thing we’re worried about is when are we going to have to add more capacity, because what we’re really doing is reconfiguring our entire operational system for greater flexibility.”

Bajaj Motorcycles has an idea for improving motorcyclists' image with the advertising program for their Avenger DTS-i 180cc cruiser. In posters and video ads, Bajaj is claiming that you can "Feel like God," "feel supreme," "feel immortal," and "f

eel above all" when you ride their 16hp Kawasaki Eliminator-derived cruiser. Royal Enfield's "Everybody Makes Way for the Bullet" ads are every bit as silly. Check it out on YouTube. India is trying to take up where Honda left off in the late 60's. You have to give them credit for trying. Liev Schreiber and John Stewart reminisced about the good old days when Steward rode babe on the back of Schreiber's motorcycle. Now, "because of the kids," Schreiber rides a Vespa because, as everyone knows, two little wheels are way safer than two big wheels. Of course, his press photo shows him posed on the little thing with a shopping bag dangling from the left grip, his face shield flipped up and the helmet unbuckled. "Because of the kids," indeed.

Lazer Helmets has introduced a significant improvement in modern helmet design, called "SuperSkin" or "PHPSTM - Phillips Head Protection System." This helmet liner material is fixed to the surface of the shell, but allows the interior of the helmet to slide during the initial period (15mS) of impact, preventing "rotational impact to the brain." Lazer claims that this design can significantly reduce brain injury due to hemorrhage.

The California state legislature is a step closer to approving Senate Bill 435, which would require bikes built after January 1, 2013 to use only EPA-approved exhaust system components (which has been federal law since 1978). The AMA is fighting this and proposing its "model legislation" version of a system that would require complicated individual field testing by law enforcement.

A US company, Federal-Mogul Corporation, is hyping a new design for an old device: a "coated piston for gasoline engines that combines the properties of low wear and low friction in a single application." Their claim is that the piston coating (made from "solid lubricants, including graphite, molybdenum disulfide (MoS2) and carbon fiber") can reduce fuel consumption by 0.8% and improve CO2 emissions.

All Rights Reserved © 2010 Thomas W. Day
The question is, "Can a motorcyclist visit Duluth and not stop at RiderWearhouse?"
The answer is, "Probably not."
On our 43rd anniversary trip this summer, my wife and I planned a cage trip to Duluth to escape the August heat. There was no motorcycle component to this trip because she isn't a comfortable passenger and that week offered exceptionally uncomfortable weather; afternoon temperatures above 100oF and thunderstorms in the evening. 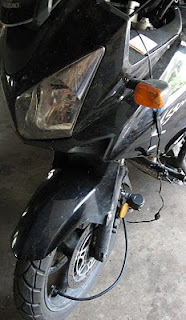 However, I'd received an Aerostich sale email earlier that week advertising a bit off of the tire repair kit and a disappointing experience with my Mini Foot Pump convinced me that yet another piece of modern technology belonged in my emergency bike tools kit.