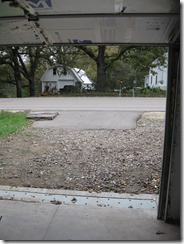 Imagine that you own a near-500-pound motorcycle, that you are old and worn down and out, that the exit from your garage is uphill and covered in large gravel, and that your bike garage is barely 8' wide. You can't practically ride the bike in to the garage and turn it around on the smooth garage floor. You can't back the bike out, up the hill and through the river rock, backwards without pushing the limits of your old legs and bad heart. What would you do? In my case, there is no imagination required. The picture at left is exactly what I see every morning when I roll my bike out of the garage into a fairly high traffic county road. When we first moved to Red Wing, the bikes had to go into this garage and I practically killed myself moving the V-Strom back out in the spring so that I could get on with the garage overhaul. 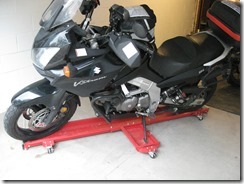 The Bike Dolly from the sidestand side. The V-Strom is almost long enough to force the ramps down, which would prevent the dolly from moving freely.

The solution was a bike dolly, but an early search of the options produced a collection of $250-and-up devices obviously designed for a lot more mass-movement than I needed for my 650 V-Strom. While I was working on the garage, I kept looking until the Harbor Freight "HaulMaster 1250 Lb Capacity Low Profile Motorcycle Dolly" showed up on one of the email sale flyers at $89 plus $7 shipping. I ordered it and promptly received an email telling me my early-May order had been backordered for an expected late August delivery. What the hell? I let the order ride and went back to work on the garage. Over the next couple of months, I stopped in at a couple of Harbor Freight stores and learned that none of the Cities or outlier stores had a bike dolly on the floor as a demo. When one showed up, someone always bought it before the store could get it unboxed. In early July, I discovered my backorder had self-cancelled. So, I called Harbor Freight and asked what I needed to do to get the damn thing back on order? The nice lady resubmitted my order and told me the dolly was on sale that week for $69 delivered. A nice surprise. I gave her my credit card info and less than a week later a large and very heavy box was waiting for me on the back deck when I got home from a Saturday motorcycle class.

The Bike Dolly needed one modification, which this picture sort of demonstrates: the traction pad at the bottom of the ramp "foot."

It should come as no surprise that the dolly comes unassembled. The instructions are reasonably clear and the assembly is insanely simple, so in about fifteen minutes I was rolling the dolly down the driveway toward my new garage floor.  I've used it fairly often for about 6 months now and, mostly, I'm really satisfied with my purchase. 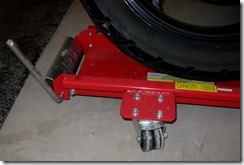 The casters are probably sufficient for my 475 pound V-Strom, but I'd question their ability to wheel the rated 1250 pounds. They are dual-wheel, stamped sheetmetal frame ball-bearing casters, but they're prone to hanging up on small obstacles and I expect one or more of the casters to fail in the first year of use. The galvanized ramps tend to slide, so I put a strip of adhesive-backed hard foam rubber on each to keep them in place when I'm loading the bike. Unloading is no problem. The bike dolly is close to short on my 61 inch wheelbase V-Strom and the ramp would be stuck in the partially-down position if the bike were an three or four inches longer. Something to consider.

Piddling gripes aside, for about $75 delivered, this is one hell of a deal. All of the competition is $100 to $400 more expensive and they all do the same job the same way. If I were giving stars with my reviews, I'd give this tool 4 out of five (the casters are the lost point).

Posted by T.W. Day No comments:

Why Can't We All Just Get Along?

Motorcyclist Online just posted this rant, " Your Bike Sucks! (Or, How NOT To Enjoy Motorcycling)No tolerance for people who dislike the variety of motorcycling." There is some grist to chew on here. Motorcycling is not just a group activity and many motorcyclists are purely on two wheels for functional reasons. Some of us simply think motorcycles are excellent transportation. I can easily see why someone who bought a bike to get from point A to point B without spending a lot of money or taking up a whole traffic lane would be damn tired of all the gauntlets other motorcyclists seem to think we're supposed to put up with. I can see getting tired of reading about motorcycles that are of not interest ("articles" that are barely more than advertisements). All of that in mind, it's not a stretch to get to being “sick of taking s—t from the Harley crowd because we prefer to ride something that is going to bring us back home at the end of the ride" and cancelling a subscription and killing the online feed.
It's no stretch for me to imagine Motorcyclist's editor being an asshole about losing a subscriber and not having the grace or common sense to avoid losing a few more with his response. About a decade ago, I wrote my last article for Motorcyclist and haven't picked up a copy copy since the editor at the time fired off a similar jackass response to someone who was sick of the magazine's insistence that every test bike needed a noisier pipe and some pointless engine fiddling before it was fit to ride.
On the other hand, the fact that motorcyclists are in no way a coherent group is why here in Minnesota there are hundreds of miles of trails paralleling state and county roads open to ATVs and snowmobiles, but closed to motorcycles: licensed or not. We are exactly like Will Rogers' political affiliation, "I belong to no organized political party, I'm a Democrat." We have industry groups fighting against our best interests like the AMA and MIC and rider groups doing even more damage like ABATE, but intelligent, supportive, practical motorcycle rider organizations are non-existent. It's a mystery that I won't live long enough to solve.
Posted by T.W. Day 2 comments: