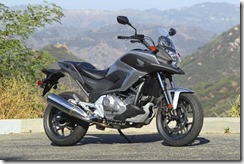 One of the side bonuses of my trip west with Scott Jarrett was a brief opportunity to ride his well-broken-in Honda NC700X. We swapped bikes for a brief period crossing northern Nebraska and that gave me the chance to play with the bike and get a feel for its handling. This isn’t a real review. I didn’t beat Scott’s bike up at all, like I often am accused of doing when MMM gets a test bike. The “test” was on Nebraska/US20 and, if you’ve been there you know it’s pretty straight and level. I didn’t have a chance to mess with cornering much and I really didn’t put the bike to any sort of handling strain. So, this is more of an impression write-up than a test. [I didn’t take any pictures of the bike while we were riding, so all of the images in this write-up are from the WWW.]

First, right from the start the NC700 feels small (especially compared to my 2004 V-Strom). You sort of perch on top of the bike, rather than being seated “in” the bike. In that way, it reminds me of the Buells I’ve ridden. With a 60.6” wheelbase and 474 pounds wet, the NC700X feels a lot lighter and smaller than it is. Small or not, the bike is plenty stable at speed and the handing is predictable. It just takes a little getting used to, if you’re familiar with a different style of rider position. Thanks for the under-seat fuel tank and low-slung in-line twin engine layout, the weight feels really, REALLY low. My V-Strom, in comparison, feels heavy and awkward at low speeds. 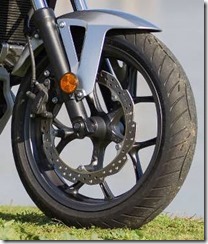 The first thing I always test before I get going is the bike’s brakes. The single front disk, for example, seemed conservatively cheap compared to the dual disks I’m used to. The disk is mounted close to the center of the wheel, which allows for a bit more leverage on the wheel and probably a lot less flex in the wheel during hard braking. It is not a small disk, although the pads are about the same as my V-Strom’s dual disk system. Regardless, you get a suitably aggressive front brake action, in spite of the single disk. Scott and my bike have similar miles and his brakes were easily as solid feeling as my V-Strom’s. I’m on my 3rd set of pads and I suspect Scott is still on his first, for whatever that’s worth. As usual, a strong application of the rear brake provides pretty much non-existent stopping power. Any time I try this “test” I have to wonder how people who rely on the rear brake live through a day.

Lots of early reviews complained about low power and sluggish response from the NC’s motor. I didn’t notice the absence of power, although it doesn’t accelerate like the V-Strom. It’s plenty quick enough for practical travel. Scott had his bike loaded up with luggage and I’m not light, but the bike provided plenty of practical passing power and pulled 6th gear up the grades we travelled without problem. The economy, on the other hand, kicked ass. While I turned in a series of 45-53mpg tank fills, Scott was regularly in the mid-60’s to low 70mpg zone. Obviously, we were travelling at the same speeds, so it was all in the motor making the difference. The NC’s super quiet engine and exhaust noise was a pleasure on the road. The main highway noise was the tires and wind. The transmission is despicably Honda; so good it makes all other motorcycle brands seem inferior. You can fumble through all 6 gears without a lick of skill, barely considering the clutch, and every shift will be flawless. Neither my Yamaha or my Suzuki hold a candle to the Honda’s transmission operation. That has been true for every Honda I’ve ridden or owned (except for one massively abused exception). 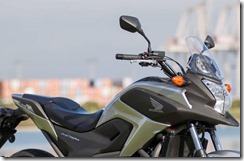 The rider’s vantage-point is, as I mentioned before, not really “in the bike.” There is not real fairing protection and the cute but worthless windshield doesn’t offer much of a break from the wind. Scott had added an extension to the windshield that he thought provided a little more of a helmet noise buffer. All I can say is that I felt a lot more exposed on the NC700 than on my V-Strom with a Madstad bracket and the stock windshield. If you’re going to ride an NC in the rain or cold, bring good gear or you’ll be wet and frozen.

The NC’s 32.7” seat height is respectively low, which is a good thing for shorter riders. The only thing I would have changed, right off the bat, on the NC is the seat. It is, to put it politely, cramped and uncomfortable. The slope tends to stuff your nuts into the tank and the position feels restrictively limited. Sargent, for example, makes a decent looking replacement for their usual bucket-full of cash. Long days in the saddle will be uncomfortable until you fix this shortcoming.

In all, I liked the NC700 as much as expected I might. If I were replacing my V-Strom, the NC700X (with ABS) would be at the top of my list of options.

Interesting experience with the bike. I remember the first bike I rode in, I was on the bike. The second bike was a lot larger and I was more inside the bike. I can see how it can take some getting used to if you are used to riding on larger bikes.

I can't remember back far enough to accurately document my "first" with "on the bike," but a more recent and obvious "on the bike" experience was a test ride I took on Buell back in the beginning of this century (Isn't that a fun thing to be able to say?). The Honda was similar to that, but a few hundred pounds lighter and less tenuous feeling. My V-Strom definitely qualifies as a "larger bike." It's heavier, has a feeling of a higher center-of-gravity, and is more stable/more resistant to turning quickly. Don't forget, the end result was that I liked it better than my V-Strom for a variety of reasons, not the least was the killer fuel economy.

Can you recommend a bike that does have wind/bug-debris protection? I ride on the interstate with a lot of flying little pebbles(our car windshield gas been cracked 4 of 5 times) on the way to country roads with a lot of flying bugs. I live on the outskirts of Houston and mist of the roads are straight and flat. Appreciate it.

Dale,
If you've read me much, you probably know I don't often spend time on large motorcycles, which are what usually have serious windshields. However, if you're looking for a used bike, I'd recommend the Honda PC800 (http://geezerwithagrudge.blogspot.com/2014/07/63-bikes-that-i-love-and-you-apparently.html). Otherwise, there is always the Goldwing. Of course, if you wear a real helmet the bugs and pebbles aren't much of a concern.

So putting wind protection aside, the NC700X and the Honda CBR250R, have Geezer approval? Any others you have had the chace to test drive? Honda CBR300R? Yamaha R3? honda CB500F? Yamaha FZ-07? Thanks.

I have an NC with the DCT. It is a light feeling bike which I really like. I am with enough farkles trying to make this bike kind of a lightweight touring rig. If only I could shave 2-300 pounds off the GW DCT. I haven't achieved my goal with the NC yet but it's fun trying.