Ray Kang, one of the more interesting people I have known out of all of the very interesting people I know from the MN-Sportbike group, loaned me a chain-crimping tool a couple of years ago. While we were putting the finishing touches on my new chain, we got into a discussion about all things motorcycling, political, and recreational. I'd just traveled across the Cities from my place to his and was surprised at the number of riders I saw wearing actual gear on that hot July afternoon. In fact, in my 'stich, boots, and full-face helmet, I felt a little under-dressed compared to the general population. This summer was a leg up on that experience. I'd guess more than three-quarters of the commuters I waved at last summer were AGAT.

Ray said that the advent of designer motorcycle brands is changing the way people who want to look cool dress for riding. Brands like Icon, Olympia, Speed and Strength, Fox, Thor, Rockstar, Scorpion, Shift, Joe Rocket, GMax, SparX, Xpeed, Power Trip, Element, REV'IT, and all of the folks who file out magazine back pages and full page, 4-color ads scattered throughout the major magazines are doing everything they can to convince younger riders that looking cool requires cool looking protective gear. As Ray observed, designer gear may not be the best quality but it is infinitely better than shorts, a wife beater, sandals, a bandana, and a pair of Oakley wrap-arounds.

After 50 years of the retro-Village People, who would have expected "cool" and "protective" and "gear" to all end up in the same sentence? Not me.

Of course, if you look at my long relationship with dirt bike gear, including the requisite layers of dirt and grease, why would you expect me to anticipate or appreciate any kind of stylish movement in clothing? I am proud to say that, every decade or so, I am solidly and comfortably in style. But that is because my closet is stocked with the same safari multi-pocket jeans, teeshirts, denim long-sleeve sports shirts or checked flannel, high top hiking boots or basketball shoes, and polyprop socks, regardless of what the rest of the world is wearing. New or used, I can always find the clothes I want to wear. I only replace clothing when it wears out or my belly grows another couple of inches.

Fortunately for the fashion end of the economy, I'm not normal.

Maybe this is a generational thing. I don't see the behavior of the leather chaps crowd changing. They still believe in magic and a protective angry aura. What I do see is a significant change in what the local sport bike crowd is wearing. Visibility is clearly not cool, black is still the in color. In fact, black-on-black with black highlights is the most common "color" for trendy gear.

Protection is, however, the marketing claim for this gear. Icon's marketing campaign leads off with a graphic proclaiming "Our crashes are vicious street episodes. We aren't talking about some lame gravel trap slide because you can't negotiate turn three. Ours are more like two lanes of oncoming and the broadside of a sedan type encounter." Their Field Armor ad starts off with a stunter wheelie-ing into the distance and the product description is jammed with comfort and "energy dispersion" imagery. Joe Rocket's campaign reads "No skulls, no chains, no pointless fluff" and the slightly scarier "gravity . . . just a theory." Like Icon, almost every piece of gear Joe Rocket advertises is some shade of black. But the gear is also advertised to be armored, ventilated, and waterproof. Power Trip . . . black and trendy. Scorpion calls their gear "Weapons Grade" and challenges the world with "Go ahead, road. Take your best shot." Scorpion actually has some high visibility stuff to go along with their black-and-hip gear. All of the young and trendy brands sport CE® approved armor. We're not talking about cruiser gear that is nothing more than rebranded Members Only bomber jackets and Doc Martens high-top boots. Suddenly, or not, the cool kids are starting to wear actual motorcycle gear. 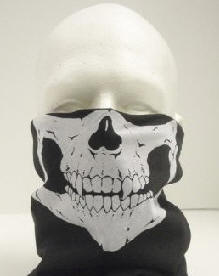 Don't worry, though. Humans are not finally evolving into sentient beings. One of the "cool" kid motorcycle accessories is the bandit face mask. Nothing says "I'm an idiot" like wearing a $3 rag over your face while traveling at 60mph in a 30mph speed zone. No way the cops could mistake that for something sinister. No way the trendy hanky could blow over your eyes and send you crashing into the nearest industrial-sized dumpster.

The more things change, the more they stay the same. Still, motorcyclists wearing motorcycle gear seems like a positive sign. These days, any good thing is a rare and precious event that we should celebrate "like it's 1999." Ray is right. Younger riders are, mostly, using some bits of their brains to pick cool looking, functional motorcycle gear. Who'd have thought that was possible? Not me.

I think part of the reason a lot of the "older-than-me" crowd hasn't moved to wearing gear is that they don't know about it. My father and uncle have both been riding motorcycles for something like 50 years. Neither one of them knew about the new armored mesh jackets until I asked why they were dumb enough to ride in the summer without armored gear. (I might have been a little more polite than that, but not a lot. I do firmly respect their right to be dumb, but I reserve the right to call my family on it.) They both said "Well, it's too hot to wear a leather jacket, so what am I supposed to do?" They had no idea that there was better gear available.

My father bought a mesh jacket within a couple days of that conversation, and my uncle says if he ever gets his bike started again (it's an old Honda, and needs some work) he'll buy one immediately. You're right about companies trying to make gear cool, though... they've run out of things to sell chaps to, so they've got to come up with something to pitch to everyone else.

Andy, that's all a good thing. Any gear is better than riding naked or in your underwear. I've never really understood the leather thing. Ass-less chaps and designer jackets are pretty much the same as nothing.