Day 1: On the Road to the Music Museum

Just what you’d expect from a pair of musicians, we got out late and slow. We left Tuesday “morning,” way after any start time I’ve ever experience on a long trip. The “plan” was to make it to the National Music Museum in Vermillion, South Dakota either on time to check out the museum or find a motel and check out the place the next morning. Yep, I said “Vermillion, South Dakota.” Who knew?

We left Red Wing about 9AM on Tuesday, after putting off our original start day, Monday, due to complications entirely within our control. We’re just lazy and disorganized. I intended to spend Monday going over the V-Strom, since I haven’t really done much with the bike for the last couple of years. As soon as I headed for the garage, Scott decided he wanted to do an oil change and some service on his bike. There is no room for two mechanical projects in my new garage, so the V-Strom got left out of the party. (I’d regret that for the next four days and 2,000 miles.) With the knowledge that I’d be traveling with old oil, mediocre tires, and no serious inspection of anything we headed southwest toward Vermillion, South Dakota where a friend of Scott’s had told him we’d find the National Music Museum. Our initial route was pretty much scrambled by the usual MNDOT mess of detours and half-hearted “maintenance,” so I’d be hard pressed to reproduce our route until we hit Mankato. From there, it’s pretty simple, we took MN 60 to Le Mars, IA and turned west on IA 3 until that joined IA 50 and into Vermillion.

Scott has some fixed habits about riding and taking breaks that were a bit inflexible and that made the trip a good bit longer (time-wise) and odder (fuel stops every 100 miles, regardless of fuel availability). I sucked it up and lived by his rules as best I could. We haven’t had much chance to hang out in the last few years and after our RV plans went to hell, we were both looking forward to long bullshit sessions at meals and after we’d parked the bikes. Most likely, we’d only be riding together for a couple of days before I needed to head back because I was expecting another old friend to show up in Red Wing the following week.

Before we went into the museum, Scott decided to do an impromptu bike inspection and maintenance. He discovered that he’d lost the chain link retaining clip and went into full panic mode. I figured that we would check out the museum, find a motel, and mess with the chain at our leisure, but he wanted a solution “now.” So, while I prowled the museum he spent an hour on the phone chasing down Honda dealers who had either a replacement clip or a whole new chain. He kept asking me if I’d ever had this problem and I kept saying “no.” It didn’t occur to me to consider why that was the case. 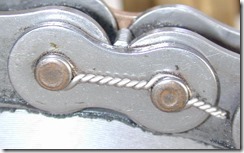 He found a shop in Sioux City that was open till 6PM and, supposedly, had either a clip or a suitable chain and he sort of relaxed for a bit and took in the museum. About 4:30, we’d done the museum and he decided that he wanted to berserk it to Sioux City for the bike shop before they closed. We were about 40 miles from the show and should be able to make it on time. As I followed Scott down the road, I worried about his chain coming apart and the resulting damage. Suddenly, I realized why I’d never had this problem before I bought my chain press and went to riveted links; I always safety wired my master links, rather than using the supplied clips. From my dirt bike racing days, I have always tossed the clips and wired the link. I know some people think this is a temporary fix, but I’ve used it as my primary routine for a lot of years and never had it fail. I haven’t been riding on riveted links long enough to be able to have the same confidence. So, we turned around, found a hardware store and I tied up his chain link (see photo for an example).

Chain problem solved, we headed for Yankton and a place to spend the night. Scott picked a 50’s style motel that turned out to be golden and we found a great place for dinner near the river. In the background, we heard a band (as in orchestra) playing and after dinner we wandered back to hear the Yankton City Orchestra play a variety of tunes from the past and way, way distant past. After a long, but slow (thanks to my screwed up foot), walk around the park we headed back to the motel and I was asleep before my eyes closed.