RiderCoach demographics is a lot like the information we get from the media about American motorcycling. Sitting in the classroom before this year’s PDW(Professional Development Workshop, in MSF confuse-speak) the conversations were about surgeries, complaints about kids expecting their inheritance early, spouses dying or being put away for Alzheimer's, diabetes and the associated paraphernalia, who died, who moved to Arizona, grandkid stories, and the usual stuff you’d expect to hear in an old folks’ home. Of the lot of us, three of thirteen were under fifty. Not much different from the crowds at the Progressive International Motorcycle Show. 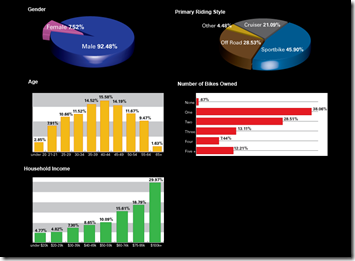 If I were a motorcycle manufacturer counting on the United States as my future market, I’d be worried. I don’t know of any other recreation, other than golf and gambling, that is so overrepresented by senior citizens. If you believe industry statistics-- and I absolutely do not--even internet magazine readers are largely seniors. At left is a chart of MotorcycleUSA.com readers; when 53% of an internet website’s readers are over 40 you’re looking at an odd “sport.” I looked, but I couldn’t find real rider demographics, just lots of motorcycle death statistics. As you might expect, us old guys (and a few old women) are overrepresented in death statistics.

If no one is planning for the future of motorcycling, you’d have to suspect that they either know there isn’t one or they are too stupid or lazy to do the work necessary to create one.