Being Stupid Is Not the Same Thing as Having an Adventure

"An adventure is only an inconvenience, rightly considered." G. K. Chesterton

"Adventures are what you have when you screw up." Virgil Flowers (John Sanford, Shock Wave)

On the way through Montana a couple of years ago, I found myself at a service station surrounded by a dozen Harleys and a slightly larger number of middle-aged folks all duded up in biker outfits. One of the women asked if I was hot in my gear and my usual reply is, "Not as long as I'm moving." It was a hot day, closer to 100oF than 90. The pack was through for the day. The bump in the road where we'd met had an air conditioned bar and a small motel and, by early afternoon, they had had enough of riding for the day. I still had a few hundred miles left to cover before looking for a campsite.

Nosing eastward into the nearly abandoned two-lane, I couldn't help reflect on the fact that there wasn't a stitch of motorcycle gear among that group; no helmets, no armored or weatherproof riding gear, no decent boots or full-fingered gloves. Just patches of Village People leather and yards of road-rash waiting to happen in a place where there won't be any emergency assistance in less than an hour. My wife's comment on this behavior is, "Being stupid is not the same thing as having an adventure."

The line between an adventure and a pointless risk that may be so fine that it is only recognizable from an external perspective. My father was convinced that everything I have done in my life was filled with pointless risk; from leaving my first "secure" job to whatever adventures I have had; and all actions between. Everything is relative and most of my Midwestern relatives would argue that adventures of any sort are excessive risks. I come from a long line of farmers and, supposedly, English sea captains and sailors who drowned at sea. I lean more toward my waterlogged relatives than the salt-of-the-earth crowd. However, I suspect that the sailing bunch didn't just jump into a leaky boat and charge into hurricanes. That would be stupid.

An adventurer heading into uncharted territory takes reasonable precautions based on what can happen. Sun Tzu wrote, “If you know your enemies and know yourself, you will not be imperiled in a hundred battles; if you do not know your enemies but do know yourself, you will win one and lose one; if you do not know your enemies or yourself, you will be imperiled in every single battle.” Riding a motorcycle is a lot like going to battle. The universe is not on your side. The "enemies" are the road, the laws of physics, other highway users, fate and chance, and every varmint with working legs and an inclination to wander on to the highway. No one is looking for you and nothing is looking out for you. It's war out there and you better come prepared.

A life without adventure is good enough for most humans. A few can't deal with a single day that isn't filled with adrenaline-generating risk. I'm somewhere between the two. Someone clever said, "Live passionately, even if it kills you, because something is going to kill you anyway." I'm good with that philosophy, but there is no sense in looking to get killed. 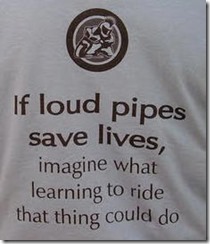 A recent safety promotion used the slogan, "If loud pipes save lives, imagine what learning to ride that thing could do." That's the first step in motorcycling self-awareness. Training and exercising riding skills goes a long way toward learning about the boundaries of control and performance. By "performance," I don't mean 0-100 mph gibberish, I mean braking, turning, knowing your bike's suspension capabilities, traction, and being ready for imperfect surface handling characteristics. Regularly practicing basic and advanced skills is the best way to learn about yourself and your motorcycle.

Knowing your enemies involves understanding momentum, velocity, acceleration (and deceleration), mass, stress, friction, shear and tear and abrasion strength, elasticity, and some basic biology. Once you have a slight grip on those concepts, all of the anti-helmet and anti-AGAT arguments appear as unobservant and half-baked as neoclassical economics. When you know that enemy, you will equip yourself accordingly. Putting on a bandana and a pair of leather chaps and heading into heavy traffic is not an adventure. Ignorance and stupidity are the same character in this situation.

Knowing your enemies means being ready for what the enemy can do. Cagers can do any damn thing you can imagine. Rarely, they are homicidal. Usually, they are incompetent, distracted, and unpredictable. Either way, you have to pay attention to where they are looking, what they are doing, and you have to be constantly mapping out your escape routes. Every foot of the road you travel has to be part of your survival strategy. In my opinion, you are having an adventure when you plan your route and make a backup plan and pull it off as cleanly as possible. If you think a "start seeing motorcycles" sticker and a noisy exhaust is going to get you anywhere, you are just being stupid.

Email ThisBlogThis!Share to TwitterShare to FacebookShare to Pinterest
Labels: geezer with a grudge, letter from america, riders' digest