[When Guido picked this essay, I choked a bit. I have tried to write about my daughter, Genya, and her incredible rescue at least a dozen times. I have the notes and the intention to write a Reader's Digest sort of article, honoring the firemen, EMTs, police, medical staff, and bystanders who saved her life. I can't even read the notes without reliving that trauma and it may never become anything more than a painful reminder of the worst moment in my life. In many ways, I wish Guido had passed on "Parental Responsibility" and moved to something more gonzo and holligan-ish.]

You have to admit that is a pretty arrogant title for a column like mine. Parental responsibility; as if I know something about that subject. When our kids were little, almost 40 years ago, my wife and I were as careless about seatbelts and how our lifestyle affected our kids as any pair of dumbasses ever recorded by history. On a motorcycle and in my kids' lifetime, I have always worn a helmet, gloves, boots, and some kind of jacket when I ride, but I am not an AGAT (all the gear, all the time) kind of guy. I should be. I try to be. But I'm not. In the car, I still neglect the seat belt more often than not. I treat my riding lawnmower like an ATV. I often bicycle without a helmet. Sometimes I don't wear safety glasses when I use power tools. I've even been known to tack weld a spot or two without eye protection. I just squint. I've raced motorcycles, competitively, and for recreation. I used to love crossing Wyoming and Montana in the "safe and reasonable" days when you might get passed by a black-and-white while cruising across the high plains at 100mph. I'm not bragging or even a little bit proud of these things, I'm just setting the stage.

My perspective has always been that, "It's my life and I'm going to live it the way I want to live." I don't expect to, or want to, live to a ripe old senile and incapacitated antiquity. As Hunter Thompson once said, "I'd rather be shot out of a cannon than squeezed out of a tube." Even knowing the end result of the necessary and unpleasant landing after the cannon shot.

In a demonstration of what a dumbass I really am, it has taken me most of my life to realize that my kids have taken cues from my attitude. I'm lucky, probably because I've provided such a fine example of the results of risk taking, that my kids are alive and far more cautious than me. My daughter once told me that she wasn't tempted to ride motorcycles because she saw me limping, on crutches, bandaged, or in a sling for so much of her childhood that motorcycling didn't seem like much fun. Maybe my kids would have been a lot more foolhardy if I'd have had a lick of talent on the racetrack and more luck on the trail.

It took most of 60 years for me to get a wake up call. Like most humans, I'm most affected by my own faults when I see them in someone else.

For example, a pair of really nice people brought their son to a BRC a while back. He came to the class with great gear; an expensive and well-designed perforated armored jacket, a Snell-approved full-face helmet, quality riding boots, and racing gloves. He and his dad had spent a lot of time riding off-road and his skills were pretty good and heading toward excellent. He is a great kid, an excellent student, and left the class a better rider than I was at twice his age. If our kids are a reflection of ourselves, I imagined his parents might be approaching national role models.

To bust that bubble, on the last day of the BRC, his proud parents came to watch in full Hardly-hardcase costumes; bare-headed, sleeveless leather vests, tennis shoes, and torn jeans. And it hit me how strong a message that was for their son. It's, obviously, the same message I often sent to my own kids when I ignored seatbelts, played crazed hillclimber on the lawnmower, or tested the depth of a river by jumping from a 20 cliff into the rapids. Again, don't mistake what I'm saying for pride in my behavior. If anything, this is the ranting of a reformed whore (or a street-walker who would like to have the self-discipline to attempt reform) rather than anything resembling conceit.

I do, however, speak from experience. The worst thing I can imagine is outliving my children. Maybe outliving my grandchildren would top that. Just after her 20th birthday, my youngest daughter was in a terrible crash. She, somehow, ended up on the wrong side of a Colorado two-lane and her Toyota pickup smashed head-on into a Ford F250 pickup at highway speeds. To say "the Ford won" would be the understatement of the century. Her vehicle was unrecognizable and she suffered a half-dozen injuries that could have been fatal. Incredible good fortune and near-perfect execution of her rescue by the Denver Fire Department and 14 hours of surgery at Denver General Hospital saved her life. During the week that she was in a coma and the weeks of her painful and recovery, my heart broke so many times that I thought I'd collapse in a quivering heap for the rest of my miserable life. I don't know any words that can describe that feeling and I'm not going to try to find them. Writing this paragraph has revived a tiny part of those emotions and I've probably ruined an otherwise fine day. Genya recovered and she has gone on to be a better person than her father, in every way. Our story had a happy ending, although we could have done without that plot twist. 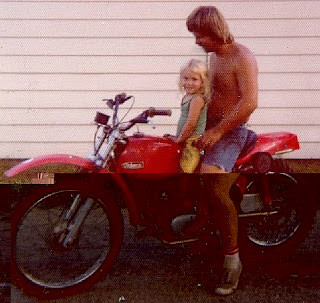 Whenever I see a parent (always a father, in my experience) with a kid on the back of his bike wearing an adult's helmet and no protective gear, or worse, I think about how badly that kid will be injured when Dad screws up. Let's face it, anyone dumb enough to risk their kid's life so thoughtlessly is going to screw up, sooner or later.

The obligation we take on when we become parents is the responsibility of constantly setting an example. Saying "do what I say, not what I do" is a waste of breath. Our children either look at how badly we've failed, and try to do better, or accept our actions as the definition of how life should be lived and emulate us. How would you feel knowing that your example led to your child's terrible injuries or death? Even indirect responsibility is a terrible burden. Believe me.