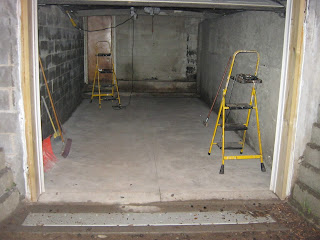 Motorcycling is supposed to be one of those things you only do when you're in the "right" frame of mind. I get the concept, but I'm not (apparently) a big believer. I jump on the bike for all sorts of reasons; including working out stuff that gets stuck in my head and won't come loose. Today, for example. I worked almost all day on sealing up this damn garage roof. That means I was scraping and scrubbing and vacuuming up crap from the small space under our front entry way (which is the back 4' of this garage's ceiling) so that I could stuff hydraulic concrete into the space to close up the hundreds of cracks in that portion of the garage roof. My arms are scraped and bleeding. My hands barely work at all. My back is humped and hunched and feels like I should have the whole damn thing fused into a post. My damn right foot is still screwed up and I have two days to get this job done before it rains again. I'm running out of summer and I still have way too many projects yet to start and finish.

So, that's when my wife decides to dredge up old crap that should be left lying in the ditch where it last was seen. A domestic dispute ensues. You don't stay married for 50 years without building up some resentment and pressure. The beauty of not being the "head of household" is that you always have someone to blame for your disappointments. The disadvantage of being that guy is that blame is a limitless resource. Days like this remind me that the best thing about life is that it does not last forever. I decided to give myself an evening off.

I tossed on a jacket and my usual light-duty riding gear and hit the road for as much gravel as I could find. These are the times when my favorite bumper sticker ("A hermit has no peer pressure.) strikes a chord that sounds good and true. It would take almost no more pressure than a light shove to push me in a southwesterly direction that might last for a few hundred, or thousand, miles. I've been craving a South American trip for 20 years. Maybe I need to take another shot at learning Spanish?

Red Wing is blessed with dozens of great dirt roads barely a couple of miles south of my house. The jacket is rubbing the gashed up places on my arms raw and the irritation goes nicely with my mood. I snagged a vein on my right hand on the steel siding of the house and my glove reopened that wound, staining the leather in pretty much the same shade it probably was when it came off of the steer. My foot throbs from the bunched up support sock, caught between my boot and my socks. I banged my head against a nail when I was pulling up the rotted wood to get to the cracked and leaky concrete under the porch. My list of dinged up body parts grew substantially today and all of that crap will be hard to ignore when I get home and try to sleep tonight. On the bike, it all goes away for a few hours.

My winter in New Mexico, riding on the deep sand at Elephant Butte Lake and out in the country around the Rio Grande River and out near the Rockin' Ass Ranch, put me back on top of the kind of road I'm taking out my frustration on today. Piled up sand and gravel is just gruel for my back tire. I'm on the gas more often than not, daring the road to go somewhere I can't follow.

This may not be the right frame of mind for a safe ride, but it is absolutely the right mood for hammering a sandy back road. Nobody on this path but me and I'm not slowing down until I feel like it.
Posted by T.W. Day at Monday, July 20, 2015