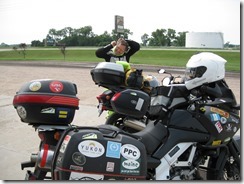 Getting from Minnesota to New Mexico is a long, boring haul; at least by popular opinion. You either have to get through South Dakota, Nebraska, Kansas, or (dead last resort, Oklahoma and Texas). The Black Hills are an upside to the South Dakota route, but the rest of the state is generally considered to be painfully boring. Personally, I have a preference for Nebraska since I lived in that state for a dozen years and know a good bit of it pretty well. US 20 through Nebraska’s wide open and mostly-undeveloped plains and a good bit of the sandhills is a really special trip. The downside is usually that northern Nebraska in July is a windy oven. We lucked out and the day was cool to warm with enough precipitation in the air to provide us with air conditioning and a cool breeze.

We had breakfast in Atkinson (I think) and a fuel stop in Valentine. Being the arrogant asshole I can often be, I decided to blow off the mandatory 100 mile fuel stop just out of orneriness. About 200 miles into that last section of the ride, I began to regret that crabby decision. We stopped for Scott to get fuel and I made up for forgetting to bring a water bottle with a quart bottle of orange juice, which I chugged and refilled with crappy tasting local water. I would regret that in about 100 miles as I discovered that orange juice is a vicious laxative. About 50 miles from our destination, I made a panic stop at a filling station bathroom and barely made it out a live. The filling station, on the other hand, probably put out a warrant for my arrest on vandalism charges. Scott was pissed, so I didn’t bother with fuel and we hit the road before anyone else used that bathroom. Lucky for me (‘cause Scott would never let me hear the end of that story), I made it to Chadron without running out of gas. When we finally stopped, I put 4.97 gallons into the 5.8 gallon tank, in fact. I coulda made it another 50 miles at 55mph, which is what I’d dropped down to in the last 30 miles to save fuel. 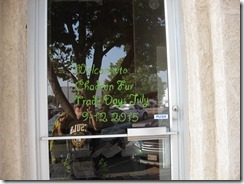 Chadron is a gateway to lots of stuff: the Black Hills, the Rockies, and in the other direction most of the central portion of the country. It’s bigger (about 6,000) than most of the towns in that territory. There is a lot happening, especially during the “Chadron Fur Trade Days” (Nope, I didn’t make that up.) It was a good end destination and one that took us a while to settle on.

Between Atkinson and Chadron, I was wrestling with deciding what route I would take home and how far I’d take this trip. Scott was going home, to Santa Fe, and had his path picked. I was torn between taking an extra day or two to get into Colorado and touch on the Rockies, taking a mid-Nebraska route back through Nebraska Highway 2, or going up through the Black Hills before turning back.

With that Monday deadline hard and fast, I would absolutely have to be home by Monday at noon but since I would only have 24 hours to hang with the friend who was visiting from Atlanta Sunday would be a more practical “latest” arrival and Saturday would give me some margin of error in case one of the many problems I’d spotted on the V-Strom turned into a game stopper. If I went further west, into either Wyoming or Colorado I’d have a half-day at most to get to and into the mountains before turning back. The more I thought about that, the less I liked the idea. Scott was wrestling with stopping in Chadron or continuing on to Alliance, NE that night. We made Chadron about 5PM, so we could keep going either together or separately and make other stopping points by dark. I decided to flip a coin, north or south, when we stopped for fuel. I hit heads for north and that decided the Black Hills for me.

The last decision to make was dinner and a motel in Chadron or move on separately. Either way worked for me. We were tired and a little hungry. Scott took a bit to decide, but we ended up going for one more motel and another evening of bullshitting and hanging out. We found a killer coffee shop, world class in fact: Bean Broker Coffee House and Pub. We wandered the downtown area, talked to a few folks about fur trading and other bullshit, and spent a couple hours hanging out in front of our motel room talking to a guy who had lost all of the fingers on his right hand in a farm accident when he was 13 and all of the toes on his right foot in a motorcycle crash when he was 17.