The editor of Minnesota Motorcycle Monthly got confused last month and pulled an article from the blog (instead of the cloud folder I created for him) and published Being Customer Hostile in the March issue of MMM. For starters, this was a pretty old essay (2007), written after the disappointing turnout for the last World Round in Duluth. The month after MMM's editor pulled this one from the blog to use in my monthly "Geezer with A Grudge" column, Victor Wanchena (MMM's publisher" wrote this in his own magazine:

Letter From A Reader
Dear MMM,

I read Thomas Day's Geezer with a Grudge column "Being Customer Hostile" last month and was surprised by his lack of understanding of the sport of Observed Trials. For someone as "experienced" as Thomas his whining about having to walk to a section, read a map, or needing to have a basic understanding of the competition he was watching was both funny (in a sad way) and another example of his apparently faltering mind.

In previous columns Thomas has bemoaned the laziness of the American rider, but now the one time he's asked to walk as a spectator he is outraged. He thinks the rules and set up of the events is designed to make it intentionally difficult for spectators but offers no evidence of that other than his poor understanding of the sport. And then he decends into one complaing after another for some undecipherable reason. His sweeping generazations about the sport, the riders, and the spectators only reveals his ignorance.

I ask the question, why is Thomas really mad at Trials. Is he intimidated by a sport he isn't competing in? Is he looking to pick a fight with the most obscure group of riders he can find so he can act tough, but doesn't get buried in hate male? Or is he just trolling becauses he knows the publisher of MMM is a long time trials rider"

So, I wrote back:

There must be something about the work you do that makes you read between the lines and misinterpret. Bruce snagged that one from my blog , which is where all of my slag stuff (and previously published stuff) goes. I'd written that bit about trials not long after the last world round in Duluth and I was really disappointed, again, at the lousy turnout and general level of confusion spectators experienced. I hadn't looked at that one since I wrote it and scheduled it, about 5 years in advance, for the blog. I have no idea why Bruce went to the blog for material. I have a slush pile of stuff specifically written in MMM on the Dropbox folder. It's nothing new, of course. In the US, observed trials can't draw flies and some of that is due to the fact that promoters, participants, and other so-called "interested parties" don't seem to give much attention to spectators, especially non-off road savy spectators.

Here's what I wrote about my experience, "I walked by more than a few frustrated spectators on the Saturday event who were patiently waiting for riders who wouldn’t come for another 24 hours. When I mentioned them to one of the checkers, he muttered something about 'fuckin’ rubes' and went back to examining his navel until the first batch of riders arrived. When I walked my dog back to the stranded spectators and told them the real section was just a couple hundred yards down the trail, they decided it would be more productive to head back to the Aerostich rally and watch a few of the presentations in the air conditioned chalet. To be honest, I had some of the same inclinations after waiting for an hour and a half for the expert and pro riders to get to sections 4 & 5. I’ve been putting up with the rock and roll star character of observed trials for 40 years and the prim donna attitude toward spectators still gets to me. (Just like waiting until 9:15 for an 8:00 show to start will remind me of why I rarely spend much money to watch a rock show in my impatient old age.)"

If that reads to you like "the one time he's asked to walk as a spectator he is outraged," I'm not going to expect you to get me at all when I'm really outraged. I was walking and riding sections when you still assumed "trials" were what put people in jail. Hell, you might have still been in diapers in 1974, when I bought my first official trials bike. At that particular event, I was lugging 40 pounds of HiDef video camera and audio recording gear with me. That won't happen again. Any day now, walking will become something I don't much because with a fake hip and another going away, a bum foot, one heart attack in the bag and lousy genetics putting more in my future, and my 70th birthday on the horizon, don't expect big miles out of me ever again. I quit backpacking, permanently, three years ago and we'll see if tent camping is still something I do this year. I don't write between the lines, so anything you think is implied in my words is self-generated. Personally, I'd have been more outraged at the attitude of the civil-servant-attituded checker who didn't give a shit that spectators couldn't figure out how to see anything but the B-team. I don't know if you paid any attention to that last world round, but it was a big money loser for the organization.

Some of the inspiration for that essay came from a video taped interview I did with Martin Belair a couple of years after Honda had withdrawn his Honda Montesa trials distributorship. I learned more about the US trials disorganization in that interview than I wanted to know. Not long after that, he left trials, supposedly, for good and asked if I'd take down the MMM interview from both my blog and MMM's site (I didn't) and that I not air his portion of the trials Motorcycling Minnesota program I was editing (I decided to can the project). In case you're still confused, I had no problem reading the map, figuring out the rules (that the observers too often ignore), or sorting out the schedule but I couldn't figure out from your "sweeping generalizations" about my essay what the hell you were talkiing about. I can not figure out why you would pretend to be a "Concerned Reader" and not actually read the magazine you own. Could it be a "faltering mind" issue?

I went to every US and World event in Duluth and when I lived in California and Colorado I saw another couple of world rounds and several US rounds. Back in the 70's I had the world's worst trials bike, a Suzuki RL250, and I was an active member of the MWTA for several years. I love the sport, but the difference between a US event and a rest-of-the-world event is night and day. Being pissed off at spectators who can't figure out the maze of weirdness that is characteristic of our events probably won't fix much of that.

Could be my last MMM article, but at my age I'm experiencing a whole lot of "lasts" this year. Every year, I think a little more about what sort of convertible I'll buy when the motorcycles are gone and I have extra garage space. Weirdly, between the MMM and Rider's Digest backlog and the dozens of weird things I've still got in the queue, I'll be posting stuff on this blog until late 2017 if I kick the bucket tomorrow.

Victor has done a weird disconnected rant about one of my articles he's picked for publication before, so maybe we've about run our course for this Geezer thing in MMM. It's been a good run, since my first article What Are We Riding For? in October of 1999. The last time he threatened to tear up my yard with his blimpmobile KTM for some damn misreading of my column. It's getting a little weird and life is weird enough without searching for it.

Likewise, this might be my last year teaching MSF classes, after last year's fascia plantar fiasco that cost me about 3/4 of my planned teaching season. The foot is better, but it's not back anywhere near good and I have no expectations that it will be ever again. My patience with the whole teaching thing is waning and pain isn't helping things. This year, I've booked 4 classes instead of my usual 16-20. We'll see if I can get through that few.

One one of the above-50F weekend days this month, I went to the Red Wing MSF range and ran through the exercises a few times. I was ok, not great but competent. The practice gave me some time to think about what would make me quit riding. Or, more to the point, a decent, reasonably safe, measure with which I can use to decide it's tine to quit. The day I flub one of the exercises in the Basic Rider Course is the day I give it up. The BRC and the state's motorcycle exam are so far from the benchmark of rider competence that those tests and exercises should be used as an absolute dead minimum cutoff for riding. If I struggle with those minimal skill requirements, I'm not competent to ride on the streets. Your mileage may vary, but mine won't.

The MMM version of the article is here, http://mnmotorcycle.com/march-2016-geezer-with-a-grudge-being-customer-hostile/. Maybe Victor's just fishing for comments?
Posted by T.W. Day at Wednesday, March 23, 2016 3 comments: 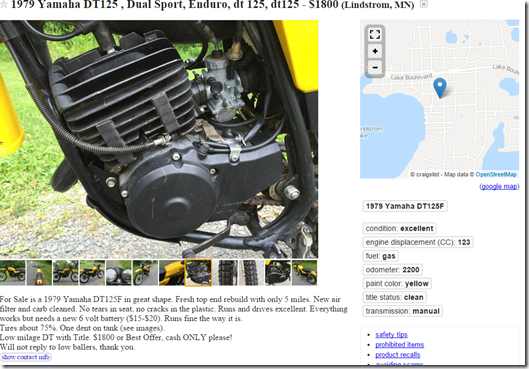 This fine piece of history appeared on MN’s Craig’s List today. I have to admit I have a soft spot in my head/heart for these old Yamaha Monoshock two-strokes. Where that hardens is illustrated by this almost-like-new motorcycle. It needed a “fresh top end” with only 2300 miles on the odometer. Those look like vintage tires, too.