#13 When Dealers Were Interesting

Have you ever seen that Monty Python routine where the three old geezers are telling each other about how hard they had it when they were kids? It ends, after the three old liars have topped each other with stories that are so outrageous even dirt bikers wouldn’t believe them, when one of the geezers says, “. . . you try telling young people of today that, and they won't believe you."

This is one of those stories. But it's true. At least, it's mostly true. It's as true as my fading memories can make it.

When I was a kid, we had three motorcycle dealers in my hometown. The upscale shop was a combination farm supply store, John Deere dealer, and a Honda/Harley Davidson dealership. Later in my motorcycling "career," I wore out my welcome at that place by buying at cost, begging, and stealing parts for my Harley 250 Sprint scrambles bike. But before that, I never even considered that dealer as a possible target for my attention because everyone who worked there was reasonably intelligent and they immediately recognized me as a non-customer.

The second option was a shop that sold Suzuki's and televisions. This guy was also semi-intelligent and I couldn't fool them into letting me touch their bikes, let alone ride one.

The third guy was the kind of dealer who made motorcycling . . . accessible. Without "the Captain,"1 I suspect that my hometown would have never had reason to worry about kids on motorcycles. He got his nickname from his costume; leather flight jacket and leather pants, tee-shirt, Marlon Brando riding cap, and lineman's boots. I don't mean that he had a wardrobe of this stuff, I mean he wore the same leather gear, hat, and boots every day of his life. It's possible that he changed his tee-shirt and socks, occasionally. He probably found the inspiration for his gear from "The Wild Ones." Or the movie got the look from him. He was the only one of the three motorcycle dealers who actually rode a motorcycle. The Captain must have been independently wealthy, too. I can't think of any other way he could have financed his business. His business "plan" was something like, "Buy one of every cool motorcycle made in Europe, cram sixty of them into an abandoned gas station, packed bar-to-fender, and get drunk by noon seven days a week." By the time I was fourteen, this strategy must have been near to exhausting his resources. He hadn't bought a new motorcycle for at least a couple of years and I doubt he'd sold more than one or two in that period.

In fact, in my first nineteen years of life I only knew a couple of riders who'd bought a bike from the Captain. However, almost every kid I knew had obtained a test ride on one of the Captain's bikes. I learned the drill when I was twelve, but didn't make the necessary connections to pull it off until I was fourteen, when I met some of the town drunks at the local cowboy museum. A bottle of cheap whiskey was the ticket for a test ride on one of the Captain's three accessible bikes. Like most things in life, you had to know someone to get anywhere and I, finally, knew a drunk who would buy me a bottle of whiskey if I gave him enough money to buy two. On a Saturday afternoon, after spending $6 on booze, I bicycled to the Captain's shop and negotiated a ride. It was much easier than I'd imagined, even with my pitiful small town haggling skills, because the Captain was already half-soused when I arrived. He waved at the bikes he'd set on the sidewalk and staggered to the back of the shop with my gratuity. After I fumbled around for a really long time, trying to figure out how to start one of the bikes, he came back and fired up a black, twin-cylinder bike, on a couple of kicks, and pointed out the brakes, shifter, and clutch. I'm sure this was significantly short of official MSF training, but it was enough to get me on the road. In retrospect, I'm pretty sure that I got my first bike ride on a late-1950s BMW or Guzzi. At the time, I had absolutely no idea how incredibly cool that was. In my mind's eye I remember the bike as an bucket-seat boxer, so, I'm going to refer to it as a BMW. The truth is, it could have been anything, because I couldn't tell a Harley from a moped.

Heading south from his shop took me straight out of town, without a stoplight or sign or a single turn to negotiate. That was a good thing, in some ways, because it got me through minimal traffic without incident. On the other hand, I managed to ride the bike about fifteen miles before I tried to turn around; and discovered that I didn't have the slightest idea how to maneuver, shift, or stop the bike. I tried to make a twenty-five foot U-turn on an eighteen foot two-lane highway; and received a two second lesson on the difficulty of off-camber turns. I drove the bike into the ditch and fell over.

After a few minutes of intense struggling, unskilled cursing, and several second-degree burns, I got the bike back on two wheels. No matter how hard I kicked the starter, it wouldn't start. I'd started my tour a little before dusk and it was beginning to get dark. I started worrying about what the Captain would say when I walked into his shop and told him where the bike was. I was really worried about the possibility that he'd call my parents and tell them what I'd done to his merchandise. Even at my most creative, I couldn't even begin to design a story that would hold up to my father's interrogation.

I got lucky. A ranch hand stopped, backed up, and parked his pickup on the edge of the highway. He helped me haul the bike back to the road. He grumbled about having to mess with "European junk," but he got the bike straightened out and aimed towards town. When he saw that I didn't have the slightest idea what I was doing, he started it and held it steady while I mounted up, fumbled with the shifter till I found a low gear, and got it rolling toward town. I suspect that we repeated parts of the starting sequence, with him doing the starting, until I found the right gear. I probably stuck with the starting gear for a good bit of the trip back, too.

My luck held all the way back to town. No cars, no turns, enough fuel, and no reason to test my non-existent motorcycling skills until I pulled into the Captain's shop. I stopped the bike by rolling it into the side of his building. I picked it back up and pushed it into position beside the other bikes. The Captain didn't bother to observe my mishandling of his inventory, so I pedaled for home without saying a word to him. He was probably in a booze coma, so it wouldn't have mattered anyway.

You'd think this debacle would have dampened my interest in motorcycles. It didn't. A year or two later, my brother and I became co-owners of a Harley Sprint 250 and I scrambled on that bike until it was completely useless for any purpose. Twenty-eight years later, I still get almost the same kick out of riding my bike to work in the morning as I got on the open road south of my home town. "You try telling young people of today that, and they won't believe you." 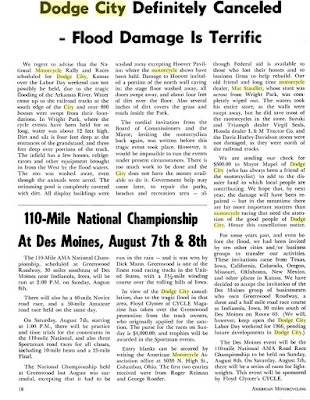 Postscript: when I submitted this article to Fast Biker Magazine for the August 2020 issue, I found a couple of pictures and an article about Mac's shop and added them to this page. I was still in Dodge when this flood happened, but I don't remember Mac's shop being "swept away" or the bikes being washed away either. Could be, though. It was a long time ago. My grandparents had a flooring shop on the other side of the tracks and we sandbagged the heck out of that place.