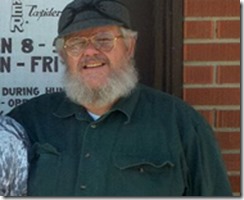 Barry Strang wanted to be a Harley owner his whole life. After 38 years of wishing, he bought one and killed himself on it within a few minutes of riding it off of the dealer’s lot. The local newspaper reported his crash and death, “He was riding his long-awaited Harley Davidson northbound on Highway 789 when he negotiated a right-hand curve and, for unknown reasons, collided with the drive axles of a truck tractor, according to Wyoming Highway Patrol report. Strang was ejected from the motorcycle and went under the tractor-trailer. His helmet flew 30 feet away.”

I suspect everyone who reads this blog knows that Mr. Strang was not killed by his 38 years of wishing, but by his lack of motorcycle training and experience. Nothing in the article says he was in any way a trained or skilled motorcyclist. In fact, the article implies that he might not have been legally licensed. “Officials said the collision may have been because of Strang's unfamiliarity with his new motorcycle.” 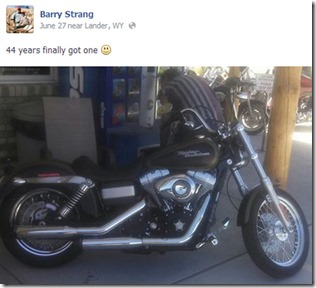 He was following a semi pulling two tanker trailers and plowed into the back of the second trailer in a curve. It’s an easy-to-visualize crash, especially given the low state of rider awareness and skill exhibited by an overwhelming number of bikers. It was avoidable in multiple ways. Strang’s son imagines that “Dad died with a smile on his face.” Those of us who have had jelly-side-down moments know that is a happy fantasy. Barry Strang’s last moments were filled with panic. All of his reactions to that panic were wrong and that builds momentum to the stress and fear. Supposedly, he died instantly and that is probably the best we can hope for him.

It’s a sad, too often repeated story. I wish motorcycle ownership had worked out better for Mr. Strang. No one deserves the pain and disappointment his family and friends are feeling now. There should be some accountability from the dealer for sending this man into traffic with minimal safety gear (His helmet “flew” off?) and, possibly, no license, from the state for having such lax vehicle sales and dealer licensing laws, and, even, from the manufacturer for promoting a lifestyle instead of being responsible about including the risk and injury statistics in their advertisements. Automobiles and motorcycles and bicycles are dangerous devices and they require skill, concentration, training, and they should only be for sale to those meeting appropriate standards.

I’ve said it before, a motorcycle is not a fuckin’ wheelchair. You can get into more trouble faster on a motorcycle than any vehicle I know of. That ought to be the message so-called motorcycle safety organizations are shouting to the rooftops. Screw “Start Seeing Motorcycles." Fuck “Loud Pipes Save Lives.” And everyone who is wasting air arguing against helmet laws ought to have to scrape up one of these catastrophes for every time that stupidity is uttered. Our ads ought to say “get trained or get killed,” “AGAT or DOA, your choice,” and a battery of nasty crash pictures should follow to emphasize the point. Stuff like this is bullshit and anyone who minimizes the risk and responsibility deserves a world of hurt and misery.