[Thanks to an invitation from Denny Delzer, in mid-September I visited with a group of people who have the polar opposite of my wimpy plumbing attitude; the Vincent owners group.]

Last year, I rode my Kawasaki Super Sherpa KL250 to work, via freeway and residential roads, every day from the moment school started. This year, suffering a catastrophic early summer countershaft oil seal failure, I've ridden the 250 maybe a half-dozen times post-repair. After replacing the oil seal the 2nd time and an o-ring (during the 2nd replacement), the bike appears to be mostly dry. It still drools a bit and that bugs me.

Yeah, I'm still running synthetic oil. Hell, if the bike is going to spontaneously dump all of it's oil in a couple of seconds, I want that oil to be something that gives me a few moments to get stopped before the motor seizes up.

I've done all kinds of repairs on all kinds of motorcycle failures, but it appears that a bike losing all of its oil in one quick Valdez-style dump put some sort of permanent dent in my confidence. When I go out to the garage in the morning, I just walk right past the Sherpa to the V-Strom. Work is a 6 mile commute, so the Sherpa is the perfect bike for the ride, but I don't even think about it. When I get home, I give the little bike a glance as I'm parking the 650, but I'm mostly thinking about pushing the Kawasaki to the back of the garage to get it out of the way. I guess it's official, I'm a quitter.

As a reminder of my inability with fluids, our kitchen bathroom toilet "automatically" refilled itself the moment I finished typing the last paragraph. I've been fighting with that damn toilet for years. Every once in a while, I decide I'm tired of wasting water and head down to the hardware store for another attempt at finding a flapper valve that will fit this toilet. I always fail. Apparently, there is nothing made that even gets close to fitting the opening at the bottom of my toilet's tank. So, it leaks and refills itself every few hours.

I hate plumbing. It's probably the Brit in me; about 50% of me. I can accept the insult implied in an Autopia article about the all-electric Evo Designs EV-0 RR (Electric Vehicle, zero emissions, Road Race) bike was titled "A British Motorcycle that Doesn't Leak Oil." My inability with fluid control probably explains why I became an electrical engineer. Plumbing frustrates me to the point of threatening to remove all of the indoor plumbing in my house and install chamber pots and an outhouse. I'd rather freeze my ass off outdoors in -25F Minnesota weather than admit being beaten by my inability to contain fluids. 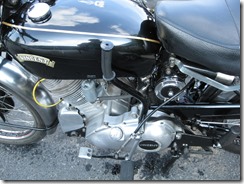 Thanks to an invitation from Denny Delzer, in mid-September I visited with a group of people who have the polar opposite of my wimpy plumbing attitude; the Vincent-HRD Owners Club. They were having their annual North American Vincent Rally in Cannon Falls and those folks are not only unafraid of a little lost oil, they seem to revel in oil spots; big and small. All across the motel parking lot, Vincents were in various states of disassembly, forming spots and puddles of oil under their oil pans. The Cannon Falls' environmentalists were in shock. The Vincent owners were up to their elbows in their natural element.

"You got a busted valve spring, have you? Want me to have a go at fixin' that, mate?" 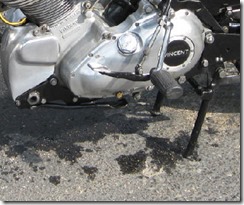 "Busted valve stem? No problem, mate. Anyone got a torch and a coat hanger? We'll have that back in shape in a jiffy."

Some of these 1930's to late 1940's bikes came to Minnesota from Oregon, British Columbia, Alberta, New Jersey, New York, Tennessee, Pennsylvania, South Carolina, and Virginia. Some of them were ridden all the way, some were trailered. More than a few sported Minnesota plates.

One, Dan Smith's built-from-the-ground-up "HRD" replica, took it's maiden 650 mile voyage to be in Cannon Falls. Dan labored over this machine for two years before firing it up and loading up his gear and wife for the rally. In Aberdeen, his home-built engine broke a rod. He brazed the rod and he and his wife arrived on time and a little worse for the excitement and wear. Not many factory one-off attempts could hope to do better on their first major test.

Denny introduced me to a boatload of Vincent owners and Vincent-famous mechanics and builders. I'm apparently Vincent-famous for stalling Denny's bike on my short test ride and managing to get it back without blowing anything up. I could be known for a lot worse.  For two days, vintage Brit iron rambled all over bits of Minnesota. I came through Northfield and spotted a half-dozen Vincents parked near the Defeat of Jesse James reenactment. Several riders explored Redwing and Wisconsin on Saturday morning. With each tale of exploration came a co-existing description of some broken bits that had to be cobbled together to finish the ride. Being able to fashion a clutch plate out of a beer can is as necessary a skill for Vincent owners as it used to be for dirtbikers. 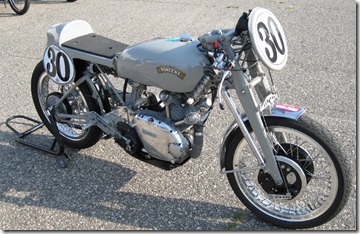 There were all sorts of Vincents at the rally. Most of which, I knew nothing about. The Vincent Black Prince and Black Night, the forefathers of the Honda PCH and Goldwing and Victory's Vision and every other faired touring bike, was probably my favorite. Next on my list would be some of the Vincents custom-fitted for LD touring. Among the oddities was a Vincent dragster and a beautiful silver road racer.

Other than being a little touchy about being approached by an old guy riding a modern bike, a serious copout by any Vincent standard, the Vincent crowd was a lot of fun and incredibly generous. On my way out, just before the concours event, I was handed a commemorative Vincent cookie which was as much a work of art as the bikes. It didn't survive the trip home, so I ate it. It tasted as good as it looked.

[Note: There are a lot more photos of this event in a slideshow at http://geezerwithagrudge.blogspot.com/2009/09/2009-vincent-rally.html. If you find something there you like, let me know and I'll be glad to forward the originals.]