Leave Us Outta This Shit! 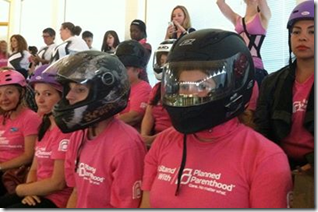 Big Government douchebags in North Carolina (go figure) swapped a discussion and bill about Motorcycle Safety for an under-the-sheets anti-abortion ambush on July 10. A day later, the wingnut bill was passed and that set off a firestorm of protests from a collection of people who had been deluded into imagining that the North Carolina state government represented the people of that state. Now, women’s rights protestors can hate us, Republicans, and fundamentalists all in the same group.

I want to go on record that I have nothin’ to do with anything related to Republican politics. I am solidly one of the 99% and don’t even thing living people need to go on livin’, let alone the unborn. The more people there are in the world, the less room there is for me and anyone who doesn’t want to be a parent is clearly making a positive contribution to the world. There are more than enough unwanted kids on the planet. Hell, everyone who thinks we can go on spewing carbon into the atmosphere, cranking up the earth’s surface temperature, and polluting the oceans is clearly convinced that there is no point in worrying about the future the X-gen will suffer, let alone their kids and their grandkids. So, noise or now, we’re all on the same side. I don’t want people litterin’ my planet and the “other side” doesn’t want any people at all in the clearly foreseeable, and uncomfortably near, future.

So, why can’t we all just get along and get back to working on motorcycle safety. Seems like something we could all agree on; except for helmet laws, reasonable licensing standards, noise abatement, lane sharing and filtering, and pirate parade permits.