Glad We Aren’t Them

A few years ago, I wrote a rant about the dumbasses who spend thousands on bicycles (“My Kind of Market”). I was clearly reminded of that this week when I went shopping with the idea of replacing my 25+ year-old bicycle with something “more modern.” In that old (2009) article, I de   scribed “‘the secret of a successful retirement’ . . . is to find a product or business that had past its prime, but still had customers with money to spend.” went further in insulting the lame state of “bicycle technology” with “If you don't believe me, check out a high end bicycle shop. Look at the $2,000-10,000 bicycles and explain to me how a 22 pound bicycle can cost as much as a liter sportsbike. Better yet, look at bicycle helmets. Those things are as low-tech as a motorcycle faceshield and, yet, a ‘decent’ bicycle helmet can easily set you back $100-250. There is no way a bicycle helmet has even a fraction of the manufacturing/liability costs of a motorcycle helmet, but even with a much larger customer base bicycle helmets' retail price is in the same ballpark. Bicyclists are clearly a total sucker market, but that is so obvious that everybody wants a piece of it and bicycles are unlikely to ‘approach obsolescence.’” 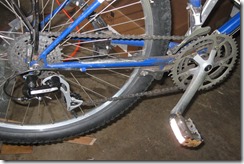 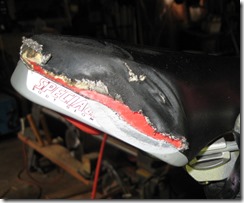 So, here I am with a pretty rashed up almost-30-year-old bicycle, some cash to burn, and a lot of time to shop. What I found was that bicycle technology, in general, has gone absolutely nowhere in 30 years. Other than the super-high-end where you find frames with exactly the same geometry made from exactly the same materials as that same price bracket from 30 years ago--but with the minimal “improvement” of disc brakes—nothing noticable has changed for the better. Prices are higher, the rest is the same. So, why would anyone buy new, if ancient would suffice? The answer, for me, was “I can’t do it.”
As beat up and bashed around as my “obsolete” old Supergo bike is, it’s as good or better than state-of-the-bicycle-art, because that art hasn’t moved in decades. So, I went to my local bike shop, bought a cheap Shimano rear derailleur, disassembled a bunch of bits that should have been disassembled and lubed years ago, slapped it all back together and went riding. 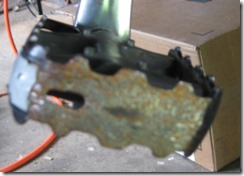 A kid took a look at my rashed up bike while I was stopped at the NAPA store getting oil for my motorhome generator and said, “Man, that must have been one hell of a crash!”
I didn’t look at him when I said, “About 45mph and it slid for two blocks before it was all over.”
He looked at me like I was Red Bull’s Robbie Maddison and said, “Damn! What about you?”
“No problem, kid. I’m good.” And I actually managed a whimpy little wheelie when I hopped the curb  and rode off. Fuck a new bike. This one has character. (In fact, I’ve busted more bones, torn up more muscle and tendon on this bike than all of the motorcycles I’ve owned in my life.)
I am, however, that motorcycle engineers are far more creative, inventive, harder working, and every other good thing that bicycle “engineers” are not. Otherwise, we’d all be riding Harleys and I’d be bored to death.
Posted by T.W. Day at Sunday, July 07, 2013

Did you actually ride a "modern" pushbike? Clearly not otherwise that 25 year old blue pretzel you are still riding would be under a heap of prawn heads in a dumpster somewhere.
Just like a 25 year old motorcycle compared to a modern one, they are like chalk and cheese once you ride them.
Pull ya head in...!

Dude, you're kidding yourself. Where, exactly, do you think "modern pushbikes" have improved? Where, exactly, did you get that 18th Century term? Are you 100? Hell, I thought I was old. Modern brakes, outside of the high end disk brakes are a step down from my bike's performance. The wheel is pretty tough to improve on and modern bike bearings are all made in China and way worse than 20-years-ago products. Chromemoly and aluminum are pretty much unchanged. Suspensions just add weight to the bike and are pointless unless you're seriously downhilling it offroad. What's left? Paint? Get real.