Why I Hate Cruisers 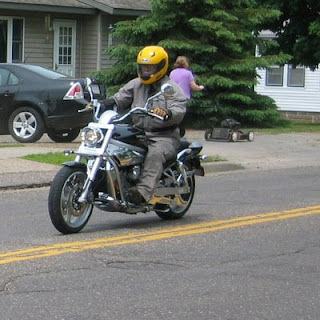 What a totally bogus title. I don’t hate cruisers. They are inanimate objects. You should reserve a powerful emotion like “hate” for vicious characters like Nixon, Reagan, Georgie Bush and his sidekick Little Dick Cheney, Sideshow Bob, and the Anti-Truth (Fox News and their cast of clowns and freaks). I don’t hate cruiser owners, either. Some of them are among the lowest of the low, but they advertise that fact with their patches, tattoos, and crimes. Most folks who put on Village People costumes and ride a hard 50 miles-a-day from bar-to-bar on their big iron are mid-life-crisis walking wounded and are no more dangerous or despicable than the guys who dress up in gray flannel in Civil War enactments. So, really what this rant is about is why I dislike cruisers and the culture from which they are spawned.

First and most obviously, I can’t find a purpose or a function for the basic cruiser design.

It’s just a dumb-looking design without a single practical consideration. I once suffered through a Discovery Channel program on the history of motorcycles and that program tried to explain away the dopey riding position as being reminiscent of western cowboy saddles. I grew up riding western style saddles and I always had my feet under me anytime I was horseback. I’m completely unconvinced that sticking your feet in a pair of gynecologist stirrups is western, macho, or functional in any way. The “style” is derived from the piles of crap that the gangbangers chopper crowd rode during the days when only degenerates and Europeans rode motorcycles.

The riding position is primitive and uncomfortable. The chassis design negates all of the advantages of a motorcycle. The long, low, heavy, low ground clearance means the bike can't be maneuvered quickly in any kind of emergency. Cruisers can't turn, they can't get over obstacles, they can’t stop quickly, they can only accelerate in a straight line, and they are too heavy to get out of their own way. From a motor vehicle perspective, a cruiser is the equivalent of a Cadillac or, even more accurately, a single-passenger limousine. In other words, useless.

Most cruisers start with a single positive mechanical attribute; they are tuned so mildly that they can get pretty decent mileage when driven conservatively. Cruiser owners “fix” that almost immediately. Put on a noisy pipe, drill random holes in the intake system or put on a geeky chrome airbox and fuel efficiency will be sacrificed for the god of peak power at some random, probably unusable, rpm.

As far as the low CG advantage, that’s only useful when the bike is stationary, which (I guess) is a cruiser’s normal posture. Almost any inseam-challenged, overweight invalid can waddle a leg over a typical cruiser’s seat. A “tall” cruiser will have a 31” seat height while most customs will be modified so that small children can perch comfortably on the seat while planting both feet firmly on the ground. The other advantage to this “design” is that the bike practically stands itself in a parking lot. Like a sand-bottomed Bozo the Clown punching toy, with a pair of flat profile tires, a cruiser is a free-standing structure.

That, of course, is only an advantage when the bike is in a parking lot or barely moving. If form isn’t following some kind of function, I find no useful purpose for the form. A friend once said the cruiser “form is the function” and that lost me even further. If cruisers are art, I’m outta here. I don’t like non-representational art unless it’s on wallpaper and blends in with the furniture. I may not know art, but I know what I like; especially in motorcycles. A cruiser’s primary purpose appears to be to look impressively sedentary parked in front of a bar. I get that function from a rocking chair on my porch.

Tnere are folks who put the lie to my analysis, I'll admit. There are people who put long touring miles on their Harleys, Victories, and such and they amaze me. They are the exception to my "rule" and, as such, are exceptional. Sometimes I suspect they pick these ungainly, unsuited motorcycles just to prove that they can be ridden (tamed?) like a real motorcycle. I have the same kind of attitude toward really small motorcycles out of a similar motivation.

Humans are an irrational animal.

The social and historical aspects of cruisers turn me off even further. The riders who gravitate toward cruisers display a collection of traits that oppose most of what I believe in. Don’t get me wrong, there are lots of very nice people riding completely silly motorcycles. Even some of them appear to be ignorant of what their ride-statement represents.

For example, the Nazi paraphernalia. A rider who also teaches MSF classes thought it was funny when I mentioned how insulted my WWII vet father would be seeing him displaying an airbrushed Nazi helmet. The guy is an ex-Marine, ex-policeman for cripes sake! How can it be that hard to figure out? Is there something about Nazis that I don’t know?

It gets a whole lot worse. I know bikers who sport Nazi swastikas and Harley tattoos, side-by-side. Biker rallies co-exist and cohabit with Klan’ers, skinheads, coke and meth dealers, gangsters, and all kinds of vicious, evil creeps. The posers who imitate the biker “style” don’t seem to realize that they are linking themselves with the worst of the worst.

The other social appeal for cruisers seems to be a freaky desire to turn back time to when men were boss and non-white men need not apply. The basic design of the “modern” cruiser recalls the crap that Hardly and Indian were making in the early 50s. Heavy, plodding, underpowered two-wheeled tractors that were more about sound than fury. All the 50s nostalgia recalls for me is fruitcakes like Joe McCarthy and lazy, do-nothing politicians like Eisenhower. The 50s were a time when superstition ruled our education system until the godless Russians gave us a demonstration of the axiom that “the only constant is change.” Of course, once science and engineering became popular areas of study, superstition took a lot of hits and off we went into the godless 60s and 70s.

From a public nuisance standpoint, it is, apparently, practically impossible to simply ride a cruiser. The kinds of people who pick this style of bike also want to announce their presence. Loudly. Their disrespect for my privacy and neighborhood goes right back at them every time they rattle my windows as they roar out of the corner in front of my house. You’d expect that kind of antisocial behavior from teenagers. Geezers blasting rapid fire farting noises are a different kind of retard. That kind of low tech cobbling passes for “customizing” and engineering in this breed of quasi-vehicle and I have to say I find it insanely boring and incredibly irritating.

The damage cruiser doofuses are doing to motorcycling is high on my list, too. They often pick these rolling wheelchairs because they are too fat, too incapacitated, and too scared to swing a leg over a real motorcycle. The prime quality of a typical cruiser is the low seat height. Some of these disabled machines are practically miniatures, with the associated useless suspensions, micro-powered motors, auto-pilot straight-ahead steering, and underpowered brakes. The obvious result is that near-cripples are riding these things into traffic and dying in large numbers. If they keep it up, they are going to give motorcycling such a bad name that no amount of whining by the rest of us will save our vehicle of choice from being banished to go-cart and snowmobile status.

Finally, I have to admit that I think the majority of cruisers are simply eyesores. All that shiny chrome placed in random patterns on badly welded low-grade steel chassis decorated with girlyman fringe and creepy, low-tech paint jobs grates on my nerves like a late night frat party that I can't shut enough windows to allow escape. To my eye, they are incredibly ugly and I can't get past that. It's no more rational than a "no fat chicks" tee-shirt, but ugly is as ugly does and cruiser owners do a lot of ugly.

There is a reason for this longwinded explanation. Stay tuned and all will be revealed.
Posted by T.W. Day at Wednesday, June 18, 2008