The Repercussions of Having an Opinion

This summer, I reviewed a bike that put me in an ethical bind. I really liked the folks at the dealership, although they were clearly not motorcycle people. The dealership was a hardware store trying to get into the exciting, high-profile, profitable scooter and motorcycle market. Yes, I'm joking about the characteristics of our market but I'm not joking about their expectations for that same business. They were almost childishly anticipating a flood of cash from their entry into American motorcycling. I thought they should have been a little more cautious, since they had only recently dropped Polaris' and were still trying to offload their inventory (two bikes) of last years'

It turned out that the bike was, largely, junk. You can read the review linked to this column for a mild-mannered opinion of that motorcycle. Not only was the quality and design short of modern standards, it was overpriced, unreliable (based on my short and uncomfortable experience), and possibly dangerous.

For example, the clutch grabbed so severely that it would intermittently yank the bike several yards on engagement and disengaged a fair distance from the misnamed "friction zone." The dealer admitted they had experienced this before, the factory offered a "fix" that didn't work, and I still have no idea if the bike can be made safe due to this defect. When my review hit the stands, I got a few calls and emails from Hyosung owners describing their experience with the clutch problems and asking if there was remedy. Since the dealer had decided to toss fuel and a lit match on our relationship, the best I could offer the Hyosung victims was a phone number and web-link for the NHTSA recall hot line.

In my review I tried to briefly describe many of the bike's defects as accurately as possible. There is, or should be, a public service aspect to product reviews and I take that seriously, having been burned a few times by half-honest product reviews. It is hard to be critical of a motorcycle that has been handed over with the expectation of unbridled love, but that's a critic's job.

Of course, the basic design was pretty funny on its own, which added an aspect of humor that was out of my control. The Korean manufacturer went for a really weird and retro chopper look and a totally stupid riding position, which was a regular source of entertainment by everyone who knows me and saw me on the bike.

To be blunt and honest, I hated the bike and think it is the worst representation of the style I've ever ridden. But, I'm no cruiser expert. I do my best to stay off of the damn things and have yet to ride one I'd consider owning. The article says as much. In a form-follows-function world, cruisers have lost their way. The Hyosung was the worst representative of a terrible motorcycle style that I've ever suffered. My review didn't reflect even half of my dislike of the Avitar. As toned-down as it was, the resultant article received the following comments from the manufacturer's sales department:

Where the marketing doofus got the idea that I'm an "editor" is a confusion. He also appears to think my first or last name is "Jackass," which I suppose is more likely than me being an editor. While his own "writing skills" would make most text messengers blush in shame, he seems to feel pretty confident in his ability to blast mine which makes for entertaining reading.

It is interesting that he conveniently chose to forget that MMM had not signed up to review the cruiser. In all the magazine's negotiations, the bike we were anticipating for review was the Hyosung GT650R; a Korean attempt at copying the Suzuki SV650. I was signed on to the review because I ride a Suzuki V-Strom 650 and previously owned and enjoyed an SV650 for 50,000 miles. Neither Sev, Victor, or I would have even considered putting me on a POS cruiser from any manufacturer under practically any conditions. If the goofball sales doofus had done any research, he would have known that MMM, in general, is not fond of cruisers and I, in particular, think they are clown bikes.

Until the Avitar was rolled into the dealer's driveway and my wife had driven away in my escape vehicle, I had no idea that I would be test riding a Shriner vehicle. I would have dressed appropriately, had I known: protective bandana, butt-less leather chaps, Doc Martins, and the usual Harley comedy accessories. As it was, I arrived in full Aerostich gear, helmet, boots, and all. I was as appropriately dressed as a riot cop at a Grateful Dead concert. If I weren't cursed with a Midwestern inability to say "no," I would have recalled my wife and simply left after explaining to the dealer why they did not want me reviewing the Avitar. As it was, the dealer had spent all of the magazine's lead time prepping the bike, delivering it almost two weeks after they had promised it would be ready. Two of the four possible reviewers had dropped out of the pool of writers because of the near deadline and the poor timing. It would either be me and Steven Heller or Steven alone. It probably should have been Steven alone.

So, I can't disagree that with the marketing doofus' basic premise that I was bound to dislike the Hyosung cruiser. A more adventurous manufacturer might have taken my position as a challenge and accepted any level of approval as an accomplishment or an opportunity to fine tune a vehicle that clearly needs critical design input. So it goes and Hyosung was already on record as being "sensitive," since they had burst into indignant flames over Cycle World's mediocre review a few months earlier. 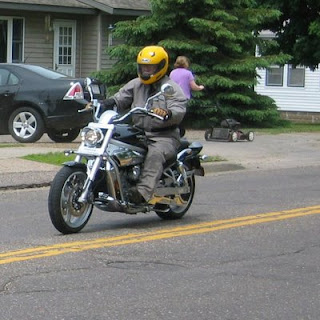 I admit it. I hated the bike. Riding the Hyosung Avitar was almost a crippling event and it felt unsafe at all but in the slowest, least traffic critical situations. My neck and back hurt for a week after escaped the Avitar experience. And the bike is butt-ugly. I did my best to picture it in the best light, including a pretty flattering (in my opinion) picture of the abomination next to a lake on a dirt road upon which only a masochist would venture with a machine so limited in capability. I gave it my best shot, but we were doomed to hate each other.

Obviously, I didn't rave about the bike's glorious features and that was, apparently, a crime. Even I can only lie so much in 1,200 words. I do apologize for the "uninspiring" quality of the review. The best I could do was to reach for "funny." When I look back at the pictures of myself on the Avitar, I think we both accomplished funny. I still take crap from friends who posted a collection of pictures of me on that damn bike with my feet extended in the gynecologically-correct cruiser position and the rest my body so uncomfortably positioned that vacationing Guantanamo prison guards were taking notes as I rode by.

In the aftermath of this experience, I've been relegated to finding my own bikes for review because MMM is growing gun shy of sales and marketing department backlash. Every once in a while, I feel a tinge of jealousy when the other writers get to play with cool bikes like the BMW F800ST (and I was on the list for that review before the Avitar fiasco) or the 2008 Aprilia Shiver. But I missed out on the H-D FLSTSB Cross Bones and the Can-Am Spyder, so I'm not all that injured.

Successful humans almost always become more conservative and, no matter how you play games with the meaning of that word, that means we become less adventurous, courageous, and less willing to challenge the status quo. Believe it or not, I can remember when FM radio was adventurous. I can even remember when National Public Radio produced radically entertaining and informative programs. Way back in the dark ages of motorcycle publications, Dirt Bike Magazine actually performed shoot-outs that ended up with clear winners and losers. I wonder if Newsweek and Time Magazine had a golden age?

I think the reason so many of us get our news and information from the Internet instead of magazines and newspapers is that the World Wide Web is still largely economically unsuccessful. Until the money starts pouring into blogs and web news sites, there are still ways to get attention on the Web without much financial incentive, so there is nothing to lose in telling the whole, nasty story. Once money creeps into the equation, the story's motivation changes. It's human nature. That doesn't make the occurance any less disappointing, though.

Mostly due to a lack of patience, I'm going to post more product reviews on this blog in the future. I like the fact that I can say exactly what I think here without having to worry about offending whoever I'm likely to offend. It's easy enough to simply not read a blog if you don't like the writer.
Posted by T.W. Day at Saturday, June 28, 2008