Monday I’ve Got Tuesday on My Mind 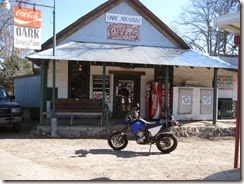 First thing, Monday morning, we hiked up to Byrd’s Store, bought some junk (hot dogs, beer, muffins, and cheese) and paid for our campsite. The young woman running the store, Jenni Jo, turned Robbye on to a nearby horse riding place (Cowboy Up Trail Rides). She left a phone message with them and we walked back to the RV, half-expecting that to be the end of the horse question. About twenty minutes later, Jenni Jo was knocking on our door with information about a ride. The Cowboy Up folks put together a 2 hour trail ride about 30 minutes notice. Robbye told them we’d be there in 15 minutes and came back to the RV with what she thought were directions to the stable.

Consistent to form, Robbye didn’t bother to get or write down actual directions and didn’t admit that to me until we’d ridden about 20 miles in the wrong direction. “They just said, ‘Down the road a ways on the right.’” The upside to that error was that we got to see the “oldest continuously run filling station in the US.” Or something like that. Gas was $4 a gallon. The downside was we’d be 30 minutes late if got there at all.

We got directions (“Go the other way, dumbass.”). Back we went 18 miles in the opposite direction. The wrong way did gets us to some territory we’d have missed seeing otherwise. We backtracked to Byrd’s and Robbye asked for actual directions and wrote them down. On the way, now heading in the opposite direction, we whipped through some great twisty roads with near-mountain pitches and lots of switchbacks with almost no traffic at all. Two-up on a 250cc dirt bike and we averaged about 50mph for the whole trip. Tell me, again, why I can’t get by without a larger motorcycle. Another 18 miles and I dropped Robbye off with the horsey folks (Just outside of St. Paul, AR, I swear.) and went exploring myself. 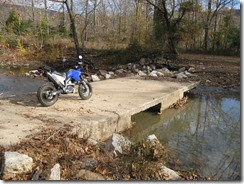 We passed dozens of ATV roads on the way to Cowboy Up and I picked one and dove in. After a couple of rocky stream crossings and about twenty miles of twisty near-single track trail, I was totally lost. When I stopped, I heard a truck passing on what I hoped was a half decent road back to something identifiable. One more stream crossing and a quick stop for a photo op and I found a road. 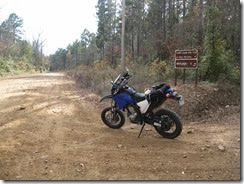 To the left, the road looked less travelled. To the right, more travelled. I went right. For the next five or six miles, I passed hunters and ATV’ers going the opposite direction. I was either heading into wilderness or on the right track. I kept going. The gravel turned to pavement and I felt more confident in my direction. The road dead-ended at Highway 16, I decided to turn left, ended up at a small town I knew was on our way out. In other words, the wrong way. I stopped at a “store,” got some awful coffee, listened to an honest-to-god story about a local guy who was on Jerry Springer that morning (Who knew Jerry Springer was still on television?), got some serious local color (Next time I go ANYWHERE I take the recorder with me.), and read about half of a really awful David Baldacci novel before I decided to cut and run back to get Robbye. 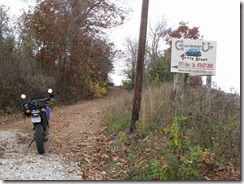 I stopped at the Cowboy Up entrance to take a shot of the road into the stable. You need to own a horse or a mule to get into this place so you can ride their horses. Between the steep grade, the grossly eroded path, and the half-dozen dogs chomping at my heels, it was about all I had to get us up that hill the first time. It was nothing but fun on the way back down by myself. 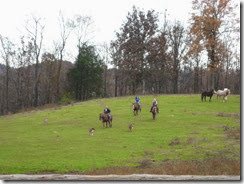 I hung out with the owner, talking about the state of mental health, US healthcare (He and I are equally unimpressed.), the Arkansas economy (“The 2nd poorest state in the nation.”), and the drug and alcohol abuse center he funds with donations and money from Cowboy Up. After a while, I heard Robbye’s laughter and we looked toward the gate across the field. The rest of the horses were running toward them and the three riders and four or five dogs were coming down the hill. Robbye was still laughing and kept at it all the way back to the stable. 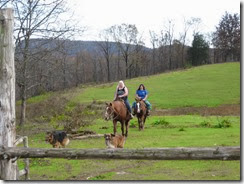 When she arrived, all she could talk about was how much fun she’d had, how much she liked the horse she’d ridden, and how beautiful the ride’s path had been. She said that the only thing that would have made it more perfect would have been if our granddaughter, Astrid, had been along for the horses and the dogs. 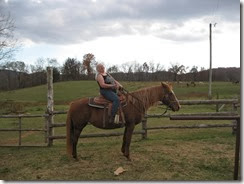 The ride back home was uneventful (always a good thing) except for spectacular views, a perfectly laid-out and well-maintained twisty road, no traffic, and a few animal sightings. There are a lot of things to like about this corner of Arkansas. We have bookmarked all of these places for our return trip in March or April.

So far we’ve had a couple of mediocre days out of almost two weeks on the road. Pretty good odds for old people in any situation. All three of our campsites have been terrific and they have all been radically different. We’re looking forward to even more variety as we head south and west.The weather report is driving us out of the Arkansas hills. It’s supposed to be 20F tomorrow night and we’re hoping to be south of the seriously cold weather before we have to test our system that severely. We need to be at a Lake Texoma campsite by Friday, so tomorrow’s “hit the road day.”