One Man (Cat) Down 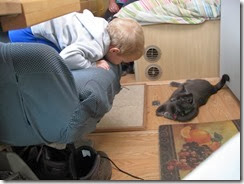 We’re about to leave Lake Texoma and one of us is not going to be on the rest of the trip. Our seven year-old cat, Spike, decided he’d had enough of travel and ran off this morning (Tuesday). He’d slipped out yesterday, but came back when I called him. Today, he must have kept moving until he was out of ear-shot.

I want to go on record here as being someone who is totally cat-neutral. In my 46 years of marriage, we’ve probably had two dozen cats and I’ve liked exactly two of them.  Spike was one of those two. He and I had a bond, unlike any other animal I’ve ever known. Ever since he was a kitten, when I’d pick him up he’d give me a head bump. Almost a kiss. Every time, no matter what the situation. 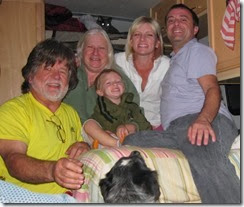 We spent most of the day with my daughter’s family. End of the day, we all piled into the RV for conversation and popcorn. You can see Spike right over Robbye’s head on the shelf; two glowing eyes and an near-invisible grey body. Robbye always claimed he was a “Russian Blue,” whatever that is. He was Spike, my cat. There never was a cat like him and there never will be again. I hope he’s safe, but I suspect he discovered coyotes are less than friendly. 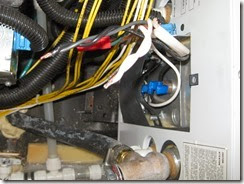 I spent a good part of Tuesday troubleshooting our hot water system. Turned the characters at Winnabooboo screwed up the wiring at the factory. I took a picture of the wiring rat’s nest before I rewired it. If you look at this picture closely, you’ll see that the white solid wire is not contacting the white stranded wire. It never did and the heater had never worked from the factory. It does now.

Sorry to hear about Spike. He was fortunate to have you in his life these past seven years. You're a good man.

Poor kitteh. I don't know what would be worse for him - the coyotes or being sad and alone out there.

I am sad for you both.