I suspect the title of this entry tells more than I want to say. I hope. Some good plans are doomed from the start and a traveler might as well punch a hole in his own boat as try to avoid catastrophe. Saturday night was that kind of disaster.

My plan was to escape from Springfield Saturday morning with the threat of the country club wine-and-dine torture hanging over our heads; at least, my head, To me, that seemed like the only rational plan. However, Robbye brought a collection of “nice dresses” and felt compelled to wear them and, therefore, she wanted to go to the party. Party’s have been dismal affairs all of my life and this one had all the earmarks of a record-breaking event. The only time I’m comfortable at a party is when I’m in the band or cooking food. Otherwise, I’d rather schedule an emergency dentist appointment and have all of my molars removed. I did not understand the “nice dresses must be worn” explanation. I carry bandages in the RV (and in my bike’s emergency kit, too), but I don’t feel compelled to use them just because they are there. The same goes for my tire patch kit, aspirin, bullets, and the spare tire. Of course, I didn’t pack any nice dresses for myself or, even, a shirt with a collar. I had high hopes for this trip.

In the end, it all came to tears and we’re back on the road again with our tails between our legs and my skepticism on high alert and negativity in harmony with our surroundings. I suppose it’s worth an occasional reminder of why I like to keep as much distance as possible from anything resembling 1%’ers. You meet a better class of people in a food bank line, every time.

So, we drug ourselves out of bed at 6:30AM and hit the road as quietly as possible. No point in waking up any sleeping dragons.

We were a long ways from ready to anywhere. Out of food, low on fuel, almost out of propane, coach batteries nearly drained (because the house breaker or outlet tripped during the night), and the cat box was overly decorated. We made three stops in Branson and were ready to say goodbye to Missouri. Without a real direction except “away,” I aimed south on US 65. We meandered for a while and discovered all sorts of roads that are totally inappropriate for a small-engine RV. Arkansas is surprisingly hilly; go figure. 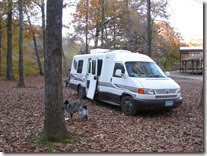 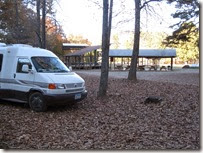 220 cranky miles later, we tripped over an amazing campsite, Byrd’s Adventure Center near Ozark, Arkansas. This is , apparently, the largest privately owned campground in Arkansas. It is also the most friendly place I’ve been in years. One of the park’s owners,Chris, and I talked, for a while, about how long it takes to get the smell of rich people out of your system and I felt better afterward.

Byrd’s is for everyone; campers (tent, RV, and cabin), dirt bikers, ATV’ers, hunters, and beer drinkers. Every once in a while, our silence is broken when a bike or ATV rolls up to the showers. By 8PM, the level of activity is down to the sounds of frogs, crickets, and tinnitus. 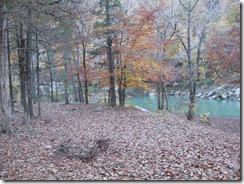 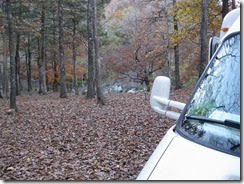 Once we stopped, we let Gypsy run around untethered for a while, until she showed signs of going wild on us, and setup our screen tent, made dinner, and tried to settle down. It wasn’t easy. We were snapping and snarling at each other for at least 100 uncomfortable, unstoppable miles in the Arkansas hills. (I was surprised to learn that Chris had never heard Arkansas pronounced “Ar-can-sus.” He didn’t even think it was funny.) Robbye and I took turns standing on the bank of this beautiful river, letting the intended spirit of our trip return. The Mulberry River is so laden with metals—manganese, copper, and sulfur mixed together to make a powerful assortment of water-hardeners--that it is practically turquoise opaque.

The sun goes down, hard, at 5:30PM here. I mean, light to dark in 60 seconds flat. With the Mulberry River in the background and the nearest road at least a mile from our campsite, this is a nearly perfectly natural sounding location at night. We could have camped almost anywhere. The Byrd’s campground is a nearly-random assortment of hookups and campsite tags. With leaves a foot deep on the ground, if there is a road to follow, I couldn’t find it. We just wandered around until we found a spot with 120VAC and a reasonable proximity to the river and the showers, not necessarily in that order. 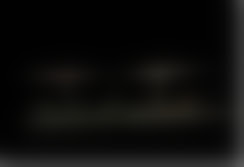 There is a small and a large stage fifty yards from our site and a picnic table area that remains lighted to mark the bathrooms and showers. IT’s almost surrealistic

So far, the good has outweighed the bad by large numbers. The Mark Twain State Park, Saint Louis’ City Park, Art Museum, Zoo, and the city’s art, architecture, and history (and our wonderful friends who shared their city generously with us), Bennett Springs, and, now, we will ensconced (Yes, El Wappo, I do know what that word means. I just use it carelessly.) in a beautiful area that will be our home for at least a couple of days.

We will be somewhere near Lake Texoma by Friday, but that is about 250 miles away. We’re in no hurry to leave or be anywhere. Tuesday is supposed to be cold, a high of 40F during the day and as low as 20F that night. We’ll decide what we want to do about that Monday.

Well at lest you found a nice place to camp after your daring escape.

The best way to avoid wearing "nice dresses" is to not own any. That is how I get out of it. I think I am a tomboy at heart and hate crowds of people, especially rich uppity ones.

You and I would have been together, downing some kind of alcohol by the gallon, to avoid listening to the "rich uppity" characters at that party. We are so far from that place today that it finally seems funny.

great place at Byrds , we fly our powered parachute there!
Valerie