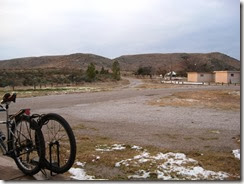 Today, Monday, was a better day. The sun was out early and a lot of the ice and snow melted off before noon. The park, Carlsbad Cavern, was open for business at 11AM and we got ready to go a good hour before the road was opened for travel. The plan was Robbye and I would ride the bike to the park entrance and meet our neighbors, Christine and Whitney there. The women, apparently, discussed the wisdom of riding a motorcycle in 40F temperatures with possible ice or snow on the road and decided Robbye would ride with them in their Toyota pickup. Worked for me. I had an open field with no extra bodies to worry about and a twisty mountain road to play on. I made it to the park, 7 miles, stowed my gear, got in line for tickets, and was pretty much settled into waiting for my place when the women arrived.

Of course, nothing really goes that smoothly when I’m in the driver’s seat. The trailer was covered in about 2” of ice when I started unloading the bike. The bicycles were frozen in place and I was barely able to get my rat bike loose enough to slip the WR past. Like the goober I am, I tried unloading the bike the usual way and about 1/4 of the way into the process, I slipped on the ice and dropped the bike over the side. Robbye’s bicycle took a hit (which broke it loose from the ice) and I pretty much did a half-gainer off of the trailer behind the bike. After some mild cursing and self-deprecating motivational talk, I tried pushing the bike back up on the sidestand to start over. Whitney, our young and hyperactive neighbor ran over and practically ripped the bike out of my hands and pulled it upright. Have I mentioned that I really dislike being an old, weak-assed, wussy of a geezer? Well, I do. This no-more-than-125-pound young lady can probably press me like a 20 pound dumbbell. Just when you think you’re too old to be doing something, some damn kid comes along and proves you right. 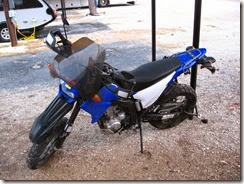 The ride up and back went nicely and it was beyond good to be piloting a vehicle that is not curve-disabled. Seriously. When the highway “designers” mark a curve for some idiotically slow speed, they are talking to me in the RV. On the WR, “slow for curves” means wick it up and have some fun. I do love this motorcycle. I would like to have some way to protect it while we’re travelling, but so far no clue.