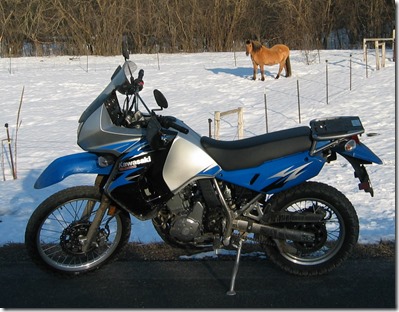 Sev dropped the KLR off the day after a mid-March snow storm when I was recovering from a bout with flu and bronchitis. However, the next day was sunny and the weather was predicted to slither above freezing by noon. I had a downed maple in the driveway waiting to be to cut into firewood, the last bits of kitchen remodeling to finish, and income taxes still unpaid. There was snow on the ground, ice on the roads, and flim in my sinuses as I set off to test ride the shiny new "Blue 21" KLR650 (Candy Lime Green & Sunbeam Red are available, too).

From two winters of V-Strom fuel injection experience, I had almost forgotten about the routines for getting a carbureted  bike going on a cold morning. The first morning with the KLR, it was 29oF outside and 26oF in my garage. So, after a minute or so of cranking the starter and working the throttle, the KLR burped a few times and struggled into dependable ignition. I suspect the new leaner, meaner EPA emissions rules have something to do with this. KLRs aren't known for cold weather starting problems.

Kawi redesigned the frame and swingarm, bumped the fork up to 41mm, and installed a new shock. Rear suspension travel was reduced 0.8" (to 7.3”) and front travel reduced 1.2” (to 7.9”) resulting in an 8.3” ground clearance. While the seat height is slightly lower than the older KLRs, the suspension sag is considerably less (about an inch with my 220 suited-up pounds), resulting in about the same loaded seat height. The new, firmer seat is a comfort improvement, but also adds a little seated seat height. I was on my toes on the 2002 KLR and I was in the same situation on the 2008 KLR. This could be "fixed", but you'd be changing the bike's geometry, modifying the kickstand, giving up suspension travel, and lowering your ground clearance. Personally, I think is a bike for folks with 32-inch-and-up inseams and the rest of us should just be jealous. I am unconvinced that garage monkey engineering skills are up to the challenge of redesigning a modern motorcycle.

Speaking of the kickstand, it's been beefed up in the 2008 bike, including a much larger foot. I think it stands the bike up a little too straight. If you try to park the bike anywhere but on a flat spot, you'll discover the kickstand wants to push the bike over as you dismount. On the other hand, that stable prop temps you to mount up from the advantage of the left foot peg. I'm not a big fan of abusing the frame in that manner, but lots of short KLR owners have been doing it for 20 years.

Sev delivered the KLR with all 6.1 gallons of fuel in the tank and that means 37.5 pounds of fuel are balanced on top of the bike's 386 pound dry weight. If the KLR starts to tip over, you better be ready to leverage about 200 pounds upright and be solidly planted while you do it. At least once, luck and financial incentive were all that kept me from dropping the bike. Once, I managed to coat the kickstand with a layer of ice and spent fifteen minutes whacking at the stand, trying to break it free while balancing the bike on my right foot's big toe. That pointed out the two major defects in the 2008 KLR (and its ancestors): 1) I'm too short for this bike and 2) I need more upper body strength if I want to ride a KLR. 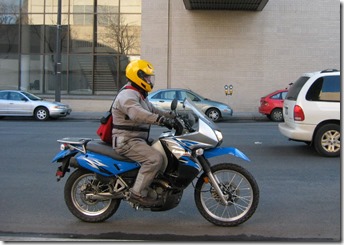 My first morning on the KLR, I worked my way out on residential roads, farm 2-lanes, and 60 miles of frozen dirt roads. The stiffer suspension has changed the highway feel of the KLR. Gone is the infamous rocking horse lope, but my first impression was that the ride appeared to be a little stiff for rough roads. I took a pounding on a farm road textured with truck ripples. On broken up, hard-frozen dirt roads, the suspension came into its own. The quicker I passed over the rough stuff, the less I noticed it. Overall, I think the new suspension is a major improvement. The more I rode the bike, the more I trusted it.

Our test bike was not yet broken in, with 80 miles on the odometer delivered to my garage, so I tried to take it easy and vary the speed and engine load. Keeping the bike slightly loaded, at least a gear above max power transfer, provided an additional layer of stability and security on sketchy road surfaces. The engine has been updated for improved high-rpm performance, greater low-end torque, cooler operation, and reduced oil consumption. The temperature gauge barely budged away from dead cold for 120 miles. The bike pulls strongly from 2,000 rpm up and is dependable, if not muscular, between 1,000 rpm and 2k. When the terrain and traction is less than ideal, this quiet motor is really something to appreciate. On a slippery road, shift up a gear and let all that torque smoothly pull you out of trouble (or through an ice covered corner). In deep sand you can stick with the mid-range rpm and power your way around corners, steering with the back wheel.

Shifting is a lot like the old KLR. You can find neutral, occasionally, between any gear. You have to be firm about gear changes, but the clutch and transmission are solid feeling and dependable. The 5-speed transmission is fairly wide ratio, but I think a lower 1st gear would be a big off-road improvement. In first, you are moving at about 20mph when the motor begins to really pull. Experienced KLR riders warn that the front wheel won't lift without a lot of clutch and throttle work. In fifth gear, 5,000 rpm equals a speedo-indicated 75mph and the bike still has useful power still available at that speed. Since redline is around 7,500 rpm, you aren't going to put a sportbike pass on high speed freeway traffic.

The new 280mm single-petal front discs and 240mm twin-piston rear caliper brakes are excellent. The front brake hauls the bike to a controlled and quick stop with a couple of fingers. The rear brake will break the back tire loose with moderate pressure, on asphalt or dirt. With a combination of throttle and rear brake, you can easily steer the KLR on loose terrain with minimal handlebar input.

The rubber footpegs do not belong on a dirt bike, although they might provide vibration protection. A little ice on the soles of your boots and standing up is a risky adventure. Several vendors sell serrated pegs and I think they'd be a necessary modification.

Inside the new frame-mounted cockpit, the instrument panel gauges are updated and have lost no useful functions. The fairing is sportbike-style plastic and the fenders are still dirtbike plastic. The fairing is large, keeps wind and rain from most of your upper body, and provides some shielding for your legs. The hand guards provided terrific protection from the cold.  The new, dual-bulb headlights light up the road efficiently. The KLR finally gets a push-to-cancel turn signal switch and the signal lights are higher and more visible.

For all of the 40+ things changed on the 2008 KLR, the price is only up $150 ($5,349) from 2007. Kawasaki's KLR accessories include saddlebags, expandable tank and tail rack bags, a taller and wider windshield (on our test bike), a gel seat, a center stand and heated grips. From the aftermarket guys, you can buy upgrades and farkles galore. The stock warranty is 12 months and you can add 12 month increments of Good Times™ Protection up to 4 years.

I took on a couple of steep snow, ice, and slime coated hills and the KLR climbed them without a moment of lost traction. I would have turned around and backtracked to an easier path on my V-Strom. When it comes to off-road capability, think of the V-Strom and everybody else as a Cadillac Escalade and the KLR as a Jeep Wrangler and you'll have an idea why the KLR has so many long-term fans.