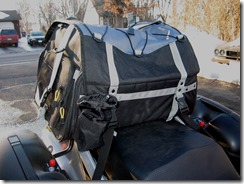 I snagged this bag late in 2006, moments after the riding season ended. On a trip to Duluth and a visit to Aerostich RiderWearhouse. I had some assistance in picking out a seat bag that I should have listened to more closely. Andy Goldfine, the wizard behind all things Aerostich, showed me a collection of seat bags and suggested, several times, that I might want to consider a bag that was more waterproof than the MotoFizz bags. I, however, kept bringing him back to the strongest selling point of the MotoFizz bag; "this one has a coffee thermos holder." After trying to convince me that I didn't need the large bag, but would find the small or medium MotoFizz bags held more than enough gear, Andy gave up and acknowledged the incredible value (to me) of a cup holder on a motorcycle and let me use my own lame judgment to choose my seat bag.

After this introduction, I'm sure you can guess what the major fault in the MotoFizz bag turned out to be; it isn't waterproof. I also found that after cinching the bag down tight, I could have easily made do with the medium bag or, probably, the small bag. Even worse, I couldn't find a way to mount the bag where the coffee thermos holder didn't co-function either as a really scary butt-plug (see the fully loaded photo) or a thermos ejection device. I left the thermos home for the trip. The small or medium bag would have carried the thermos holder in a less exciting position, since it's mounted on the side of those bags. 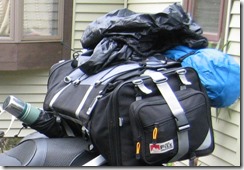 The major fault in this product is the lack of waterproof-ness and the bag's rain cover. The rain cover doesn’t work at all. It’s an over-simplified design that is destined to let your gear get drenched from top to bottom. The rain cover is “secured” with a lightweight shock cord, instead of a more rational and traditional drawstring. A little wind, a few miles, and the shock cord stretches, comes apart, the bag flies away like an aimless parachute, and the MotoFizz is converted to a seat-mounted nylon swimming pool. After seven days of experiencing wet clothes, wet camping gear, and wet everything else, I relegated this bag to the simple task of holding waterproof gear. I made it about 3,000 miles into Canada before I tired of rescuing what was left of the rain cover and decided to try re-engineering it. The shock cord had popped like cotton string; first near the cord clamp and, later, where the cover was held in place by security straps. At a motel, I repaired the cover with a piece of 1/8" nylon cord which worked pretty well, but not well enough to trust the bag to things I wanted kept dry. RiderWearhouse stocks the rain cover, separately, because they are so easily lost.

The lack of waterproofing was disappointing because, as I might have mentioned, the MotoFizz has a coffee thermos holder. The MotoFizz bag is a well-designed, spacious bag that can be secured to practically any platform. Cinched down, the MotoFizz is incredibly stable wherever you position it on your bike. It is built to outlast you and your motorcycle, comes in three sizes (small, medium, and humongous), and is flexible and expandable to meet a variety of load conditions. My "large" bag is capable of storing most of a deer's carcass and the tools to butcher the deer, although it would leak blood all over my bike. 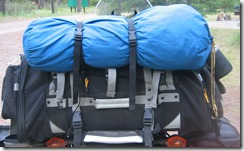 The bag is edged by heavy duty zippers and made of heavy duty (water-resistant, but not waterproof) Cordura nylon. The bag's compression system is clever and practical. Once you get your gear into the bag, you can start tightening the straps down until you’ve reduced the size and stabilized your load. The small accessory storage bags (only on the large bag) are useful, but they aren’t water resistant.. They are anchored to the main bag with the side cinches, so they don't flap in the wind or work loose from their buckles. There are at least five different anchor points for tying down external gear (tents, sleeping pad, etc) and MotoFizz has included a lightweight elastic net for securing a towel or wet clothing. Every piece of hardware on the MotoFizz bag is well designed, if not over-designed, for intense touring. There are lots of good things to say about this bag, if only it kept out the rain. I recommend you consider the small or medium sized bags over the large bag. 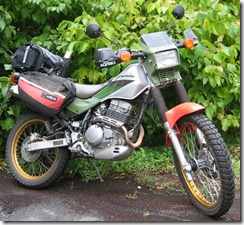 I reviewed the MotoFizz large bag in 2007. Mostly, I liked it. However, I had complaints about the waterproof-ness (lack of) of the bag and the kinky position of the all-important coffee thermos holder. When I got back from Alaska that year, I gave up on making the large MotoFizz bag work and replaced it with a hard tailcase. A friend now has my large bag permanently mounted on his 1992 Yamaha 850 TDM and loves it. Every time I see it, I suspect I made a mistake. It looks much neater on his bike than it did on mine. Of course, he isn't stuffing a month's worth of camping gear, clothing, and food into the bag.

Last summer, when I needed to find a camping tailbag for my 250 Super Sherpa, there was no contest. I bought a small Motofizz bag and found that everything I liked about the large bag was there in the small size, plus the rain cover worked much better on the smaller bag and it has two all-important thermos holders which are mounted on the side of the bag where they do not do double-duty as a butt plug. 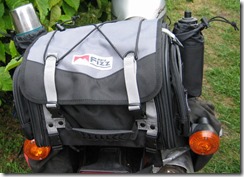 Note to Mr. Subjective: When a less-than-brilliant customer is overcome by the thought of having readily available access to coffee, suggest the two smaller bags because they will hold twice as much caffeine. You probably did that and I ignored your sage advice, right?

The small Motofizz bag, like the medium and large, is constructed to withstand a hurricane and sticks to the bike as if it were designed for it. The multitude of zippered storage pouches, plus the plethora of tie-down loops, makes the bag perfect for securing enough gear for a several day outing. Motofizz, apparently, listens to complaints because they replaced the silly elastic shock cord on the raincover with a much more secure nylon cord and are now using a much heavier material.

The small Motofizz, plus moderate-sized saddlebags, is a terrific minimalist touring rig. I'm going to put it to a real test this summer when I tour North Dakota on the 250. [Since I’ve used this bag on a daily commuter basis for four years, I think it’s passed the “real test.” For camping, touring, or just as a large daybag, the small MotoFizz is hard to beat. It would be nice if it was waterproof, but it’s not.]