First Day on the Road

Unfortunately, there is no motorcycle content in this blog entry. I wish there were, but the first stage of Winter Escape 2013 has been all about four (or six) wheels.

Wednesday was the day I’d been planning for all summer. In May, I hopped a plane for Oregon, bought a used RV, drove it home, and spent too much of the summer of 2013 getting the RV ready to drive across the southwest with a wife, cat, dog, dirt bike, and enough stuff to keep two hyperactive seniors interested and non-homicidal for 4-5 months. I’ve done everything I could think of to be ready to do this trip, now we’re doing it. Once we were rolling, I thought of at least a dozen things I should have done. Some of which I can do when weather permits, some of which might end up costing me a small fortune on the road.  The “best laid plans” and all of that.

After working all summer toward our orderly exit, we abandoned ship Wednesday and hit the road. A friend decided, last minute, to hold up in our place for a few months while he looks for work and tries to sort out his financial mess. A week of that and I decided we should get out of the place before he and my wife clashed hard enough to bring out weapons. We have done our time as parents and neither of us are interested in adopting a 55-year-old anything. I quit teaching because my patience for adolescence has expired. Other than my own daughters and grandchildren, I have no more interest in the survival of the human species than do alligators and cockroaches. I have no capacity for worrying about how V, X, Y, or Z-Gen “children” will survive the world economy without having to learn how to do something useful. Most of them have not worked hard enough to deserve survival and nature is pretty ruthless about dealing with sloth and arrogance. I would like to be more of a humanist, but it’s not in me. For example, when I watch a few moments of “Two and A Half Men” with my wife (inexplicably, one of her favorite shows along with “The Walking Dead”), a few seconds of Allan Harper and I want to see that lame bastard dead, skinned, and fed to pigs. There is no crime that could be committed against that asshole that I would object to. 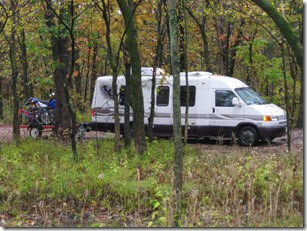 The upside to our slightly premature departure was at the end of the first day. The trip plan has been to drive south to get below the frost line. Originally, we’d planned to limit ourselves to 200 miles a day, but it was raining like a Florida hurricane when we passed Iowa City, So, we kept going. 400+ miles later, we ended up in the Mark Twain State Park for our first night. The luxury bits of the park--the shower, laundry, and bathrooms—close November 1. We arrived October 30 and left the morning of November 1. 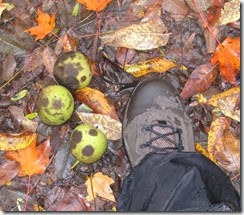 Wednesday night, after getting setup and ready to enjoy a great campground, the same damn rainstorm landed in Missouri. I guess it was here before we arrived, too, and we’d just lucked into a brief calm between storms. Other than the lack of wind, our first night in the RV was a lot like sleeping in a boat on the ocean. It rained all night and, occasionally, the constant noise of the rain on the roof was punctuated by huge acorns dropping from the trees overhead. Missouri-sized acorns (about the size of Minnesota walnuts) falling from 30 feet sounded like someone throwing rocks at the RV. Two campsites over, there were hundreds of Missouri walnuts on the ground, about the size of tennis balls. It could have been worse. About 2AM, something with a little mass jumped on the trailer, rocking the RV enough to wake me up. I shined a light on the bike and trailer, but there was nothing to see. I’m a light sleeper, normally, with the occasional crack of acorns hitting fiberglass, I slept like a soldier; practically with one eye open. 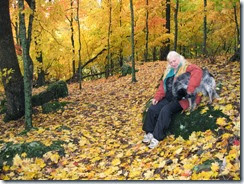 We woke up with the sun, took the dog for a wet walk, and made breakfast about 10AM. There are two other campers here, one is the camp “host” and the other a couple who are planning to stay a few days after the civilized facilities shut down. We're going to stay another day here and there are no services in the campground, beginning tomorrow morning, November 1. By 11AM, it was back to monsoon weather and we’re socked into the RV for a while. If it quits raining, we’ll unload the WR and take a ride into Hannibal to see the Mark Twain stuff. If it doesn’t, we’ll loaf for the day and drive to see the city’s museums tomorrow. This blog entry probably won't go out for a day or two, after we’ve landed in St. Louis.

Well that was an adventurous first night in the RV. Hope nights 2 and 3 were a little calmer. If not, we get to see what sleep deprivation does to you.

Even with a little lack of sleep just think of the fun you two will have on your trip.

I am looking forward to hearing about it.