Payback Is A Bitch 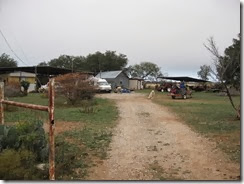 After a fairly long haul, on Wednesday, from Lake Texoma to a few miles south of Brownwood, Texas (the home of Duane and Millie Schwab, Duane is the US resident expert-of-all-things-Winnebago Rialta), I pulled into Duane’s drive after dark and I’m notorious for being a near-blind night driver (Don’t ask why my wife insists that I drive at night.). After getting us situated for the night, Duane and I talked Rialta stuff until late and called it a night.

Yesterday, Thursday, was an incredibly nice day. We spent the day fooling with my RV and Robbye played with horses, chickens, dogs, and goats all afternoon. It was a shorts and shirtsleeves day and we pretty much wallowed in a low-80s Texas winter afternoon. Thursday night, Millie fixed us an incredible meal and we went to bed stuffed and feeling pretty good about the day. The wind was picking up as the evening went on and by the time we buttoned up the RV it was cool (mid-40s) and blustery. The RV rocked like a ship through the night and I slept like a dead man. Robbye was, apparently, anxious.

Duane helped me troubleshoot some more wiring issues (all Winnebooboo screw-ups) including the electric door wiring and the cab lights. It’s going to take some time to figure out all of the dumb things Winnebooboo did, but I figure I’ll have it all working by the time I sell this damn thing. Nobody should ever buy anything designed, built, or even conceived of in Iowa. What a bunch of maroons. 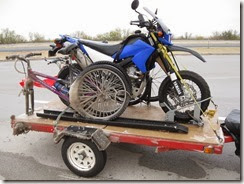 It was drizzling a little when we got up and we hooked up the trailer and got on the road before 8AM. Duane came out to see us off, but he was ready to go back inside and enjoy his heating system after a minute or two. A few miles down the road, I wished I’d have followed him. The road turned icy after about 20 miles northwest of Brownwood and got worse the further we went. I’m not sure there was a good direction to travel because it was 20F in El Paso. 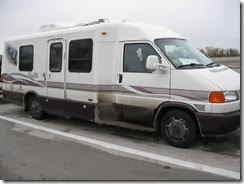 We high-tailed it to Carlsbad, New Mexico, hoping for better weather. No such luck. It’s going to be 25F here tonight. I bought an auxiliary ceramic heater from the local Wal-Mart and it lasted less than a minute before it fried itself. Typical shit from Wal-Mart. I have to hope the water system survives the night, but who knows? It’s not designed for several sub-freezing days.

Tucson, Arizona, one of our destination targets is 53F right now, as I am writing this huddled in the RV hoping the propane holds out for the night. This is not what we signed up for. In fact, this is fucked. We have friends we’d hoped to see in New Mexico, but I’m not that thrilled with hanging around for two more 25F nights. It’s supposed to warm up to the mid-60’s, but we might not be interested in waiting that long. 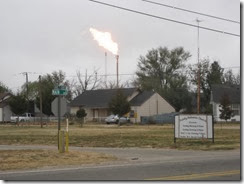 West Texas and southeastern New Mexico is fracking hell. The place reeks of oil and sulfur. It is very much like a cold hell. I recorded a little of this scene and I might post it on YouTube when we get to a semi-quick Wi-Fi connection. I can not imagine making enough money to stand living near this flaming smoke stack. This is the process of burning off, as waste, natural gas that is on top of the oil. If there is anything more wasteful in human activity, I don’t need to know about it.