Iced in in Carlsbad 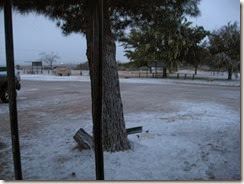 Today, Saturday, was more of an adventure than I need to experience at any time in my past or future. We spent last night in a semi-grubby RV campground (using that term grossly and loosely) on the edge of Carlsbad, New Mexico. New Mexico is Halliburton territory. So much so that the Carlsbad Cavern restaurant we ate dinner at tonight was closed down early so a Halliburton crew could eat in privacy. Dick Cheney’s legacy lives on and other terrible catastrophes, too. The campground was mostly an oil worker haunt and the general theme was “chick shabby.” There was a swimming pool, but it smelled so strongly of chlorine that I chickened out. The showers were pretty smelly, too.

Robbye was unimpressed and insisted that we check out the Whites City campground. We did and I was unimpressed, although she thought it looked pretty good. I checked us in and as I was finishing up the paperwork, the guy at the counter mentioned the park probably wouldn’t be open tomorrow or, even, Monday. “Say what?” The park had been closed for the last two days due to ice on the trails and stairs. So, we undid the paperwork and I decided to make a run for Guadalupe Mountain National Park.

The first 20 miles were on New Mexico highway and weren’t too bad. About the time we passed into Texas, the rain turned to sleet and the road got a lot slicker. When we arrived at the park, I was informed that they had RV spaces, but no services. It will be a good bit under freezing tonight and I’d have to run the generator all night to keep the RV warm enough to keep from freezing the water supply; let alone us. I asked about the next park south, a Texas state park, and the ranger said it was RV-friendly, but the roads were much worse to the south and there was some talk of closing it for the rest of the day. So, back to Carlsbad we turned.

That drive was a class-A bitch. The storm had caught us and the miserably designed Texas highways all pool in the wheel tracks and hydroplaning is a constant problem. Freeze those pools and the roads are flat out nasty. A few more miles and the sleet turned to inch thick ice and our pace slowed from 60mph to less than 40mph. Semis were passing us at the speed limit, sliding across the road like fat cells on glass. I expected to see them in the ditches later and some didn’t disappoint me. Once we were back in New Mexico the roads improved dramatically and the sleet slowly turned back to rain. We made it back to Whites City in time to check in, settle down, rig up the RV at the site, grab some dinner, and get back to our rolling house before the storm hit the park. We’re going to be here for a few days, waiting out the storm, and hoping to get to visit Carlsbad Caverns.

If your journey takes you to the Monterey Bay Area in California, my wife and I would love to treat you and Robbye to dinner in Monterey or Santa Cruz. Of course you'd be more than welcome to stay at our home in Scotts Valley. Vicky and I have enjoyed your blog for the past few years and it would be our pleasure to have you as our guests!

That sounds like a wild ride. So much for finding warmer weather. Hope the storm doesn't last too long.

Randy,
The plan is (if we ever get out of New Mexico) to head west to SoCal and, after I dig a couple dozen postholes for a friend's farm, we'll be taking the coast road north. It would be fun to meet you and your wife and to get some inside info on your area. You've got my email here on the blog, so let's stay in touch.