Who Wears What on Their Head?

I know, stereotyping people is politically incorrect and the people who most hate political correctness seem to scream the loudest for it when their ox gets gored. Helmets, being the personal and fashion statement that they are are prime candidates for an exercise in profiling. Being the crotchety old bastard that I am, I can't resist the opportunity.


My first and most consistent observation about helmets is, "Those who need it the most object the most strongly." 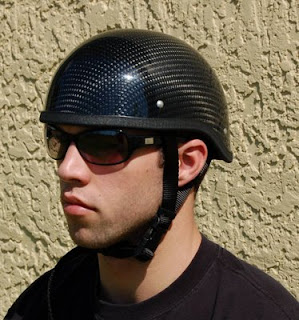 In a typical basic motorcycle training class, "students" are supposed to show up with their own, DOT-approved helmet. Anything with "DOT' stamped on the back will suffice and the DOT will stamp any damn thing. I have no idea what criteria the DOT uses for coverage, but I suspect the top of the head is all they bother to protect. If a very soft space rock were to fall from the sky and land on top of the owner of one of these sad jokes, it might protect him/her. If the same sad jokester were to flip from his motorcycle, landing on top of his head, skidding to a stop while still balanced on top of his head, this helmet might provide sufficient protection. In any real crash, you might as well be wearing a plastic beanie. Want to take a guess what kind of prospective "motorcyclist" (other than Carrot Top) wears this kind of comedy paraphrenalia?
I'll save you the effort. The owner of this comedy prop is usually 50+ years old, 150 pounds overweight, as uncoordinated and physically incapacitated as South Park's Timmy and missing a mental connection or eleven million. If it's true that a crash is 49% likely to result in a faceplant this kind of helmet is all but worthless. Every once in a while, someone looking just like the dude in the picture makes an appearance. He's always totally confident of his riding ability and is only in class because he can't get his hippobike through the DMV's course. Remember him? 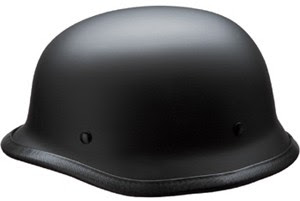 Dropping the bar to ludicrous, we have the Nazi bowl fans. Even dumber, some of the clowns piss on patriotism by putting an American flat sticker on their facist totem. If my father were 40 years younger, I'd like to introduce these clowns to someone who sacrificed a good bit of himself to stomp out this symbol and the evil it represents. As it is, I make it a point to remind them of who they are celebrating and my best guess why and let them babble their excuses for worshing evil. Honestly, I'd rather these characters didn't take a training course because Darwin ought to have a clear shot at them. Enough said. 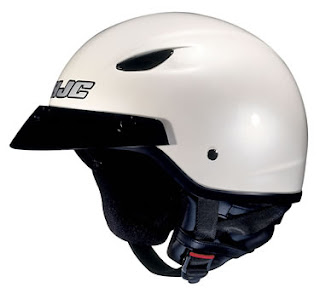 It's hard to say anything seriously bad about a half-helmet. We've probably all owned one, especially those of us over 40. They've probably saved our asses and brains a few times, if we've put any miles on at all. They are protection and they protect some of the most vunerable areas. If claustrophobia is your problem, this is the helmet for you. There are some really good half-helmets and they provide most of the protection that you need.


Lots of BRC students show up in a half-helmet and many of them are ready to be convinced that a real helmet would be a better bet against injury. In the classroom, I always offer bo smash my face (while encased in my helmet) against a table while a student does the same wearing their toilet bowl or half-helmet. Nobody takes me up on it, though. I'm not kidding, I'm up for it if you are. 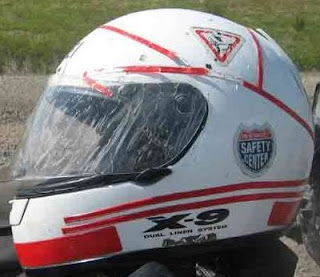 Of course a "real helmet" is a full-face helmet. Anything less is a compromise. Flip-ups included, since the hinge is a clear weak-link. A full-face helmet provides all the protection a helmet can give. racers wear nothing less. Today, even trials riders are wearing full-face hats. Mine saved my face from being ground into hamburger on the Dempster Highway two years ago and I will always remember the look of that fiberglass ground down to where bits of foam was showing through the shell. That could have been bone.

A few years back, a friend's boyfriend bragged that everything about a helmet prevented him from being a safe rider. A few weeks later, he parked his face on the freeway at 40mph and is still undergoing reconstruction surgery. I'll put my opinion and experience against his any day.

Thank you for writing what I've been thinking as an enthusiast. I've read most of your columns over the years and enjoyed them a lot, often laughing out loud. They provide important perspective and counterweight to the endless hype in the motorcycle business community.

I have two friends (one in his 20's, the other in his 40's) who are talking about getting a bike. My counsel to both is the same: Take the rider course at the local community college, and start out with a small bike until all your reactions and responses are well-established. I started with a mini-bike that I built myself with a 2.5 HP Briggs & Stratton, a true relic of the industrial revolution. >From there it was a Jawa 125 (7 HP), then a 305 Super Hawk, then a Honda 350. After a year with a Suzuki Water Buffalo 750 triple (smoked like hell, had frightening high-speed wobble), I got a Honda 500 Silver Wing. All interesting machines, but with serious oversights and design compromises.

My current ride, the BMW K75, is heavy enough at 500 lbs, and powerful enough at 70+ HP, to satisfy my desires for speed, smoothness, and power.

Superb post! Here in Scotland a full face helmet is the only thing that you see, and I have never seen a skull cap or Nazi bowl. Then again, there aren't many choppers.