The Best Laid Plans (and mine) 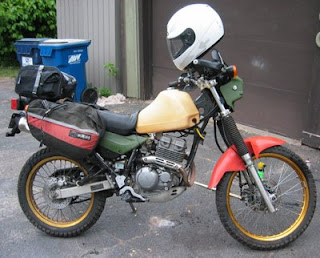 Last Friday, I was feeling confident. I'm a week away from the coolest LD trip I've ever taken and I have everything lined up and set to go. I'm going to explore the backroads, ghost towns, and out-of-the-way places of North Dakota. I've been looking forward to this trip for a year, maybe two. I've installed new everything-that-matters on my 2000 Kawasaki KL250 Super Sherpa (chain and sprockets, tires, brakes, changed the fluids everywhere, rebuilt the rear shock, checked and tightened every bolt, fastener, and clamp). I built a custom touring seat, installed a larger off-road tank, wired up a GPS, sorted out luggage and camping gear, and installed a tweeky-cool headlight. When all that was reassembled, I thought the little bike was ready for a 400 mile shake-down cruise to Duluth.

The North Dakota ride was supposed to be a point of honor demonstration that a little bike can do big things. My route sheet lines out 2500 miles of dirt roads, limited access trails, and tractor ruts, along with a few hundred miles of two lane pavement. After checking everything twice, I fired up the Sherpa to check my new brakes and made it about 5' before the countershaft seal let go, dumping the engine oil out practically instantly. Nobody local had any parts for the Sherpa, so I ordered the seal and other bits on-line. Kawasaki didn't have the parts nationally, so it took all of the week for the seal to arrive. In the meantime, an internet Sherpa expert suggested that I should have replaced the o-ring, too. All I could do was hope he was wrong, since that advice came too late for the parts order.

In the meantime, I started to get my Suzuki V-Strom prepared for a modified version of the trip. No nearly as much dirt, no tractor rut trails, and a way pared down version of the original plan, mostly on two-lane roads.

Two days before the takeoff date, the parts arrive. The seal retention design leaves a lot to be desired. In fact, there is no retention design, other than slipping the seal into the seat and hoping it stays. I'm less than impressed. I install the seal and go for a bicycle ride with my dog, while the Permatex cures.

About three blocks from home, I turn left and the dog goes right and stops and I end up on the asphalt with a two-max-sized bandage rip in my elbow, a road rashed knee, and a severely chastened dog.

After doing a half-assed first aid job on myself, I decided to give the Kawasaki seal a test; it leaks. The expert was right, I should have replaced the o-ring, too.

To be honest, I shouldn't have been surprised. My "luck' with Kawasaki machines has been mediocre, at best. My first Kawi was a 1971 350 Big Horn, one of the lamest, heaviest, worst designed two-strokes in Japanese history. It and I battled out way to the end of the Canadian River Cross Country in 1972, crossing the finish line stuck in 2nd gear, with the forks all but seized, and various bits of the Big Horn littered over the last 100 miles of dry river bed. I sold the bike to a high school kid who promptly took off the silencer and the air filter and siezed the motor in less than 25 miles. He even asked me for a refund afterwards.

My second Kawasaki experience was with the original KLR600, the 1984 model. I didn't have any particular problems with the KLR, but it was the lamest excuse for a motor I've ever experienced and the least dirt-capable dual purpose probably ever built. The German kid who bought the KLR hung on to it for less than 100 miles before he tangled the kickstarter behind his leg, grinding the starter gear for several miles before the transmission blew up. He sued me for the repairs in small claims court and was disappointed when the judge disagreed with his view of responsibility.

My opinion of Kawasaki is only slightly above my opinion of military-industrial manufacturers, especially since Kawasaki Heavy Industries makes products for aerospace, oil tankers and other big ships, and all kinds of equipment where the buyer is often spending someone else's money and is less concerned with quality, reliability, and such things. If the Sherpa hadn't fallen into my hands for a relatively reasonable price, there is no chance that I would have gone looking for a Kawasaki. In fact, I was looking for a DR350 or an XT350 when I fell into the Sherpa. When I get back from North Dakota, I'll be looking again. 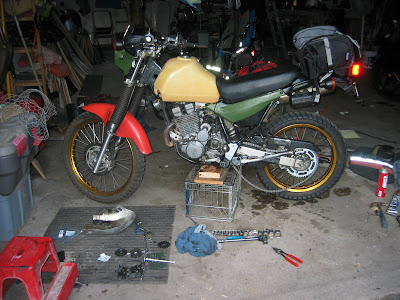 The Sherpa is going to have to wait a couple of weeks or more for me to get back to it. In a couple of weeks, I'll have a pair of seals and a pair of o-rings waiting for me and I'll try the repair again. I have to admit, I'm disappointed enough in the bike to be a little soured on it. That's not rational, but there you go. I don't remember claiming to be the only rational human on the planet.
Posted by T.W. Day at Saturday, June 13, 2009