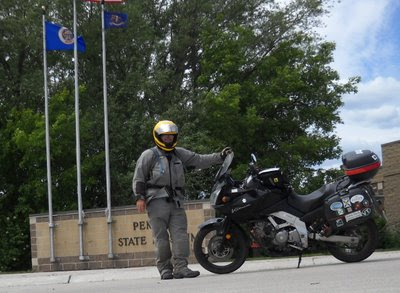 Obviously, from the dates on the previous posts, I'm home and have been for a while. Probably the aftermath of being soaked for 6-out-of-8 days, I'm trying to throw off a flu or cold. Actually, I wasn't soaked, but I was damp all of that time. My Aerostich gear held up fine, my Thor boots were worthless as water protection, and my camping gear was flawless. My 25-year-old North Face tent works as well today as it did when it was considered modern gear. However, I'm a 61-year-old asthmatic with a long history of bronchitis and damp is wet when it comes to testing those ailments.

The little bike didn't work out, it's still dead in the garage while I wait for replacement seals and hope nothing major was damaged when the oil dumped past the countershaft seal. The 650 did fine and I'd have to add some bonus points for the ELKA shock review, since all of the stuff that plagued me in Alaska was there in North Dakota but the bike tracked beautifully. Dirt roads were easy work and deep sand didn't send me into tank slapping conniptions.

The single state tour concept was a total success, in my opinion. Obviously, some states wouldn’t be worth the time or effort, but North Dakota has plenty to see and I could have spent at least two or three more days in Bismarck alone. I wish I had. That city has a terrific motorcycle and music community and it would have been fun to explore it more. A week in TR’s spectacular National Park wouldn’t have been excessive. I didn’t really do much in the southwestern corner, so I could have spent a couple more days in that area without feeling stalled out or bored. Doubling back to resolve the rear tire problem sort of tossed a wrench into my trip route and I didn’t have the energy to restart that section. Old people are easily worn down. I have always hated retracing my steps and wish that defect were more easily overcome.

I think, from now on, this may be the way for me to go on tour. I met a lot of people, saw a lot of stuff, had time to think about it all, and left when I felt like I was ready to leave. I could still go back for more.

June in ND is pretty amazing. My first time through the state, in 2007, I was impressed. This time was more of the same. In June, the bugs are barely evident, the desert is wet and beautiful, traffic is light, there is no competition for camping, the campgrounds are still clean and the porta-johns are practically empty, and the place is green and as allergen-free as it is likely to get. Getting out before the kids are out of school is the way to go, if you can go that way. June may be my favorite month.
Posted by T.W. Day at Saturday, June 27, 2009