The End of North Dakota 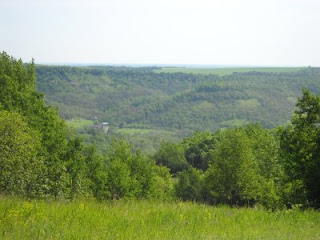 Nothing is open at 6AM in northeastern North Dakota, so I put in a 110 miles before breakfast. The bike was barely warmed up before I passed Rock Lake. That town’s campsite is on the lake, in a pristine location, with a decent john and showers. Freakin’ perfect.
I have a couple of ND roads to hit and a historic site and a scenic highway or two: Pembina Gorge, the Rendezvous Region Scenic Byway, and the Icelandic State Park. I’ll be back in Minnesota before the day is over.
I ripped through the recommended northeastern scenic byways, both of which were nice but required traveling through an awful lot of boring farmed plains to get to. Considering the pain required to see those spots, the phrase “fly-over territory” comes to mind. Stepping disks or teleporting would be a nice alternative to flying. 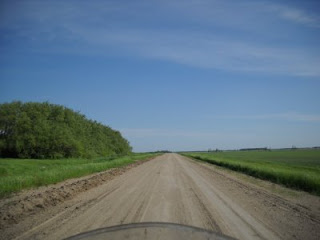 There is nothing to experience in the in-between territory and way too many opportunities to be dosed by commercial farming chemicals. I ought to repel or kill bugs and be weed-free for a couple of years now. Anyone who doesn’t think farming is industry has not spent time near farms. Between the animal factories (feed lots) and the plant factories (corn fields), there are enough chemicals, pollutants, and environmental hazards to make General Motors and 3M executives to feel good about themselves.
To test my luck and to get a picture, I went right up to the border crossing before turning south and east to go into Minnesota. After hitting the absolute northeastern tip of North Dakota, I crossed the river into Minnesota. My target for the night is the nation’s “ice box,” International Falls, Minnesota. When ever friends in other places hear about Minnesota, it’s almost always during the winter when International Falls sets the nation’s cold temperature records. It’s often colder in International Falls than most of Alaska. -50oF is sunbathing weather in January.
A clue to the area came at Roseau, a small college and tourist town that I hear about occasionally as part of the state’s MSF program. On the western edge of Roseau, I passed a really nice off-road motorcycle park, complete with big jumps, triple whoops, and some water crossings. Now I’m jealous. Roseau appears to be a healthy, middle-class Midwestern town. Much larger and much more urban than I expected.
I’ve wondered what this area would be like since moving to Minnesota. In January, when International Falls is regularly the coldest place in the States, I often get calls and email from friends asking, “How the hell can you live in that place?” International Falls is regularly 40oF colder than where I live. Their summer lasts about 2 fewer months. Their mosquitoes are a couple of pounds larger. They are on the boundary of Canada and the States, which is why their national park is called the Boundary Waters National Park. 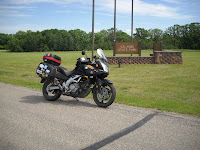 I anticipated International Falls being like most of the small towns I know in Nebraska, especially the dying part. International Falls appears to be a prosperous, lively town with a decent middle class, industry (Marvin Windows), and a strong tourist and sporting trade.
It began to rain the moment I entered the city limits, at about 8PM. My butt was sore and I was in no mood for playing tourist. I found a cheap campsite on the edge of town, set up camp, and died for the night at 9PM.
Posted by T.W. Day at Saturday, June 27, 2009