First thing (5:30AM), Thursday morning I wake up to the sound of a small motor. Just my luck, I’m two sites away from a sump pump. I put in my ear plugs and sleep till seven. The day started clear and warm, but cooled off by 7:30AM and clouded up quickly. So much for a second sunny day in North Dakota. 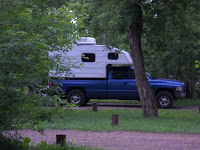 Turns out, it wasn’t a sump pump. It was a pair of douchbags firing up an ancient generator for some brain dead reason; probably wanted to watch old VCR tapes of their favorite Oprah shows. These same geniuses yakked late into the night, jabbering like a pair of old drunken hens. If you know who these trailer trash yokels are, smack 'em in the head just to hear it rattle.
Before leaving, I took in the reconstructed Mandam village and a bit of the old fort, especially the lookout towers at the top of the park. The reconstruction of the Abraham Lincoln Fort is a little sterile, but the Mandam houses are terrific. 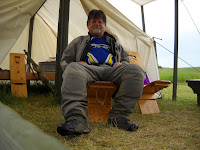 Going south on 1806, I was washed in a constant hard rain all the way to the Cannon Ball River. As usual for long trips, I over-estimated the condition of my rear tire and it’s vanishing quickly. Instead of the route I’d planned, I decided to head west to catch the Enchanted Highway back to the Interstate and, if the tire looks really bad, I’ll go back to Bismarck and get a replacement. 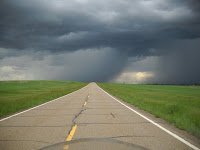 At the Enchanted Highway, the sky looks like hell about to drop on earth. There is a dark grey wall moving east fast and pouring rain as hard as I’ve ever seen in the near distance. I found a café in Regent and parked the bike so I could pretend to be hungry and hide out the storm. I got myself inside with about two minutes to spare. The sky did, in fact, fall. Probably because it was holding a few million too many gallons of water. 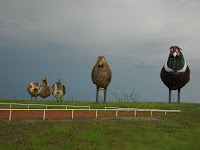 I'm going to have to look up "enchanted." The highway is pretty interesting, these bird sculptures are 20-30 feet tall. You can see them from a mile away, literally. Somehow, I thought enchanted meant something a little different, though. It's the hillbilly coming out in me.
My back tire is wearing out incredibly fast. I could probably get home fine on it, but I can’t do the other 1500 miles of ND that I’d hoped to see. I’m going back to Bismarck to see if I can snag a replacement.
I’m cold and my freakin’ boots leak like a mosquito net. Why is the only Goretex that works the stuff I get in my Aerostich gear? ND has received more than double the normal rainfall and I suspect I’m lugging a good bit of it in my gear, especially my boots. Tonight, I’m going high tech and I’m going to be spending the night in a motel. I need to warm up and dry off. Plus, it wouldn’t hurt to have access to a collection of outlets to charge up all my electronic crap.
Posted by T.W. Day at Thursday, June 18, 2009