This list has been a while in construction, mostly because I'm procrastinating. So far, I've listed:


And I'm half-way done. The list is in no particular order, so don't try to invent significance from the fact that I started with a street bike and have ended, so far, with another street bike. Most of the bikes I've loved over the years have been dirt bikes and regardless of how this list plays out, that will always be true. The older I get, the less in love I'm falling with specific motorcycles and the more I look at two-wheels as transportation rather than something more emotional. That means I'm having to drag up those old emotional attachments and apply some kind of value to those memories. Laugh, you damn kids! Wait 'till you're ancient and barely getting around without the help of Jack Daniels and an afternoon nap.

Anyway, number six: the 1977 Yamaha IT175D. This bike was the first motorcycle I'd ridden that I could wheelie easily and long. Don't ask me why, I couldn't explain it to save your life. The IT175D is a lightweight, two-stroke, reed-valved, mono-shocked, six-speed, drum-braked, dual purpose from the days when a bike like this might end up with a license plate in many states (such as Nebraska). No turnsignals, no electric start (no battery), no horn, and I don't remember if it had a brake light, but I suspect it did not. 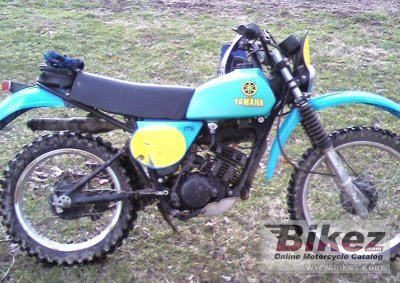 The ride ripped. Of course, I was still riding a 1974 Rickman 125 when I test rode the IT175, so my opinion was moderated by the mediocre bike I regularly rode. However, the motor was way cool, once you got it off of idle. Maybe the first 1,000 rpm was a little mundane, but the next 10,000 wound up and got the bike moving incredibly quickly. The suspension, by today's standards, was pretty old fashioned but it was amazing in 1977.

Today, I admit the IT looks pretty mundane, but in 1977 I thought the all blue, uber-functional cosemetics were totally hip. Everything about this bike says, "Take me somewhere dirty and let me go fast." My firs ride on the IT was outside of Hastings, Nebraska when a dealer foolishly let me take the bike out for an afternoon under the crazy assumption that because I had a job in 1977 (unlike most everyone in Nebraska that year) I might buy a motorcycle. There was no chance that I would cough up the one-thousand-something it would have required to buy that bike brand new in 1977, but I didn't have the heart to tell the dealer that because. . . he wouldn't have given the bike to play with if he'd have known.

Anyway, I headed out of town via residential streets until I hit a dirt road borded by a nice wide ditch. Once I dropped into the ditch, I started playing with the throttle and discovered I could do a long, balanced wheelie in 2nd gear. I did that for a while until I actually got bored doing something that I'd never been able to do before. So, I shifted to 3rd and kept going. I must have burned up a 1/4 tank doing ditch wheelies. I don't want you to think this bike, all by itself, taught me how to wheelie. I could consistently pull the wheel up and get over large and small objects comfortably on everything from my Rickman ISDT to my godawful Suzuki RL250 trials bike. However, I couldn't think of a reason to do long, obstacle-free exhibition wheelies, so I never bothered to do them. Until the IT175 test ride. That bike pulled the front wheel up and kept it up so easily that I became infatuated with wheelies for part of an afternoon.

After the wheelie experiment, I ended up at a local motocross practice track and took advantage of the IT's monoshock suspension and low weight to turn times close to what I could have managed on the Suzuki RM125 I usually rode at the track. The IT was a lot more fun, though. The extra horsepower on a similar frame made for bigger berm busting, consistently double-jumped whoops, and less time on the pegs as the monoshock sucked up the ripples on the straights and the impact of landings after jumps.

Everything about the IT175 said, "Buy me." I would have if I could have. My long-term allergy of short term credit was all that kept me from putting my name on a dotted line. If I'd have become an IT175 owner, I'd have riddend a lot more enduros, figured out adventuring touring a lot sooner, and I'd have probably hurt myself going over backwards showing off my new wheelie technique.

"I must have burned up a 1/4 tank doing ditch wheelies."

Hey! I resemble that remark. When I was 20-something I was absolutely as braindead as any other 20-something. How else would I have convinced myself that motocross was a good idea?

Shit, I'm still 20 something but not for long. I need to to learn how to get the front wheel up and quick!

It's a lot easier to lift the front wheel when you have something you need to get it over. Trials is the sport for learning controlled rear wheel steering and obstacle jumping. It's fun and you can do it in your backyard.

I had a 1979, I think, IT 175. I moved from a 70-ish xt 360 and my whole world opened up. I was living in Idaho Falls and every form of riding was easily in reach. There was a motocross track within ten miles and on the other side of the road you had a mix of roads and hill climbs. Within an hours drive we had sand dunes, think Rat Patrol. I had a friend who had moto'd all his life and he was a great teacher. When I saw the picture I had to do a google search as I thought the colors did not look "right". When I found the 79 model it came back to me. Thanks for the memories