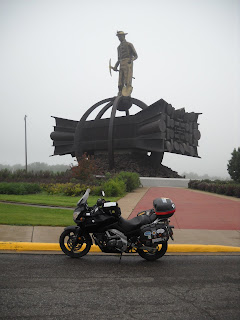 Monday, I woke to the sound of rain on the tent. I went back to sleep. At 8AM, I gave up waiting out the rain and struck camp wet. It was a little chilly, about 58F, as I packed up but it warmed up quickly. It didn’t dry out, though. I drove a couple hundred miles before breakfast. It rained all the way. 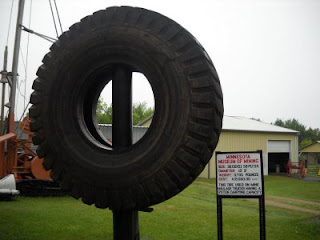 On my way south, I hit a couple of museums and took pictures of myself next to Minnesota stuff, but I was ready to be home by noon.
My route took me through Hibbing, mostly out of Bob Dylan curiosity. The town is amazingly devoid of anything Dylan-esque. There is one street sign, hidden by a business awning, announcing “Bob Dylan Avenue.” The library has a “collection” of Dylan stuff, but every Dylan fan I know has more stuff than that library. There is a bar called, “Zimmies” that announces some connection to Bobby, but I failed to see anything interesting and their window neon signs are probably the proudest the place gets to showing its association. 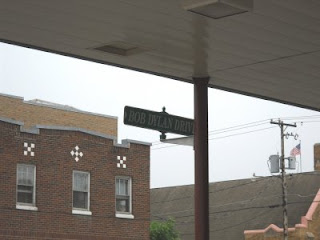 Here’s what The R&R Hall of Fame has to say about Bobby, “Bob Dylan is the uncontested poet laureate of the rock and roll era and the pre-eminent singer/songwriter of modern times.” Before they discovered Dylan, the Beatles were singing “Love, Love Me Do.” After Dylan (through the Byrds), they became interesting. Dylan invented the singer/songwriter category and made us all expect songwriting from any pop artist deserving respect. I could go on, but to cut it short I’ll just say Hibbing embarrasses itself.
Minnesota is notoriously ashamed of or jealous of its famous people; especially entertainment people. Dylan, Garrison Keillor., Johnny Lang, the Cohen brothers, Terry Gilliam, Vince Vaughn, and others have described nearly becoming social outcasts because of their success. I don’t think any of those people still live in Minnesota. In fact, the only celebrity I know of in Minnesota is Kevin McHale, the ex-Timberwolves coach, and he’s regularly savaged in the media and by fans. Homer loyalty doesn’t seem to be a big issue in the state.
It’s pretty easy to imagine Dylan’s ex-high school jocks taking over the town and demonstrating the famous Minnesota jealousy at Dylan’s massive success and world-wide influence. A “damn guitar-playin' geek” who became more famous than the state's most famous football or hockey player? 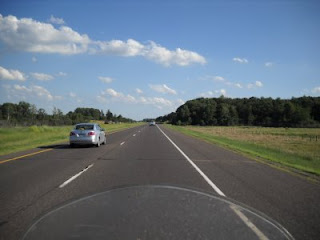 When I dropped into the Duluth/Lake Superior Valley, I could have sworn the temperature fell near freezing. I zipped up everything and considered putting on my liner. It was only 48F, but it felt much colder. I stopped at RiderWearHouse and got a tear in my jacket repaired and bought a fix for the weak link in my riding gear, my leaky “Goretex” lined boots. Aerostich makes an “Emergency Boot Cover” that does for my feet what their Triple Digit Glover Covers did for my hands. Better late than never? We’ll see.
Posted by T.W. Day at Saturday, June 27, 2009

Airflow guru Ken Augustine sent me a URL for a ton of photos of Doxford works in about 1958, when thousands of people worked there, building ships and marine Diesels in Britain. Rows and rows of big lathes, all at work. Giant steel castings in preparation. Huge bronze propellers being bored. Then in 1980 a British govt decided it was uncompetitive and behind-the-times, and it went out. I suppose the Koreans got the work, and could do it more cheaply thanks to investment in up-to-date technologies. All those huge halls and shops. Sorry, guys - no work.