Tuesday, I’m up with the birds and out of camp at 6AM. I don’t go far, though. I stopped in Lisbon for breakfast and to watch the first hour of the day’s long rain. I gave up after doing everything I could think of, reading until I was bored, and taking an accounting course via email. 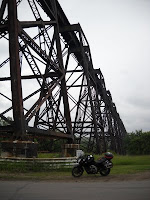 Later, I was in Valley City where the river probably isn’t as prized, since the town was swamped by the Sheyenne in April. There were still sandbags stacked against houses and businesses.
It took me a while to figure out what was going on in Valley City. I stopped at an information center/museum for a map and learned a little about the area. On advice I got at the museum, I went north to the edge of town to see the giant railroad bridge. It's pretty impressive, don't you think?
I ended up the day in, believe it or not, Napoleon, ND. This is truly Mayberry. The main drag was being dredged for new water mains, so the town wasn’t looking its best, but it’s a cool little town with a city pool, a city campground, a couple of good restaurants, and a park full of doves to sing me to sleep. $6/night for “primitive camping” which includes a shower and a couple of bucks and you’re in the pool, too.
Posted by T.W. Day at Thursday, June 18, 2009