Cruising through Oil Fields and Forests 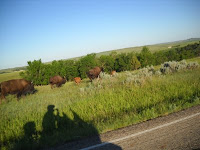 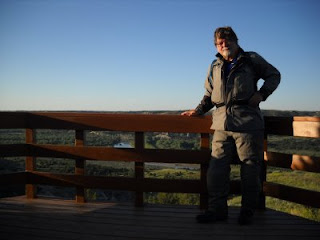 I did the tourist bit out of Roosevelt park, took some pictures, walked some distance, and had fun owning the park road at 6AM. Heading north. I got up close and personal with a small herd of buffalo who weren't particularly intimidated by me or my motorcycle.

I took in a collection of ND scenic roads and crossed a hell of a lot of boring plains (sorry, if I’ve offended boring plains lovers).
I ended up passing the International Peace Garden without seeing a sign announcing its existence. That put me in Rolla at quitting time. Rolla is one of those “boarder towns” that is on the edge of vanishing or growing. Unlike Bottineau or Langdon or a few other places I’ve passed that seem to be immune to small town entropy. I haven’t made the slightest attempt at keeping score, but it feels like North Dakota is mostly holding its own, rather than dying as some have reported. Some of the northwestern oil towns are booming, which could be good and could be bad since the oil reserves are pretty shaky for a long term bet.
30 years ago, a geophysicist used a bowl of spaghetti noodles to explain oil resources to me. He said, “When the bowl is full, you can stick a fork anywhere in the bowl and you’ll get spaghetti. When it empties out, you have to get creative with the fork to pick up a noodle.” North Dakotans brag that the “new fields” in the northwest are being drained by “drilling down two miles and across another two miles.” First, they aren't new discoveries. Oil geologists have known about the Bakken Formation reserves for a long, long time. We just didn't have the technology or need to drill for anything that complicated. I’d say a 2x2 mile drill routine is about as close to extremes of getting “creative with the fork” as I can imagine. The next tactic must be really close to swabbing down the bowl with a piece of bread to completely sterilize the bowl/planet of that resource.
When we are that desperate, it’s pretty obvious that the end is in sight. I wonder if there is any thought at all of saving some of this material for future generations? I wonder if we even consider our own kids a “future generation?” We seem to be desperate to strip the planet in a single generation. I suppose that's always been true, though. Clearly the Pennslyvania, Texas, Oklahoma, California, and Kansas fields have been worked dry with the same "efficiency."

Rolla was an experience. The only campground in town is the town camp at the fair grounds. It looks pretty desolate, with 8 camper hookups and no provision for tent camping. A sign says, “Pay for the site at the Sinclair station.” I found the station at the edge of town and paid my $15. The kid at the station said there was a “white building with hot showers and bathrooms near the campground. I went back, set up my tent, set out my gear to dry in the twilight and set out to find the showers. I struck out. I was about to explore another corner of 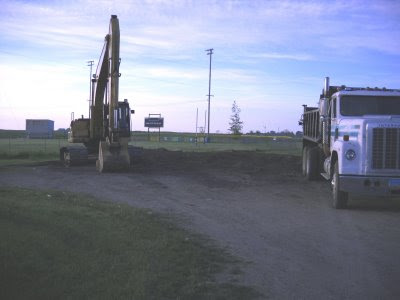 the fair grounds when a cop came through the parking lot. I asked him where the showers were and he pointed at a pile of dirt and a backhoe, “It was there until yesterday. I don’t know what they’re planning to do with the campground.”

I’m hot, sweaty, and shower-less. The cop offered to open up the town hall for me to use the sink. He did. I did. Afterwards, I tried to cool down by doing a little camping maintenance and writing and was constantly interrupted by a group of kids who seemed to think I was there to entertain and supply them. I gave up and hid in my tent, reading, until the sun went down and I was comforted to sleep by a halogen light that blasted through my tent walls all night. Now that's fine camping. No wonder my wife always finds something else to do when I want to hit the road with her.