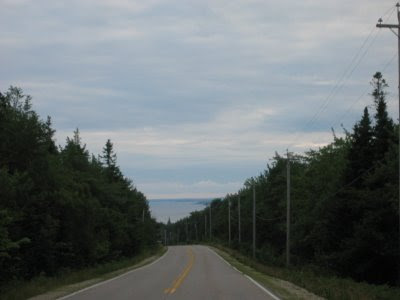 I overspent on a motel last night, it was “biker-friendly,” clean, had plenty of hot water and towels, and convenient to food, though. $100 for a tiny room is silly. My hammock is turning out to be more hassle than advantage. There aren’t many campsites, apparently, with a pair of usefully spaced trees. The hammock is less than a coffin on the ground, so I need trees. I may ship it home and buy a 1-man tent somewhere. It packs a little large, too.

The highway to and into Nova Scotia is a rocket pad. Traffic is allowed to travel at 110k/h, but it speeds along a good 40k/h faster than that. I was getting passed like the good old days in Montana. If I weren’t so far from home, insurance, mechanics, and a tow truck, I’d be inclined to play along. Since I am where I am, I’m going to take it easy on my equipment. I sort of like this bike and would like to ride it all the way home; 2200 miles away from where I ended up today.

I found Halifax right where the map said it should be. Garmin directed me to the “Halifax Airport,” which appeared to be a dirt field about two miles from the bay. “Detour” signs directed me past a guard shack, where the guard waved me on while his buddy’s dope sniffing dog looked at me as if I were something to eat. The further I rode up the route my GPS indicated, the sketchier the airport looked. I saw what looked like C12 cargo planes in hangars and one jet with an insignia I didn’t recognize. I kept going where the GPS told me to go, until I came to a really nasty dirt road with a van parked in front of an old man standing next to a stop sign. I stopped.
“Where do you think you’re goin’?”

“To the airport to pick up my wife.”

“Not here you aren’t. This is the Canadian Air Force base and if you go over that hill a couple dozen guys will be takin’ pot shots at you until you stop movin’.”

“I don’t want that. This isn’t the Halifax Airport?”

Turns out, Garmin missed the airport by about 35 kilometers. The Halifax International Airport is way north of town, the Air Force base is not. I found the real airport, the one for the “rest of us” and got my travel plans sorted out. I also tracked down a hotel for the last night Robbye will be in Nova Scotia. Other than figuring out how to stow her luggage on top of my luggage, I think we’re set for the next few days. The old deal about how two people can keep a secret only if one is dead sort of applies to road trips, too. One person on a road trip is an adventure and an exercise in freedom. Two people is a convention. The planning required for two people is exponentially greater than for one. And that’s when the second person is as easy to please as my wife. Any normal person would need to be killed.

After all the plane, motel, hotel crap was done, I headed down the coast, west, to look for a campground. I found one about 60 miles west of Halifax and settled down to read a little, write some of this blog, and to listen to the stream beside my campsite. It’s getting dark at 8:30PM, so summer is almost over. No bugs, though. The campsite has a pool, but I’m too done in to take advantage of it.
Posted by T.W. Day at Friday, August 08, 2008