After the exciting ride to the Marquis of Dufferin Seaside Inn (http://www.marquisofdufferinmotel.com/) the bike was mostly parked for a day. We walked around the resort areas to work up an appetite, taking extra time to relax on the Inn’s pier. The resort has a collection of gardens and Robbye took special enjoyment out of pointing out plants that won’t grow in Minnesota. We spotted several loons in the bay and even more gulls and a variety of ducks and other water fowl. 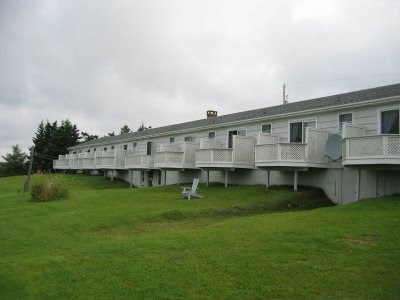 The inn has one telephone, stuck to the outside of the restaurant office building. I’m still wrestling with the identify theft residue and I spent about an hour on that phone sorting out charges that did and did not belong to me with my bank’s fraud representative. Otherwise, if the world ended we’d never know. The room does have a small television with the usual 60 uninteresting channels, but we’ve chosen to avoid that opportunity. I called Holly and left a message that Robbye had arrived and we were alive and safe. Otherwise, this will be 4 days without contact with our usual world. I'll miss hearing from you all. Right. 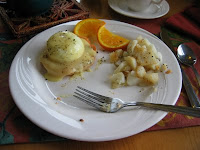 After a superb breakfast at the Inn’s restaurant and a lazy morning, we took a ride to Sheet Harbor to hike and enjoy the scenery. It was an overcast but otherwise clear day and we discovered several spectacular views and local hiding places. We even stumbled on a local parade. When we got back, we hiked to a nearby waterfall, accidentally discovering some wonderful local gardening on the way.

The resort loaned us a canoe and we paddled out into the bay, experiencing some wave action and working up an appetite for dinner. We found a fairly isolated beach on the east side of the bay and waded around looking for seashells and enjoying the solitude. Even during the day, much of the time spent is spent in dead quiet, outside of natural sounds.

Dinner at the resort was the same kind of rare experience as was breakfast. Robbye had Scallops Dufferin and I had Beef Burgandy. If presentation is an important part of a dining experience, the inn’s chef is an artist. The owner, Pat,s does every job at her inn. She is, clearly, a marketing wizard, but she is a management and customer service wonder also. I don't know if I have ever felt more at home away from home. This is a terrific place and if you only came here and stayed for a whole vacation you would come away rested and satisfied.

Saturday was no more than a 10 mile biking day. I didn’t even show the motivation to cover up the bike when we crashed for the evening. I’m writing this at 7AM on Sunday, our 41st Anniversary. Robbye is gently snoring, working on 10 hours of sleep for the night. I woke up to the sound of loons calling at about 6AM. The place is so quiet that you can hear gulls across the bay. The highway wraps around the bay, so every car that passes is audible and visible. In the last hour, I’ve seen and heard two cars. Our neighbors are waking up and I can hear every word they say. They can probably hear me typing. It’s that quiet.

Again, it’s a little overcast, but the air is clear and I can see miles of the shoreline. Robbye had hoped to see a lot of Nova Scotia on the trip and I thought she might be over estimating her traveling capability. The flight and airport hassles and the 90 mile trip to the inn was about all her knees were able to tolerate. She was stiff and in pain Saturday morning. She’s tough and really wanted to experience more than a motel room, so we walked (slowly) around the resort and took a short ride to Sheet Harbor to check out the town, river and bay. 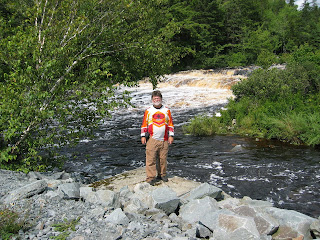 It was worth the effort. The old industrial area had reverted to most of its natural state at the nature walk around the river was a vacation in itself. It’s easy to forget that traveling isn’t a means in itself. The point is to go places and experience them.

I could, easily, spend a week on the deck of this motel room. It’s dead quiet, except for nature sounds, the view is spectacular, and the air is as clean as anywhere on earth. We took a long canoe trip around the bay, finding an isolated shoreline to look for sea shells and animal life. This was the first time either of us had canoed on an ocean and the waves were mildly exciting. At first Robbye tended to panic and seize up on the larger waves but, after I offered to whack her on the head with my paddle, she settled down. Crossing the bole at the mouth of the Salmon River was a lot of work and we’d generated a reason to eat another terrific dinner at the Inn’s restaurant.

Sunday, I sort of hoped we’d make a run for the north shore. We rode into Sheet Harbor to check out the galleries; all closed. We headed out toward the north shore, but when we stopped at about 50 miles to check out a historic city, Sherbrooke, Robbye complained that her knees were already giving out. She could barely get off of the bike. We spent a couple of hours walking around Sherbrooke, a town that was once a booming logging, gold mining, and ship building city and is now nearly a ghost town.

We’d spotted a wild looking river on the way out that we’d planned on checking out. I was so focused on watching for animals on the road and she was so focused on looking for a moose in the swamps that we ended up at the inn and missed seeing the river altogether. We stopped at a roadside stand and had the best mussels ever prepared by human hands and ice cream.

Robbye was hurting pretty badly after that 100 mile ride, so we took a short walk on the beach and called it a night. Monday is our last day here. Woke to the sound of a loon touring the bay, calling for attention. The gulls chimed in and drowned out the musical sound of the loon with their screeching. The bay is flat as a Kansas plains in the morning. Totally waveless.

If the Fed-X guy doesn’t arrive with my replacement bank card by noon, we’re going to leave without it. I’ll survive with the backup card Robbye brought and my cash.

It’s another overcast, high visibility morning. The view from the deck is awesome. The cabin next door is stuffed with a family of small children. They are breaking my concentration but cracking me up. Kids are such doofuses.

If I can get Robbye out of bed, I’d like to take the canoe out before breakfast. She woke up about 7:30 and we did a several mile, cross-bay canoe trip.

My money and credit card didn’t arrive on time. We’re on the road to Halifax. Robbye is having a terrible time on the bike, especially with the luggage loaded. 25 miles at a time are about the most she can stand. We made it to the hotel. Unloaded. Rode into downtown and saw some of the Busker Festival and bought tourist junk. Watched a guy lie down on a bed of nails and have another guy stand on him, for a crowd’s pocket change. Talk about a tough job. Tomorrow, early, Robbye is going home. I’m going back east to see the rest of Nova Scotia before I head back to the US.
Posted by T.W. Day at Monday, August 11, 2008