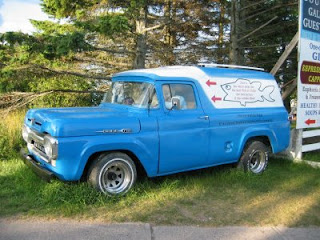 The next day, Saturday, was a massive improvement. No chills, no belly heaving, and nausea is back to the philosophical realm. I woke up at 6AM, took another scalding shower in case some memory of the previous day lived in my gut, and we were out of the cabin and on the road by 7AM or so. Today, the target is South Baymouth on Manitoulin Island by 5:30PM. It’s a reasonable target and takes us through one of the most scenic bits of Ontario, in my opinion. The best description I can generate of this area is “the southern Rocky Mountains with a giant lake on the south side.” The mountains, of course, are not there, but the rocks are. Giant chunks of granite, shale, and other bits of geology that I should, but don’t recognize decorate the landscape and the Trans Canada Highway is cut right through this material. 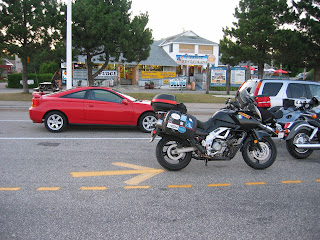 It’s a great road and a constant source of entertainment. Mostly, the traffic is light and moves quickly. We passed a fair number of Canada’s finest flashing their lights behind some unlucky motorists, but they don’t seem to be viciously aggressive about enforcing the 90km/hr limit because we’ve pushed that pretty hard constantly and haven’t attracted any official attention.

There is, in my opinion, nothing to see in Sault Ste Marie and we take the new bypass and skip the wonders of that boarder town. The traffic is a lot heavier here and slower. It takes a while to get to the cutoff, Espanoia, and from there on the going gets really slow. I fired up my helmet cam for the first real test and managed to get it on the helmet after about a minute of one-handed fumbling. Turns out, it works really well. Good thing, since my Sony DVCam died in the rain yesterday. Note to self-send tapes back to Minnesota with Robbye and get a SD Card USB thingy. 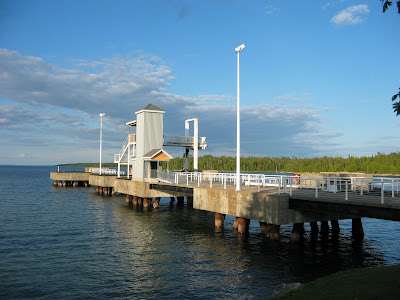 South Baymouth is booming on Saturday. There is some Canadian holiday this weekend, plus a music and art festival, and something else. Whatever. The motels and campgrounds are all jammed. Scott had made an advance reservation for the late ferry and discovered that there was no option for moving it to the next morning. Good thing. We discovered that every room and campground was full after he asked about moving his reservation back. On a motorcycle, I could have gone any time. We ended up catching the late, 10:30PM, ferry across Lake Huron and discovered that something was going on on the other end of the link, too. Every motel was booked from the tip practically to Toronto. We stumbled on to a town campground in Owen Sound and put up “camp” at 1:30AM. I hate making camp in the dark and this turned out to be no exception. When I woke up in the morning, the head end of my hammock was on the ground.

The crows were doing their nature’s alarm clock bit at 5:30AM and they did their job on me. I struck camp and let Scott know where I’d be (at a Tim Horton’s in town) as I rolled out of camp. He showed up an hour later, looking no better than I felt.

I struck up a conversation with an older guy, who’d driven a truck in the Canadian west 30 years ago. He described the Dempster as being pretty much the same road I crashed on. Time doesn’t, apparently, improve or change everything.
Posted by T.W. Day at Monday, August 04, 2008