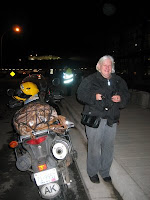 I found a great campsite last night, got a solid night’s sleep, and was indecisive about my next move. I need to get to the resort, dump gear, get to the airport, pick up Robbye at 8:30PM, get back (85 miles) to the hotel. I also want to see some of Nova Scotia while I wait. I headed west toward the ferry (Yarmouth) to see what that ride might be like when I get ready to leave Nova Scotia and to check out the coast. I gave up at Liverpool.

Liverpool is some kind of demonstration of terrible city management. The town is cute and ought to be a tourist mecca, except that the city mismanagement was viciously greedy. There are parking meters all over downtown ($1 an hour) and the place was dead empty. At least a half-dozen stores are having “going bust sales” and I didn’t feel motivated to leave my bike long enough to see if they were selling anything I’d want. I need a tourist

Had breakfast, decided to head north to the Kejimkujik National Park. I made it to the park, but didn’t have time to do much. I probably should have just gone to the resort and slept so I’d be alert for the ride to the airport. As it was, It was a blast to get to the resort, unpack, and turn around for the ride back to Halifax Airport.

People commute this far every day, but I don’t know why. I’d be miserable if I had to retrace my steps this far more than once or twice a year. I can’t imagine living anywhere so perfect that I’d drive 100 or more miles a day to live there. The trip back to Halifax was pretty boring. It would be less so on the third time around.

I got to town early and it was raining. I knew Robbye would bring inappropriate gear, other than the rain pants I packed for her, so I looked for a shopping center where I could buy disposable rain gear. I wrestled with the Halifax freeway system, which was designed by Minnesota DPS rejects or someone equally unsuited for urban planning. Exits are few and poorly identified and even more poorly located. Signs are usually placed right on the exit and are labeled to be as close to perfectly useless as possible. I found a hell-hole of a shopping mall that looked like a carbon copy of the dumbest plan ever concocted by the Mission-Veijo Company. It was so new that no part of it was on my 2007 Garmin maps. However, about half of the stores were already going out of business. A mostly customer-absent Home Depot, Wal-Mart, Canadian Tire, and Best Buy were surrounded by other name brand clothing stores that have failed to find customers all over the USA. I hoped to find a sporting goods store that stocked Nikwax products, but no such luck. The entire mall was designed for clothes horses. A whole, larger, section of the mall was uncompleted and, if the current renters are examples, there won’t be much point in finishing the exercise in fiscal irresponsibility.

Halifax had been cursed with the Eagles in an outdoor concert during the week. Some enterprising person read the weather report and bought out all the disposable rain gear from every store in the mall. They probably made a fortune. I, however, struck out.

It stopped raining when I gave up on finding gear for Robbye. I decided to go to the airport and wait for the plane, maybe get some sleep on a bench. When I arrived, I noticed that the 20:30 flight from Toronto had “arrived.” Nuts, Nova Scotia is yet another time zone. I was late instead of early.

She was there, pissed, worried, and angry as hell at the airport and Air Canada folks in Toronto. Apparently, the airline worked hard to lose her box of riding gear. Just in time, she rescued it from the Toronto “lost and found,” although it was labeled and any semi-competent system would know it needed to follow the owner’s flight. Flying is harder, these days, than walking. You have to seriously want to go somewhere to put up with the stupid systems these stupid people have put in place to make life entertaining for terrorists. I don’t want to go anywhere that badly. I’d rather ride cross country than fly. If there is a reason for me to get there fast, I’ll just pass on the opportunity.

Once out of the airport building, we got her stuff together, loaded it and her on the bike, and headed for the resort. It started raining almost immediately. Of course, it was pitch black with total cloud cover and rain. It rained soft and hard all the way, all 92 miles, to the resort. The road was dark, every town was shut down for the night, and there was no rescue between Halifax and our destination. I probably averaged 10kph below the speed limit for most of the trip. Visibility was no better than 100 meters in most places and for a long stretch of highway the road was newly paved and unmarked. It was like riding on a narrow black void. Often coming into a town, the bike hydroplaned across sections of pooled water adding a new level of insecurity to the ride. My knees and back were aching from tension and I suspected that Robbye’s already damaged knees providing worse pain. Several times on the way, she whacked me out of fear and frustration, but she didn’t want to stop and change her gear. “Keep going,” she’d shout. As we past Sheet Harbor, about 5 miles from our resort, she really whacked me and I understood her frustration.

We were both soaked when we arrived. My Aerostitch gear had kept me dry through 20+ days of Alaska and western Canada rain, but it didn’t hold up to a Nova Scotia soaking. Robbye wasn’t that much wetter than me, having used me for a rain shield. It was a long, miserable night drive, but the animals were absent from the roads. They were probably too smart to be caught out on that kind of evil night. If a deer had run on to the road, we’d have probably hit it and killed us all. At some point, that thought might have provided more relief than terror. To start off her weekend in Nova Scotia, we had a real motorcycle adventure.
Posted by T.W. Day at Monday, August 11, 2008