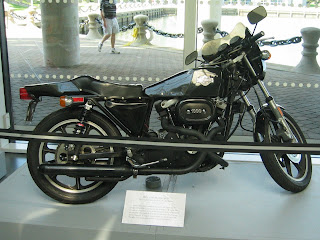 It was a non-motorcycling weekend. I was in Cleveland for the duration, visiting two of my life’s best friends. Brett has been a motorcyclist almost as long as me, but we won’t be riding anywhere this weekend. We’re just catching up and goofing around town. I’ve been to the R&R Hole of Fame before, but since Madonna has been inducted I’m afraid I’ll contract some dorky disease if I actually spend time there. However, it is the cool place to pick up an Ohio-based sticker for my luggage.

Speaking of stickers and luggage, I am beginning to suspect the adventure touring guys like aluminum cases because they hang on to stickers better than plastic. I seem to be doing a first-in-first-out sticker replacement as my oldest stickers are blowing off of my GIVI cases making room for the new ones. I lost Idaho and Washington somewhere in Quebec. Manitoulin Island tried to escape yesterday afternoon. I forgot to see if it’s still there when I stopped for gas the next time. The trick, if you have the resources, is to clean the case with soap and water, rinsing really well, and wipe it quickly with something like lacquer thinner. The thinner softens up the surface of the plastic, so the sticker’s adhesive can find something to bond with. Every sticker I’ve attached this way is still solidly stuck in place. The others are randomly and precariously stuck in place.

Brett moved “up” to a Goldwing a few years ago. I’m waiting to hear how his golf game is progressing any year now. At least it’s not a Harley, right Brett? I’m kidding. I like Goldwings. I’d have one if I could afford it and if I had an extra airplane hangar attached to my garage. 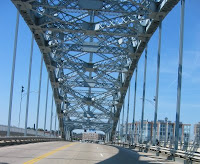 Tuesday, I’m on the road toward Lake Michigan. My “plan” is to hook up with a ferry and avoid Chicago. The two ferry towns are Muskegon and Ludington. The Muskegon ferry is a “rapid shuttle” and costs accordingly. I’m tempted, but I’d like to take in Green Bay this trip, so Ludington makes more sense and is $40 cheaper. There are several good campsites between the two towns, so I expect I’ll keep going north and try to find a place to park close to Ludington. I am wiped out, for some reason. I didn’t sleep more than a couple of hours last night, a sign that I’m ready to hit the road again. 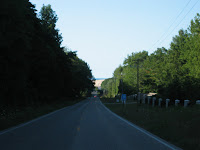 There isn’t much to see or photograph between Ohio and Lake Michigan. Miles and miles of small towns and farm land. The weather is perfect; overcast, slightly cool, little wind, not much traffic, and it clears up about 5PM so visibility near the lake is terrific. I stopped more than usual because I was falling asleep at the bars. When I’m “pounding out” a 400 mile day like this one, I’m particular amazed by the Iron Butters. It is just mind-numbing being on these straight country roads, passing through one carbon-copy small town after another, watching for deer and cops, trying to stay awake. I live for the three corners per county that is, apparently, the allowance in Michigan.

I bumped into a guy watching his kids play at a park in Grand Haven. He wanted to talk about motorcycles and I didn’t have the heart to tell him I was dying of boredom on his favorite roads. He owns an ’84 Virago, but (like everyone in Michigan) dreams of owning a Hardly. He received my sympathy and I got back on the road.

Eventually, I made it to the coast of Lake Michigan and headed north. I paused in Muskegon, considering the rapid shuttle. I, of course, am not man enough to even think about riding through or around Chicago. In my opinion, Illinois is nearly the perfect hell for motorcyclists. Insanely incompetent motorists, lousy roads, toll booths ever 50 feet, and a city so hostile that its own residents argue about where it’s safe to be. I worked for a Chicago-based company for a short while in 1991 and learned that the only way to travel in Chicago is by bus or train. Even then, the risk outweighs my motivation. Twice, while fumbling for change at a toll booth, the car behind me tried to hurry me along by bumping into my bike and that’s all it took for me to write this city off on two wheels. I’m impulsive, I know.

Out of nostalgia, I decide to pass on Muskegon. In 1997, when I was bringing my new-to-me SV650 home from Cleveland, I decided on the Badger Ferry at Ludington. That was a great ride and a terrific memory. I decided to redo that path on my return from this trip. I made it about 400 miles from Cleveland to a state campground a few miles south of Ludington.

Out of boredom and time to burn, I decided to test my new tent pole repair kit, after mostly making camp. When I bought the kit, I was certain that the pole sleeves would be too large, but they were slightly smaller than my pole’s outer diameter. So, instead of doing the duct tape shim I’d planned on, I needed to disassemble the pole and heat the sleeve to get it over the pole. That worked, but I ended up needing to cut one of the other poles about 1” shorter to compensate for the extra length from the sleeve. That meant that I needed to cut an aluminum pole with my knife. That worked, too, after some inaccurate attempts at scoring the pole. I used a rock for a grindstone, to smooth out the pole end, and I was ready to test the pole repair. Worked like new.

After wrestling with the poles, I discovered that in my need for a third hand in restringing the shock cord, I’d tossed the repair kit’s feeder wire somewhere on the ground. I wandered around, looking like a chicken searching for grubs, and attracted the attention of my camping neighbors. They probably thought I was looking for something important, but they joined in looking for the wire and found it about 6’ from where I’d last used it. Can’t explain that. Out of sympathy for the retarded old biker, I got an invitation to dinner. We ended talking until about 9:30, past my camping bedtime, and I fell into the hammock and went immediately unconscious. As much as I enjoy my bed at home, it will never beat a hammock as a place to sleep well. The night is windy but dry, so the rainfly remains half-installed and I have a fine view of the giant pines to which my hammock is attached and a sometimes clear sky full of stars. Being an old guy, I wake up a few times during the night, but the wind rocks me back to sleep and I am more rested in the morning than I ever am at home or in an unfamiliar bed. I’m going to hate coming off of the road when this trip ends this week.
Posted by T.W. Day at Wednesday, August 20, 2008