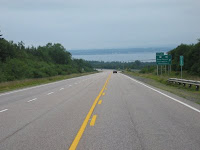 I’m packed and out of camp by 6:30. I slept well and am ready to make some miles up. I put in 140 miles before breakfast. Made it to the harbor to check out the ferry to the mainland. Fog slowed my progress most of the way from New Glasgow to the Digby harbor. Sometimes it was thick as goo. More of that Scotland feel, I suppose. The scenery, when I could see it was pretty cool. A lot like an exceptionally hilly and wet eastern Kansas with the same crops (except for occasional apple orchards).

I stopped for breakfast and an attempt at finding replacement parts for the hammock. No luck, but I got an idea for the repair from talking to a clerk at Canadian Tire. He was looking for fiberglass tape, which gave me the idea to wrap the pole end with nylon rope and duct tape that on tight. Might work. Might save me having to buy a tent.

No plan today, except to keep moving. I figured on hitting the Digby ferry. If that didn’t work, I’d move on to Yarmouth. I picked Digby as my first choice because I figured the combination of a ferry crossing and a boarder crossing might overwhelm my capabilities. I lucked out and arrived at Digby right in time to get on the ferry. $80 for the bike and my over-60 discount. I have no idea how long it will take to cross the bay, but it doesn’t much matter because I’m not having to work to get the job done. 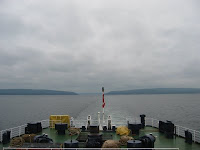 Like the fort, the ferry is pretty empty. I had no problem getting on the boat, but either did a collection of foot passengers and a few cagers. For August, this is pretty slow business. “Prime tourist time” may have a different meaning if energy and economics continue to flag. I saw a lot of closed businesses on the way across Canada. Some of them appeared to have barely opened before they went bust. Lots of houses for sale, too.

Some little parent-less retards commandeered the ships computers and dialed up a noisy on-line computer game. I put up with the noise for a few moments and turned off the computer’s sound for the little morons. Mommy bitched, so I told her to turn it back on if she didn’t know how to parent her little retards. She left in a pout. A few moments later, a steward came by and took the little shits off of the computer and delivered them to gutless, brainless mommy. Even Canadians are allowed to spawn without credentials. What a world!

After St. John, I’m taking Highway 1 to Maine. I haven’t decided if I’m going to cross Maine or follow the coast for a bit. I’ll decide when I get there. I’m generally westward bound for the rest of the trip.

Ferry’s are peaceful. Some folks are on the deck whale-watching. I’m too lazy to be that focused, but if someone yells I’ll look up. It’s too foggy for pictures and we’re too far from shore for the pictures to be worth much. It’s warm, however. I’m in my riding gear, but it’s all opened up and it feels good to have the fresh air without being cold. It’s a long ride. We’re heading toward 2 ½ hours and land just came into sight. The Atlantic is calm and even Robbye would enjoy this motionless ride. If you don’t look out the window, you’d barely know we were moving. It’s not the north Atlantic I expected, for sure.

I’d like to make Maine before dark, if possible. Now I have a goal for the day. It’s good to have goals.

I made Maine, barely. About 20 miles in, in fact. I was doing well, even ahead of my non-existent schedule, until I hit the boarder. I screwed up. I was wearing my wife’s “Green Man” t-shirt. I hadn’t brought anything but nylon dirt biker shirts and thought a t-shirt would be comfortable as a change. The boarder guards took one look at the shirt and flagged me for “inspection.” Honestly, they were pretty polite about it. I didn’t get a cavity search. The worst thing about the whole episode was having to sit under the leering picture of the head What-Me-Worry idiot while his minions went through my gear and burned up my daylight. They made a mess of my top case, but probably neatened up my side cases. Other than their almost pathological lack of humor and the lost time, I can’t say anything bad about the experience. Where do they find guys so humorless? Is there a factory they send ordinary people to for funnybone extraction?

I’m camped in an incredible place. It’s a good distance from Highway 1, so the traffic noise is vanishingly absent. Some local doofuses are firing off fireworks, but that will quit in an hour or two. My “fix” for the screwed up tent pole sort of worked. I should be able to survive the night, anyway. I plan to hit the US’s most eastern point, tomorrow. After that, explore more of Maine. It’s good to be back in the US where my AAA card is useful.
Posted by T.W. Day at Friday, August 15, 2008