Five Days on the Road 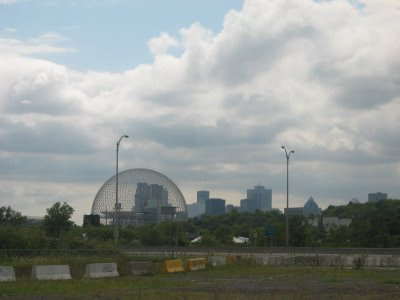 Monday was a vacation/tourist day. Scott arrived late afternoon and when I got back from the 1000 Islands excursion we spent the rest of the day catching up. Lots more talk and a wonderful home Italian meal prepared by Lee. She served the best bread I’ve ever eaten and it was all I could do to not curl around the plate and growl at anyone else who tried to take some.

When I called home, my wife said my credit card company had been calling, lots. Of course, she didn’t have the number, so I called the general purpose VISA number and got a kid who didn’t seem to have a clue. I wasted time with him for a while, he wasted time saying something to the folks in the VISA department, and I went on my merry way. Turns out, someone else was being merry, too.

Other than minor disasters, I’m getting into the hang of it today. It took a while to say “goodbye” to the Hills, so I didn’t get on the road until about 8:30. I didn’t get much out of the backroad route I started with. Mostly Nebraska farm land and I’ve been there and done that. I took a few pictures, but got bored and flipped the boarder into Canada and headed east with commitment. I mostly made good main highway time, but got lost once and burned an hour in some mid-sized town that was having a festival and had almost every escape route blocked with barriers and an excessive number of cops. When serious irritation set in, I found the CA20 freeway and dropped the hammer for a while with the rest of Quebec’ers. These folks drive like I’ve heard Europeans drive (I wouldn’t know from actual experience) and it is easy to hang on to a fast group leader and average 90mph for as long as the gas holds out. Lots of bikes, at least every 10th vehicle is a bike and, some areas, I’d bet we’re almost 1/5 of traffic.

I bailed in Montreal. I was there in 1989 and saw a lot of the city. I hoped to see more on this trip but the Montreal speed freakers did me in. Kids in Honda or Toyota sedans imagine themselves to be drivers. It’s mostly twenty-something guys, but a few older doofuses join in the fun. They drive as fast as their piles of crap will travel, crawl up your rear fender, swap lanes without a glance to see who is there, and, hopefully, die often enough to justify their lousy driving skills. Quebec, in general, is very third world, driver-wise. Lots of bumper chasing, thoughtless lane-swapping, and crazed driving behaviors. The larger cities are, as best I can tell, police-free on the freeways. Maybe they are hoping to thin out the population by letting the fools sort themselves out. Anyway, Montreal was too much for me and I gave up after nearly getting killed a couple of times.

I kept traveling until Quebec City, the province capitol. The city was celebrating its 400th anniversary and I got there in time for a pretty cool downtown parade. I practically drooled on diners’ plates because the street-side cafes’ fare looked so good. I couldn’t find a bank to get Canadian cash and didn’t feel like using my card, so I ended up skipping dinner and looking for a room.

The surprise of the Quebec City parade was the music. When I was last in Montreal, I was there supporting QSC and doing my audio guy gig. After I did my bit, the rep took me bar hopping one night to hear local bands. This would have been about 1989 or so. Every band was a cover band. There was no local “flavor” to the music. If you’d have stepped into a club in Kansas or Massachusetts or LA, you’d have heard exactly the same thing. I expected some French flavor like you’d hear in New Orleans. Montreal was a disappointment. So, when I heard about the 400th Anniversary parade, I expected the same kind of boring US-based music. I was not ready for the bands in this parade.

The art was pretty good, too. The giant historic masks were, sometimes, eerily life-like. Other times, they were caricatures of famous French people from 400 years of history. It was odd being in the middle of something so personal to this city and not understanding a word being said around me. The costumes were mostly of the city’s 200-400 years history. Lots of color, lots of animation, and the city was a perfect place for the celebration.

Quebec is very European in its layout (as best I can tell from my vast experience reading books about Europe). Every restaurant and café had outdoor seating and the food looked incredible. I’m a bread freak and those restaurants had some great looking bread. It didn’t matter, though. It was late when I got to Quebec City. Every room was booked for about 100 miles in all directions. I needed to find a place to sleep. Great party, though.

Every room in Quebec City was booked and I stopped for information and cash and gas. When I tried the bank machine, I discovered my card was rejected. I called my bank, got switched to the VISA folks, and discovered someone had been racking up just-under-$100 charges to my card since August 2nd. After a long, foolish conversation with the help desk guy, I headed for a real bank, checked out a load of cash, and hit the road looking for a motel or a campground.

Motels were all booked for the next 50 miles, but I found a city campground. It's practically abandoned, but it's clean and I don't need much. Tomorrow, I’ll deal with the bank crap. This trip just got a lot more complicated.